JRB Art at the Elms’ May exhibiting artists are anything but ordinary.

“The thing that I’m excited about this particular show is that it’s all women, and they’re all very smart and talented women,” said Trina Morrison, JRB’s gallery operations director. “That seems to be the trend right now to highlight that, but I don’t think that was purposeful, when this show was first thought about more than a year ago, to bring all these highly educated women together.”

Talvacchia — who is scheduled to demonstrate the methods for making her beaded necklaces and earrings to gallery visitors at various times May 26-28 — works as a mathematics professor at Pennsylvania’s Swarthmore College.

“Jaye’s a mathematician by day,” Morrison said, “so her mind works very analytically, and she does this kind of to relax in the evenings after teaching all day. But there’s still kind of that same thinking because it’s so orderly.”

This show, scheduled to run through Memorial Day, is the first large public exhibition of Talvacchia’s work. JRB owner and director Joy Reed Belt convinced Talvacchia to put her work on display at the gallery after buying jewelry from her.

“She’s never done this before,” Morrison said. “This is her first. She’s very shy about this. In fact, she was talked into doing this. That’s the fun part. Joy purchased a piece of her jewelry sometime back, and she really loves it.”

Hammack, scheduled to give an artist talk 2 p.m. May 19, also studied math, and though her paintings are significantly different from Talvacchia’s jewelry, Morrison said an analytical mind is also obvious in much of Hammack’s work.

“I don’t think you ever quit using that part of your brain even when you’re doing your artwork,” Morrison said. “It still comes out in different ways.”

JRB has featured Hammack’s work in several exhibitions, and her paintings can currently be seen on display at several Oklahoma City corporate offices including Farmer’s Insurance, Price Waterhouse Cooper and GE Global.

“The star, if there is a star, it would be Beth Hammack,” Morrison said. “She does abstract paintings, and they’re somewhat, for me, ethereal. There’s like a dreamlike quality to them that I think speaks to a lot of people. I think the attraction is they can fit into almost any home, any corporate location, just any space. They’re very easy on the eye. I think most people are drawn to them because they’re not in your face. They’re just easy to be with … but her messages, I mean, you would not go up necessarily and say, ‘That’s a soft piece of work.’ There are still messages hidden within if you look at them long enough.” 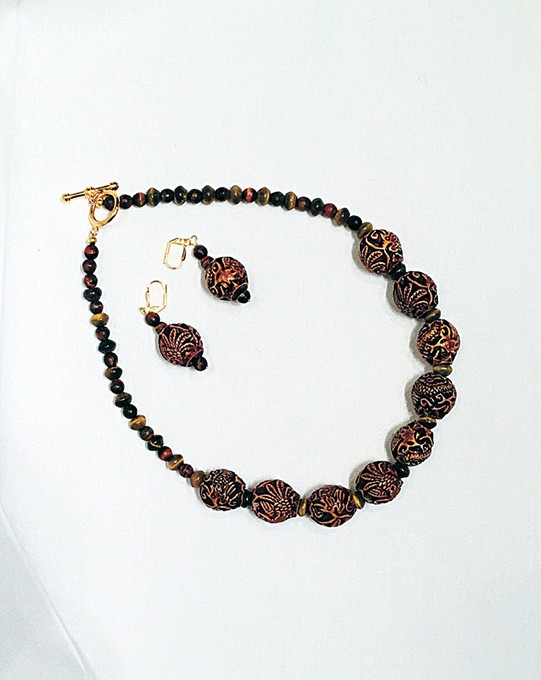 Another artist returning to JRB is Singer, whose latest “stylized and curvilinear” ceramic pieces will be somewhat familiar to people who have seen her work in previous exhibitions, Morrison said, but the newer works also show signs of a different approach.

“You will be able to recognize, I think, that it’s the same artist because some of the pieces, the nonfunctional pieces she brought us last year, are reminiscent of what she’s bringing us this year, but the color palette’s different. It’s so bold and bright compared to what she brought us before.”

Morrison said JRB strives to obtain newer and ideally never-before-exhibited works for their monthly showcases, even when working with popular returning creators.

“Whenever we have a featured artist, we really impress upon the artist that we’d prefer to have new work, work that’s not been out and about,” Morrison said. “It doesn’t always work out that way, but that is our preference, always.”

Rodgers, like Talvacchia, has rarely had her work shown in any gallery, Morrison said.

“Although she’s been around and she’s been selling her artwork for around 10 years, she’s really pretty new to exhibiting her artwork,” Morrison said. “This is probably the biggest exhibition for her career that’s coming up. She’s been real fun to work with, but she’s been very nervous, very excited, but she has really never done this before, had a show of this magnitude.”

Though the artists featured this month represent a range of techniques and experience, Morrison said their creations complement one another when displayed in the same space. JRB’s practice of arranging a new exhibition that typically features two or more artists every month sets “kind of a grueling pace,” but Morrison said she is constantly amazed at Belt’s ability to curate cohesive shows based on conversations with creators about the work they want to submit to the gallery.

“That is the beauty and the brilliance of Joy Reed Belt,” Morrison said. “She can see this in her mind, how these artists will fit together in a show, and I wish that I could crawl in her brain and figure that out. I haven’t done it yet, I haven’t figured it out, but there is a slight brilliance to it that she can forecast just by talking to them [about] what they’re thinking about doing in the future.”

JRB Art at the Elms’ May exhibition