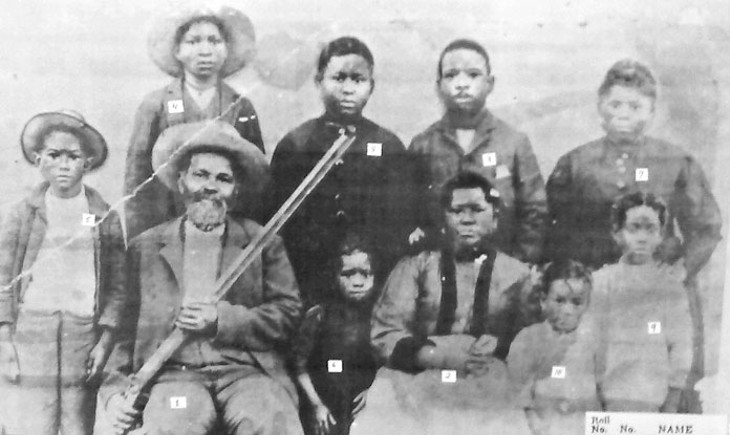 When he looks into the faces of his ancestors in the fuzzy, black-and-white photos on his presentation materials, Ron Graham sees Creek Indians.

But despite treaties passed 150 years ago, Graham is not part of The Muscogee (Creek) Nation; he is working tirelessly to correct what he sees as longstanding injustices against the people known as Creek Freedmen.

“My main goal is to be fully recognized as a Creek citizen within the Creek Nation,” said Graham, Descendants of Freedmen of the Five Civilized Tribes Association genealogy chairman. “We want our treaty rights, human rights and birth rights restored. That is first and foremost.”

Graham’s work on behalf of Freedmen descendants began in 1983, not long after he graduated from Okmulgee High School.

His father, Theodore “Blue” Graham, was on the Dawes Rolls, the registration system created for the allocation of land to heads of households, in the Five Civilized Tribes, including the former slaves and descendants of slaves known as Freedmen.

For Graham, it stood to reason that he could register as a member of The Muscogee (Creek) Nation (MCN), given his status as the son of a Freedman.

But in a 1979 constitutional election, the MCN excluded the Freedmen from participation in tribal benefits.

So when he visited the MCN headquarters, the clerk delivered bad news.

Graham only knew his father as a Native American because that is how Blue Graham identified throughout his life.

Within the Graham family, there were never any questions about how they fit within the MCN, but after the 1979 vote, it was as if the entire family’s history as Creek slaves and then Freedmen counted for nothing.

The story of the Freedmen in Oklahoma begins with the Trail of Tears during which the U.S. government removed thousands of Native Americans, including members of the Muscogee and Creek tribes and their slaves, from their tribal homelands in the southeast to what was then known as Indian Territory.

The Muscogee Creek Nation then developed out of the union of independent small towns scattered from Fort Gibson to the Indian Territory border.

Following the Civil War, the tribes that supported the Confederacy were punished by Reconstruction treaties, which required those tribes to cede land, among other things.

According to the Oklahoma Historical Society, the first concession the Five Civilized Tribes were required to make in the 1866 post-Civil War tribal reconstruction treaties was “to abolish slavery and give the freedmen tribal rights.”

Blue Graham was known in his community as a “traditional.” He spoke Creek and led stomp dances around Henrietta and Okmulgee, and Ron Graham said that he looked Native American.

Graham said one of the greatest challenges facing Freedmen hoping to regain status within the tribes surrounds the omission of Freedmen’s blood quantum from the Dawes Rolls.

Because the Dawes Rolls do not list blood quantum for Freedmen, Graham said they were able to be systematically shut out by the 1979 constitutional election.

But he also discovered through his research that the Dawes Rolls contain serious errors, partly due to slipshod 19th century record keeping.

Graham studied the Dawes Rolls going back to the first Muscogee Creek Freedman listed: Paro Bruner, a 73-year-old former slave, and he discovered instances when one sibling was placed on the Freedmen rolls while their brother or sister was placed on the blood rolls.

Graham said the inequities sometimes came down to the land that a tribe member was allocated as part of the reconstruction treaties, which assigned 160 acres to each tribe member, a move designed to break up communities and weaken tribal power.

“Once they made you a citizen, they gave you land,” Graham said. “It might be good to grow a crop, or it could be worthless on top but have natural resources below. I saw in my studies that once they determined they had natural resources, sometimes they’d transfer them from the blood rolls to the Freedmen rolls. Then, it was easier to steal your land.”

Muscogee Creek Freedmen are not the only descendants seeing their tribal citizenship revoked.

In 2007, the Cherokee Nation made an identical move against Freedmen descendants, which sparked much of the current movement to rectify the situation. Cherokee Freedmen filed suit in U.S. District Court to regain their status.

The case is still pending.

In addition, the Muscogee Creek Indian Freedmen Band, a group of Freedmen descendants, petitioned the Bureau of Indian Affairs to be given status as a separate tribe.

A ruling has yet to be reached on the petition.

To Graham, the issue is straightforward. At one time, according to an 1866 treaty that is still in effect, he was considered a member of the Muscogee Creek Nation. He said he should still be.

“The slaves who were emancipated from down south became Americans,” Graham said. “They’re still Americans. And guess what? They’re not one-eighth Americans; they’re not one-quarter Americans. They are full-blood Americans. We should be full citizens of the Creek Nation.”

Print headline: ‘Nothing but a slave’, Freedmen descendants work to restore their Muscogee (Creek) Nation citizenship.