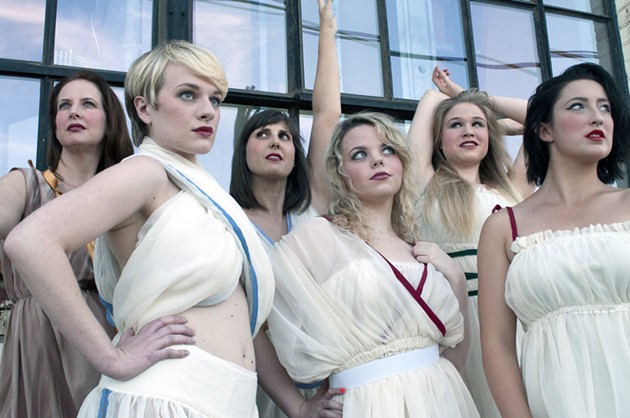 There really is nothing new under the sun. In fact, the plot of Lysistrata could be an actual headline from today’s news: The women of Greece are fed up with the Peloponnesian War, which has been raging for 20 years. The title character, Lysistrata, proposes that the women withhold sexual privileges until the men can negotiate peace.

It has been 2500 years since Aristophanes penned Lysistrata, and things haven’t changed much.

One only has to browse current news to find evidence of women using the same tactics to effect change today. Recently, there have been sex strikes in Japan, Colombia and Russia.

For Tyler Woods, co-founder of Reduxion Theatre Company and director of Lysistrata, the Greek comedy’s timeliness was part ofthe reason he chose it to open the company’s new season. He directed it 10 years ago for a charity performance and is eager to revisit it.

“It’s a play I have always really enjoyed.” he said. “I love the Greeks. It’s very funny and a great translation. It’s the same translation I did 10 years ago with a few updates.”

He has evolved as a director in the decade since, and this play is a benchmark of his growth.

This season’s update includesmusical numbers, fighting and dance all crammed into a minuscule 75 minutes. The play has plenty of raunchy material in it, and within that blue humor is a conversation about how men and women communicate. Both Tyler and his wife, Erin, tendto choose plays that address socially and politically relevant issues, and they want to engage the audience in a dialogue about them.

“[The Greeks] were so good at writing theater that mattered, that spoke to the politics of the time and had the potential to significantly change people’s opinions,” Tyler said. “That’s what we want to do for people.”

Erin is playing Lysistrata in this production.

“These are very serious issues,” she said. “[Aristophanes] said some really wonderful things within this play, which is in contrast to other playwrights of the era [who] were really demonizing women.”

Lysistrata, in the course of the play, is as frustrated with her fellow women as she is the men, but for different reasons. She tells them that they aren’t doing much to combat the negative perceptions of them. Her motivation is not only to end the war but to open up entirely new lines of communication between the sexes — and she succeeds.

In its disguise as a sex comedy, Lysistrata made a revolutionary suggestion about the role of both sexes: In a time when women were distractions or even downright evil, Aristophanes suggested that perhaps the sexes should talk to one another.