“In previous years, we have had as many as 300 guests,” said Emma Dean Kratochwill of the Hispanic Chamber, “but we have to cut it off at 250 this year.”

Tickets to this year’s event can only be purchased in advance due to space limitations at the winery. 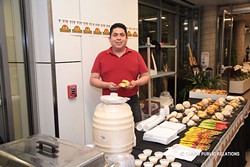 All ages are welcome, and guests age 21 and over will receive drink wristbands.

This year, ¡Viva Sabor! also features the first public screening of award-winning filmmaker Rogelio Almeida Marquez’s new short film Habitos Curiosos (Curious Habits), a 20-minute comedy centered around roommates in what Marquez called a “when the cat’s away, the mice will play” scenario.

The two teamed up for the award-winning La Mercancia (The Merchandise), an official selection for the DeadCENTER Film Festival that also won three awards at the 2013 Redbud Film Festival, an annual event sponsored by the University of Oklahoma College of Arts and Sciences.

La Mercancia also will be screened at ¡Viva Sabor!

Marquez said the film is about a boy who must choose whether or not to raise money for his mother’s surgery by working for a drug dealer. It earned best actor for Omar Godinez, best cinematography for Marquez and audience choice awards at Redbud. 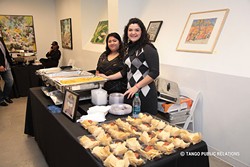 Both projects were filmed in OKC’s Hispanic communities and are in Spanish.

“We’re excited to premiere Curious Habits for the public,” Marquez said. “As part of the event, we will also be promoting Oklahoma City’s very first Latino Film Festival.”

In addition to the movie screenings upstairs, the Samantha Rose Band will perform its blend of pop, country and Southern rock. Rose has been featured in the Chevy Music Showcase series in downtown OKC and has performed across the state.

For more information, visit okchispanicchamber.org or call Linda Piñon at 616-5031.