Angels Foster Family Network provides support to youth, foster and biological parents to achieve success and change the system for the better. 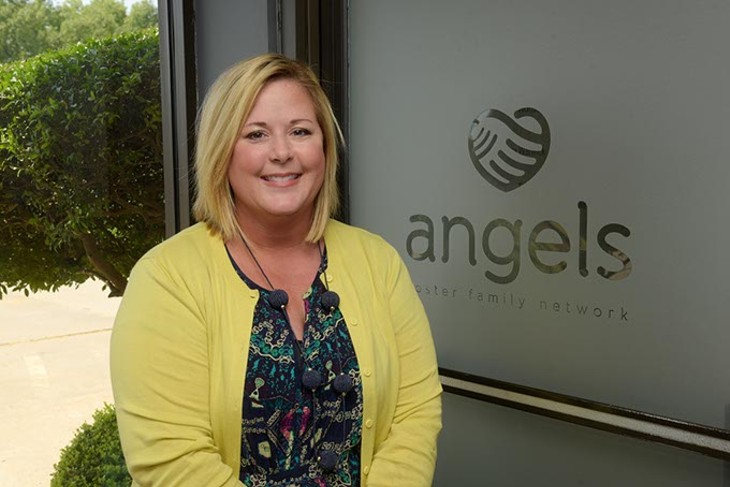 While seated in an Oklahoma County courtroom, Jennifer Abney heard a judge ask, “Was the HALO Project an option for a foster child?” When the judge looked into the gallery and made eye contact with Abney, the executive director of Angels Foster Family Network and one of the founders of the HALO (Healing Attachment Loving Outreach) Project, she nodded her head yes.

“That’s what I like to see,” Abney told Oklahoma Gazette. “It has become part of the culture in foster care. I am so proud.”

Four years ago, Abney was a member of a team — including social worker and counselor Cindy Lee — that launched the HALO Project’s 10-week intensive intervention program for foster and adoptive families. The program, developed in response to the overwhelming emotional needs of children in foster care, was modeled after the trust-based relational intervention (TBRI) therapeutic model developed by researchers at Texas Christian University. The HALO Project trains caregivers to meet the needs of children exposed to complex traumas that can have serious and sometimes lasting impacts on their development and personality.

Thanks to a recent grant of $250,000, the HALO Project and its trauma-informed practices and strategies stands to expand and become the norm in Oklahoma County’s child welfare system, which will ultimately impact the community’s most vulnerable children.

Nine years ago, around the time a national child advocacy group filed a lawsuit against Oklahoma for extreme mismanagement of its child welfare system, Abney and her family relocated from San Diego to Oklahoma City.

Years prior to their move, the Abneys completed the foster family application with Angels Foster Family Network in southern California. After extensive screening and training through Angels, the family welcomed 13-month-old Desi into their home. The Abneys found that Angels provided a variety of supports for their family but also worked closely with Desi’s biological family. One of Angels’ missions is reunification of children with biological parents whenever possible.

Once in Oklahoma, Abney was horrified to learn about Oklahoma’s record of child abuse in foster or group homes, the number of overcrowded shelters and a shortage of foster parents. In 2008, Abney, at the suggestion of her husband, decided to establish the Angels model in central Oklahoma.

“We started Angels out of a desire to change the system,” Abney said in her office at Angels Foster Family Network in Edmond, which serves families in central Oklahoma as a supporting private nonprofit foster care agency to Oklahoma Department of Human Services (DHS). “Angels’ goal is not to be a Band-Aid but to be a solution.”

Angels has provided foster homes to 1,200 children since 2011, Abney said. About half of those children were reunited with one or both of their parents or a relative. Others were adopted, with many going to live permanently with their Angels families.

The organization prides itself on supporting its foster parents, who are restricted to one child or a sibling group. Support varies from enrolling families in TBRI training to foster parents mentoring their children’s biological parents. In addition to that, families work closely with caseworkers who provide a variety of supportive services. Through Angels’ volunteers, families receive freshly laundered donated children’s clothes, homemade frozen casseroles and TBRI-trained babysitters for when foster parents need a night out.

With a vision “to make lasting, transformative improvements to the systems and programs that serve at-risk children in our community,” the Arnall Family Foundation awarded a $150,000 grant to Angels in support of the HALO Project last year. A second grant, awarded in June, increases the number of Angels’ caseworkers, thus increasing services to families.

“As a foundation, we are here to push the envelope and improve systems and organizations like Angels,” said Lindsay Laird, the foundation’s program officer. “We want to make Oklahoma County the model for child welfare in the state and beyond. … Angels does not only a great job of supporting children who are in their care and their foster parents but also biological parents.”

And now, backed by a new $250,000 grant from the Arnall Family Foundation, the HALO Project expands through the formation of the Oklahoma TBRI Collaborative. Nine agencies, including Angels, launched a pilot program designed to show the effectiveness of TBRI in their systems, with the goal of eventually implementing TBRI strategies throughout Oklahoma County’s child welfare system. An expected goal is that a trauma-informed child welfare system will result in faster child permanency, more stable placements and healing for children and families.

“We’ve been able to do so much in such a short period of time to help change the system,” Abney said. “We’ve come a long way, learning and learning in the first five years. The past two years have been … boom. We really dug deep and received incredible support.”