More than 20 organizations are working on a statewide initiative to increase Oklahoma’s animal shelter save rate significantly over the next five years. 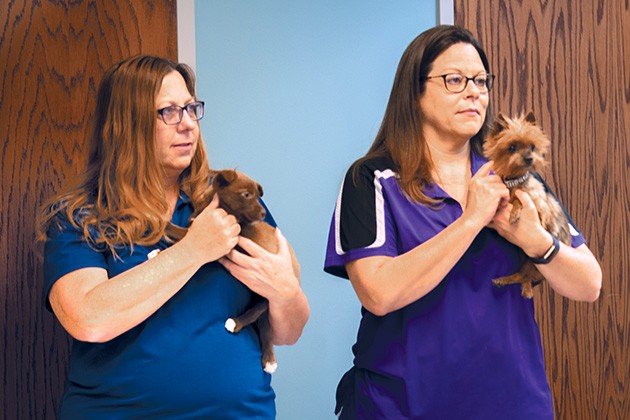 Common Bonds is made up of about 25 organizations with the shared goal of increasing the state’s animal save rate to 90 percent. The group hosted a press conference last week to lay out the ways it plans to achieve its goal.

“We’re all here today because of a problem, and that is the high euthanasia rate of cats and dogs in animal shelters,” said Kelly Burley, the group’s director. “The partners of this initiative have been working over the course of the last two years to really identify a common goal, and that common goal is to raise the live release rate of cats and dogs in animal shelters to 90 percent by 2025. … We’ve been deep into the research phase, deep into the planning phase, and today we’re here to announce that we are moving into the implementation phase of this initiative.”

The initiative, originally known as Save Lives. Unite Oklahoma., has rebranded as Common Bonds as part of the implementation phase launch. The coalition also expanded the group to share resources and “reflect their joint commitment to the wellbeing of Oklahoma’s companion animals.”

“The partners of Common Bonds felt really it was really important to develop a name that better reflected their passion for and commitment to companion animal wellbeing and to help them as they begin their collective work to raise the live release rate,” Burley said. “We’ve seen some improvement in the numbers … but these numbers also underscore that there’s a lot of work yet to do.”

In 2018, nearly 93,000 animals entered the 128 shelters across Oklahoma, according to data from Best Friends Animal Society. Of those, nearly 1 in 4 die in shelters.

Brent Toellner, Best Friends senior director of national programs, said a certain percentage of animals entering shelters will need to be euthanized due to injuries or sicknesses, but that the number should be less than about 10 percent.

“As an organization, we recognize a 90 percent benchmark as statistical measure of success,” Toellner said. “In the state of Oklahoma, there are roughly 13,000 animals that are entering shelters that are healthy, treatable animals that could find a home if there was just more time and resources available before the shelter ran out of space before they had to prematurely end their lives. We really want to work with shelters and organizations and coalitions like Common Bonds to help solve that issue across the state of Oklahoma.”

“As the city and the state is trying to become a better place for people, it’s important that we think about the animals.”
—Jonathan Gary tweet this

Common Bonds identified three key priorities to help realize its goal. One of the most important priorities is encouraging state shelters to report their data.

“We have a working group of shelter managers and other animal wellbeing professionals who are currently working to build relationships with shelter operators across the state of Oklahoma,” Burley said. “The idea is to get more shelters reporting their data so we can improve our baseline numbers and better understand just exactly where Oklahoma is at in terms of the intake numbers and the live release numbers as well.”

Another priority is promoting affordable and accessible spaying and neutering options.

“This procedure is really one of the most important things you can do as a responsible pet owner to ensure the wellbeing of animals,” Burley said. “Access to these services is often a challenge, especially for low-income pet owners and, in a lot of cases, for people who live in rural areas and just don’t have access to these services. We’re in the process right now of really comprehensively identifying what services are available and where, and our goal will be to share that with the public later this year.”

A final priority is generally increasing community engagement through a grassroots network of volunteers across the state.

“We have a community leadership working group that is in the process of identifying potential volunteers, and we’re calling them community leadership partners, to really help us build relationships with city leaders, with shelter operators, with rescues and with the general public to really help drive home the point that the wellbeing of our companion animals in our communities really does speak to the wellbeing of those overall communities,” Burley said. “As part of that effort, we’re going to be launching a series of roadshows or community visits across the state of Oklahoma in 2020 and 2021.” 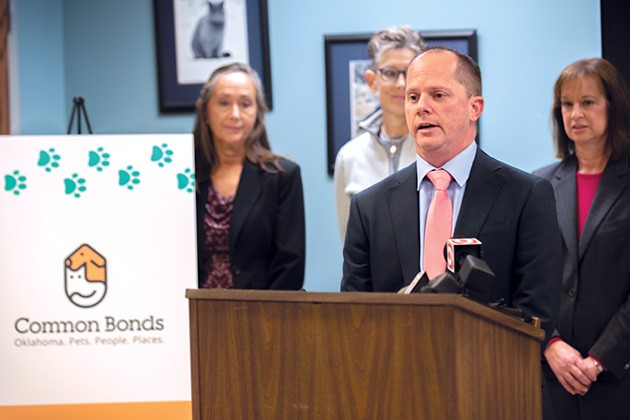 Jonathan Gary, animal welfare superintendent for OKC, is another Common Bonds partner. Gary, who was named Employee of the Year at last week’s city council meeting, said roughly 20 percent of the 93,000 animals entering shelters across the state come into the city’s facility.

“I felt that it was crucial not only that we participate but that we play an active role in trying to change that [save rate], especially here in Oklahoma City,” Gary said. “It’s important to know that this is more than just about the animals. Where animals do well, people do well, and as the city and the state is trying to become a better place for people, it’s important that we think about the animals and how that reflects on how our people live.”

Construction on the current Oklahoma City Animal Shelter facility started in 1995. A second phase was completed in 2001 with improvements in 2008 and 2015. However, the facility was designed with only 37 spaces for adoptions when the shelter averages 100-120 adoptable dogs.

In June of last year, OKC Animal Welfare shelter took in more than 2,000 animals. Of those, 585 were adopted, more than 1,000 were transferred, roughly 200 were returned to owners and nearly 500 were euthanized.

Part of the approved MAPS 4 slate includes $38 million to replace the current facility with shelter spanning up to 67,000 square feet, according to a presentation Gary made to the city. He said the money from MAPS would help remove barriers to humane outcomes and live release goals in Oklahoma City, which will in turn benefit other Common Bonds partners.

“I really hope to be able to share our experience. I’ve been doing this for 20 years now, and over the last 10 years, I’ve been fortunate enough to be able to travel and meet people like Brent and travel the country and learn from the best of the best,” Gary said. “I really hope that that’s what our facility can help do, is bring that experience and the knowledge and the research. We all had to learn somewhere, and I hope that our team can help do that here and in the rest of the state.”

The coalition’s first informational community session is Feb. 11 in Enid.