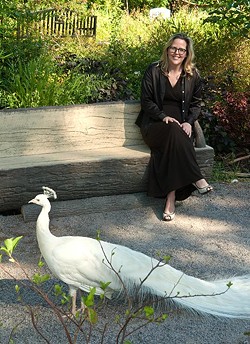 A 2009 study from the National Institutes of Health confirmed that having a pet can help reduce health risks, including lowering your blood pressure and motivating you to be more active.

While many have long believed that animals help take care of people, officials from Oklahoma City-based Kirkpatrick Foundation announced plans to open lines of communication to talk about flipping the proverbial script.

Kirkpatrick Foundation will host The ANIMAL Conference, a two-day symposium on current and future trends affecting animals. The foundation started its Safe and Humane campaign in 2012; its vision is to make Oklahoma the safest and most humane place to be an animal by 2032.

Louisa McCune-Elmore, executive director of the Kirkpatrick Foundation, said this conference — which has been a work in progress over the past year — is the first of the foundation’s triennial conferences designed to bring together “the brightest minds related to animal programming, care, science, protection and sustainability for vibrant presentations and discussions related to this rich field of wonder.” 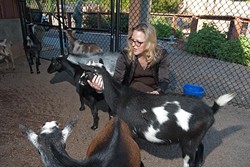 The foundation has shown visible support to the Oklahoma City Zoo and various other animal sanctuaries, humane societies and research institutions. However, McCune-Elmore said the chasm of opinions on animals and their well-being in Oklahoma and across the country has taken on a political bent — so much so that she included a disclaimer for all groups involved with animals and those attending the conference.

“We are not promoting a vegan agenda or aiming to put the agricultural industry out of business,” she said, adding that representatives from animal welfare groups and those from agriculture and farm advocacy groups plan to attend the conference.

McCune-Elmore stressed the importance of dialogue between ideologically opposing groups not only through the Kirkpatrick Foundation’s efforts but also through the mission for the conference.

“Finding common ground is ... difficult, and keeping lines of communication open is one of our approaches,” she said.

The range of support for the conference and foundation is evident by the involvement of foundation-sponsored Oklahoma Roundtable for Animal Welfare, a consultative forum that addresses the most pressing issues facing animals in Oklahoma today. Not only does McCune-Elmore attend that roundtable but representatives from other animal-related organizations also take part. Groups like Central Oklahoma Humane Society, Oklahoma Chapter of the Humane Society of the United States and Oklahoma Chapter of The Nature Conservancy are all represented, along with members from Oklahoma Cattlemen’s Association, Oklahoma Beef Council and Oklahoma Pork Council.

The varied experiences and backgrounds of the scheduled keynote speakers at the conference are evidence of the diversity of opinions represented. Some of those speakers include such visionaries as Jonathan Balcombe, director for Animal Sentience with the Humane Society Institute for Science and Policy; neurologist and public health specialist Aysha Akhtar; stockmanship, horsemanship and safety expert Curt Pate; Diana Webster, president of The Native America Humane Society; animal emotion and human-animal relations journalist and author Charles Siebert; and veterinary expert and behavioral specialist and consultant Vint Virga.

Additional activities are planned for the Sunday night before the conference kicks off. National Geographic photographer Joel Sartore will feature some of his animal-themed photography in a special exhibit, It Just Takes One to Build an Ark, at the Oklahoma City Museum of Art. Sartore is the only photographer in the world to have photographed every species of animal in captivity — more than 1,000 in all, McCune-Elmore said.

A legislative breakfast with senators and representatives from the Oklahoma Legislature is scheduled for Tuesday morning.

According to event literature, the conference is “designed to inspire and inform those who are personally and professionally part of the animal-wellbeing community.” It’s geared toward policymakers, community advocates and leaders, animal shelter workers, farmers, ranchers, veterinarians, animal-science professionals and others who are interested in animal care and quality-of-life civic issues.

The Kirkpatrick Foundation’s involvement with animal concerns began in 1963, when John and Eleanor Kirkpatrick donated more than $25,000 to the Oklahoma City Zoo. Since then, the zoo and many other state and national animal-related organizations have benefitted by the foundation’s donations, which, along with those from the Kirkpatrick Family Fund, have totaled more than $7 million, according safeandhumaneoklahoma.org.

Registration for The ANIMAL Conference continues through Saturday. A one-day registration fee of $199 or a two-day $300 registration fee covers the conference, along with breakfast, lunch and breaks. Attendees affiliated with nonprofit organizations pay only $150 for a one-day fee and $250 for a two-day fee. Scholarships for attendance are available for those who qualify.

For more information about The ANIMAL Conference, including events and offerings or how to register, call 608-0934 or visit theanimalconference.com.

Print headline: Safe and humane, The Kirkpatrick Foundation hosts a two-dayconference to discuss animals in Oklahoma.

The ANIMAL Conference: A Forum of Ideas, Impact and Inspiration