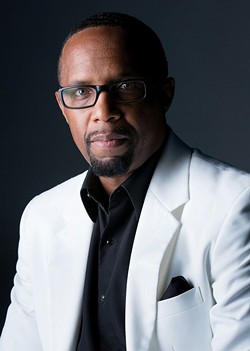 “It’s what he set out be, and I think he accomplished that in his life, with his music, with his art and, of course, with his writing,” said Michael Owens, executive director of Ralph Ellison Foundation (REF), of Ellison’s multifaceted talents.

After an attempt to bring a stage production of Invisible Man to Oklahoma, Owens — who formerly managed Metropolitan Library System’s Ralph Ellison Library in northeast Oklahoma City — spoke with Ellison’s literary executor, John Callahan, and discovered that no foundation existed for the author.

“I began to be concerned about his legacy and moving forward,” said Owens, a self-described “Ellisonian.”

In 2014, Oklahoma City University (OCU) held a centennial celebration in honor of Ellison’s birthday, and Tracy Floreani invited Owens to work on a committee she chaired.

“It became clear that there was so much work that needed to be continued,” Owens said. “I brought together people that are like-minded, and we created the foundation.”

Along with Owens and Floreani, REF’s executive board includes Sen. David Holt, who serves as president, and Leslie Batchelor, vice president. 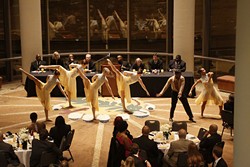 This year’s gala is 6-9 p.m. Feb. 25 at the Oklahoma History Center, 800 Nazih Zuhdi Drive. Tickets start at $75 and may be purchased at ralphellisonfoundation.org.

Attendees of the gala will experience “a night of movement,” according to Owens.

“It taps into the attributes of Mr. Ellison,” Owens said. “We try to make it move in such a way because we believe that Ellison had a lot of harmony, not only in his writing, but in speaking.”

The gala will include recitations of Ellison’s work, jazz music and dance (both contemporary and dramatic).

While the gala is an annual fundraiser, REF hosts other monthly and quarterly events aimed at honoring Ellison’s legacy by promoting literacy and writing skills among young people.

On Saturday mornings at 9:30, REF hosts clinics for elementary school-aged children who struggle with reading at the Ralph Ellison Library, 2000 NE 23rd St.

From 6:30 p.m. to 8:30 p.m. on the second Thursday of every month, REF, in conjunction with OCU, the Red Earth MFA program and Metropolitan Library System, holds a free public writing workshop at the library.

The workshops are led by professors, authors and poets who understand the challenges that can accompany written expression, said Owens.

“It’s right down to the syntax,” Owens said. “We’re dealing with everything that has to do with writing.”

REF events underscore one of the most prevalent themes in Ellison’s writing: visibility.

“He wrote about invisibility, but the problem was that people were not seeing him and what they needed to see,” Owens said. 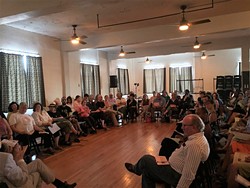 The workshops aim to give confidence to young writers so they “want to be seen … want to be heard,” Owens said.

REF received a grant from Oklahoma Humanities Council (OHC) to implement curriculum inspired by Flying Home, Ellison’s collection of short stories, into Oklahoma schools. The curriculum is projected to be launched this month.

The foundation received another grant from OHC to hold four critical conversations throughout the state. The conversations, a continuation of REF’s In the Light Bulb Room series, will take place in Oklahoma City, Tulsa, Stillwater and Norman.

“That’s another goal of ours: to take this conversation across Oklahoma,” Owens said.

The conversation series’ title refers to Ellison’s novel Invisible Man, in which the protagonist seeks introspection in a room lit by 1,369 light bulbs.

Owens said the novel’s light bulb room is a place of enlightenment, engagement and transformation. The discussion series attempts to create a similar effect by bringing in experts and scholars.

Owens said events such as In the Light Bulb Room foster inclusive spaces for open dialogue.

“That’s what moves the conversation forward. That’s what breaks down stereotypical views of the ‘other,’” Owens said. “That’s where change takes place, when you can have honest, unadulterated dialogue that is healthy and respectful.”

Owens said that although Ellison grew up in a deeply segregated Oklahoma City, the author’s work comments on and transcends racial barriers.

“He used the pen and ink — those were his tools of being a soldier. He didn’t march arm in arm with civil rights leaders, but still, he used a pen and ink to express his aspirations for equality,” Owens said. “Ellison recognized that unless we come together — black, white, Asian, Latino, it didn’t matter — unless we recognize each other’s humanity, the world would never get better.”

A Night with Ralph Ellison