“It’s not so much that the economy is in a tailspin and more people are becoming homeless,” Straughan said. “Its that we are not able to get folks who are homeless housed as quickly.”

About two hours before daybreak, Dan Straughan slowly drives under the freeway overpass as two outreach workers shine flashlights into perhaps one of the darkest corners of Oklahoma City.

Their beams reflect on scattered trash, a backpack and what appears to be a tan blanket concealing something or someone.

Straughan circles his car back and into a nearby parking lot. As executive director of the Homeless Alliance, Straughan and a team of four outreach workers reach into the trunk for bags containing knit hats, socks, blankets and handwarmers. Holding a clipboard in his hands, he guides the team to the overpass, where they began the steep upward climb.

“Outreach workers,” Straughan annouonces. “We are from the city. Can we talk to you?”

A man responds by pulling back the tanned camouflaged blanket to reveal his face. Speaking over the sound of early-morning traffic, he introduces himself as Leo and agrees to take a survey.

After asking routine questions about age and gender, Straughan asks if this is Leo’s first time experiencing homelessness. The former Oklahoma Army National Guard serviceman closes his eyes and nods as his body rests against a thin mattress on the stone concrete.

As the two-page survey ends, the outreach workers pass Leo a hat, handwarmers and a pair of socks. He responds, “God bless you.”

What is the count?

Interactions between local residents like Leo and volunteers were common during the early morning hours of Jan. 26. Eleven outreach teams hit Oklahoma City’s streets, bridges, abandoned buildings and large fields for the city’s annual Point-In-Time count. Designed to give government agencies and nonprofits a snapshot of local homeless populations, the data guides services in the years to come.

Oklahoma City joined cities across the state and nation participating in the Point-In-Time count, which is required for receiving federal funds through U.S. Department of Housing and Urban Development (HUD) McKinney-Vento Homeless Assistance grants.

The local count, organized by the City of Oklahoma City, began at 4 a.m. as volunteers surveyed the unsheltered. Throughout the day, volunteers visited meal sites offered by organizations and churches as they collected data from those who slept on streets, in motels or on couches. Local shelters also provided information.

Volunteers then enter the data, which is also compiled into an annual report, into an online database later accessed by nonprofits and outreach programs.

According to statistics from the 2016 Point-In-Time study, more than 1,500 homeless individuals in Oklahoma City participated in the Jan. 28, 2016 report. A majority of them spent the night in shelters or transitional housing. Additionally, 20 percent “were found sleeping outside in a place not fit for human habitation.”

This data is key to ending homelessness, said Straughan, who also is executive director of the nonprofit Homeless Alliance. In addition to applying for federal grants, the study guides local organizations in their work on issues related to homelessness. For example, Homeless Alliance earned Home Funds from HUD, which helped build WestTown Apartments for veterans and medically vulnerable homeless, which was a population identified through past counts.

“It tells us who the homeless are,” Straughan said. “Back in the 1980s and into the 1990s, a majority of the homeless population was single adult males. We built a system to take care of those folks and we have shelters that are standing today built to care for men alone. As time progressed, we began seeing more women, more families and people experiencing homelessness short-term. Also, homelessness was not always related to issues around poverty, but mental illness and substance abuse.”

Point-In-Time compiles data on the number of displaced veterans, families and youths, in addition to those living with disabilities, mental illness or HIV and AIDS.

These days, a critical resource for anyone experiencing homelessness or near-homelessness is the WestTown Homeless Resource Campus at NW Fourth Street and N. Virginia Avenue, built in 2011. Workers representing a variety of nonprofits assist veterans, families, youth and clients facing mental illness and chronic homelessness through programs established through grant funding.

Since 2012, more than 700 people have been housed because of the services and programs offered through the center, Straughan said.

When Oklahoma City police and Homeless Alliance officials began tracking homeless camps and gathering spots in preparation for the count, they noticed more pinpoints on the map than the year before. For some, like Straughan, it was a sign to expect a higher count for 2017.

“There are a couple of things at work,” Straughan explained. “One is our collective failure to invest appropriately in mental health and substance abuse treatment. The other, for Oklahoma City, is the increase in the cost of rent and freezing housing choice vouchers [that subsidize rent for low-income individuals and families].”

A downturn in the state’s economy also left many Oklahomans jobless or earning less, which creates a greater demand for the vouchers, he said.

“It’s not so much that the economy is in a tailspin and more people are becoming homeless,” Straughan said. “Its that we are not able to get folks who are homeless housed as quickly.”

While there might be more camps, there are fewer people in the camps, Shadid said. He recalls visiting camps five years ago that included dozens of tents and people asleep in sleeping bags nearby. Outreach workers could collect dozens of surveys in a single location.

“Everywhere we went the camps were large,” Shadid said. “You didn’t find one person — you found at least someone in every single tent.”

Shadid believes many living in the larger camps have been housed. 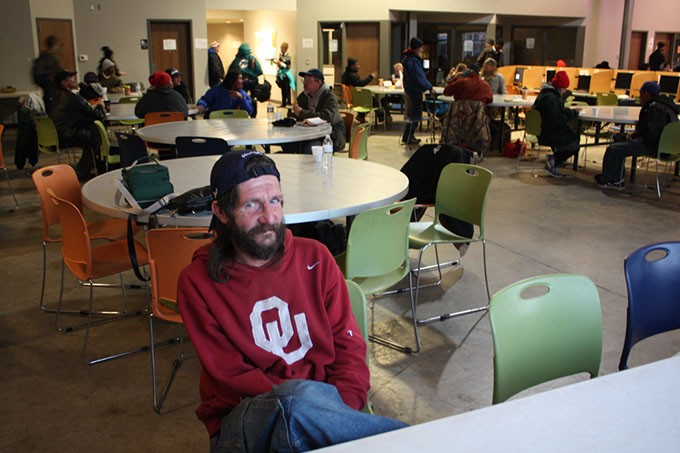 When an outreach worker asked Vincent Jameson where he slept the night before, he responded: the streets.

It’s been his answer for the past year, shortly after an injury on the job. Jameson said he fell when carrying a lawnmower, causing an injury that required shoulder surgery and a steel plate in his upper arm. No manual labor for six months put him out of work and a home.

“The streets are not very nice,” said Jameson, who spent the majority of his career as a pressman working on newspaper presses in Oklahoma, Nevada, New York and North Carolina. “People take advantage and you don’t know who you can trust.”

It was a lesson learned the hard way by Jameson, who trusted a woman who later stole from him, including his wallet with his ID and social security card.

“It’s kind of like being a nonperson,” Jameson said as he explained why employers won’t hire him without a valid identification card.

“Don’t take anything for granted,” he said.

At the WestTown campus day shelter, which became his second home, Jameson received the help he needed to apply for another copy of his birth certificate. With a smile, Jameson said the certificate arrived this week. After a visit to the social security office, he will apply for jobs, get back to work and back into housing.

Help is out there

Back on the streets, Straughan and team 11 wrap up a final survey with Shawn, an Oklahoma City resident who has been homeless for three years and panhandles for income.

After it’s complete, Straughan asks another question: Have you visited the WestTown campus? Shawn nods, but says its been over a year.

“When you come back, ask an advocate for you to be assessed,” Straughan advises. “You are chronic homeless — you qualify for services that you didn’t qualify for a year ago.”

Print Headline: Everyone counts; Tallying those living on the streets shapes city and nonprofit response to serving the homeless and securing federal aid.