For a new gallery, Paseo Arts Festival is a godsend.

Bombs Away Art Company owner Dustin Oswald said he’s not sure what to expect, but he hopes it will be big.

“I leased the gallery (3003A Paseo Street) in August, and we opened last October,” he said. “They estimate more than 60,000 people come through the district that weekend. So my doors will be open.”

Paseo Arts District director Amanda Bleakley said it’s a big draw for the area. The festival, which runs Saturday through Monday, will bring in more than 80 visual artists in addition to the Paseo’s 22 existing galleries.

“We’re an arts area that celebrates the arts monthly during First Friday,” Bleakley said. “And then once a year, we do it up really big.”

Paseo’s festival is different from the Festival of the Arts downtown, she said. They might share a few artists, but for the most part, it’s a different experience.

“When I’m at a festival, whether it’s the heat or the weather, I feel like it’s hard to give my full attention to the art,” he said. “That can make it difficult to spend $400 on something you’re not sure about.”

Bombs Away specializes in contemp-orary pop culture prints and T-shirts with prices hovering between $10 and $40.

This year will be the first for the Mustang Brewery Beer Garden. Bleakley said it was important to bring craft beer into the festival and for it to be local.

“[The beer garden is] also going to have a smaller third stage,” she said. 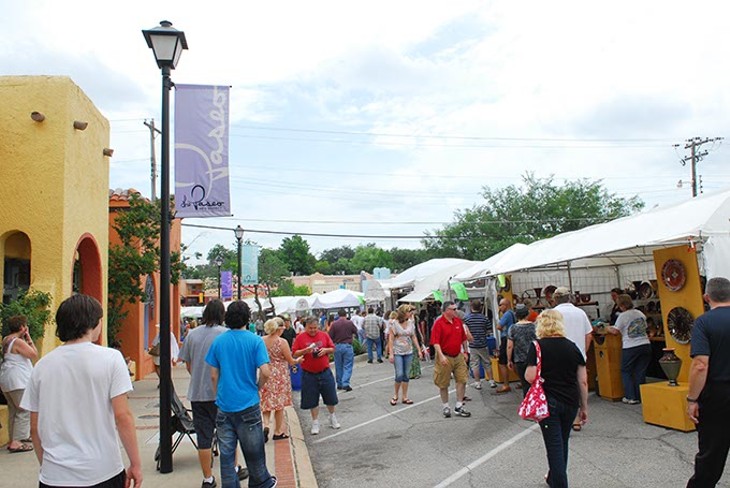 The area will be devoted to solo musicians playing more intimate shows.

Weather in Oklahoma is always unpredictable, but it’s at it’s most volatile in the late spring. So if May showers arrive, the south stage at Picasso Cafe will be covered this year, including an area for visitors to enjoy the music while sheltered.

There’s also a wide variety of acts playing the north stage at Sauced on Paseo. And if parents are looking for something to do with the kids, SixTwelve will be running a children’s art area.

And it’s not an art festival without food. While Picasso Cafe, Paseo Grill and Sauced will see their fair share of diners, Paseo Arts Festival will also host food trucks — including a few visitors from out of state — and a mix of traditional and exotic cuisines.

If parking is a problem, take the shuttle, running every 15 minutes to

the parking lot at First Christian

Print headline: Celebrating creativity, Paseo Arts Festival is back for a weekend of culture and good times.