When you pull up to Anthem Brewing Company, 908 SW Fourth St., there’s no mistaking what’s happening inside. 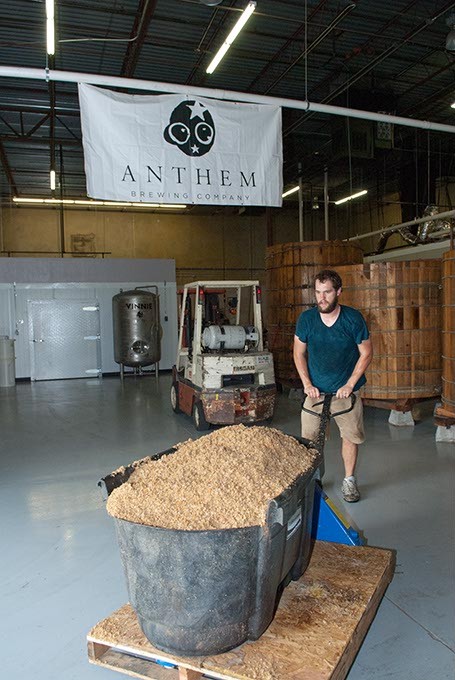 When you pull up to Anthem Brewing Company, 908 SW Fourth St., there’s no mistaking what’s happening inside. The warm, yeasty smell reaches you before you know you’ve arrived.

The unassuming white building could be mistaken for a traditional warehouse if it wasn’t for a guy walking out the door carrying a vat of what looks like chewed oats rather than boxes. It’s steaming hot and will sit outside until the grains are cooled.

Anthem founder and brewmaster Matt Anthony explained that this used grain will go to a local pig farmer. Since the protein in it doesn’t benefit the brewing process or his beer, it will supplement the pigs’ diets. Little in Anthony’s beer-making process goes to waste.

This type of cooperative attitude is the rule rather than the exception with local microbreweries.

“It’s great. If we have a problem, I just call up Tony [Tielli] at Roughtail [Brewing Company] or Blake [Jarolim] or Patrick [Lively] at COOP Ale Works, and they’ll help me out,” Anthony said.

Anthony came by his trade through his interest in making beer and a gift. He got started home brewing with a Mr. Beer home brewing kit from his girlfriend, who is now his wife.

“The hobby just became more and more involved until, in 2008, I decided that it’s what I wanted to do,” he said.

He spent several years traveling around the United States and Europe learning the craft.

“I worked for years and then wrote up a business plan,” he said. 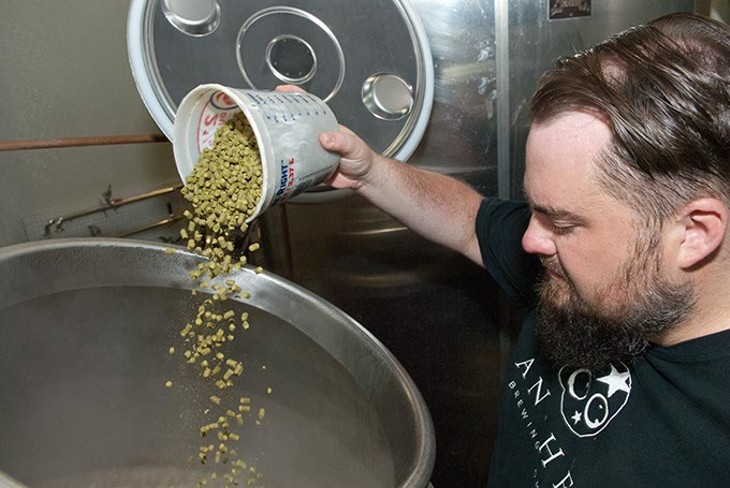 “These beers are our anthem to the world; it’s a representation of our individualism expressed."

They each have names that Anthony chose based on their personalities — similar to how he named his brewery.

The uroboros, or an image of a snake eating its own tail, is a symbol of immortality and renewal.

“[It’s] the whole idea of rebirth and renewal and the idea of people taking a stout and making it their own. We wanted to do a Belgian influence with the candy sugar and the oak,” he said.

The brewery ages some of its beers in oak casks, which are more often found in wineries.

When he started his company, he wasone of few who used old whiskey and wine barrels as his aging vessels. The idea caught on, and now there is a shortage of such barrels industry-wide. The barrels impart those characteristics into the beer.

“We’ve got the Uroboros aging in bourbon barrels; [they’re] really neat because they impart this vanilla and coconut flavor along with the oak,” Anthony sad. 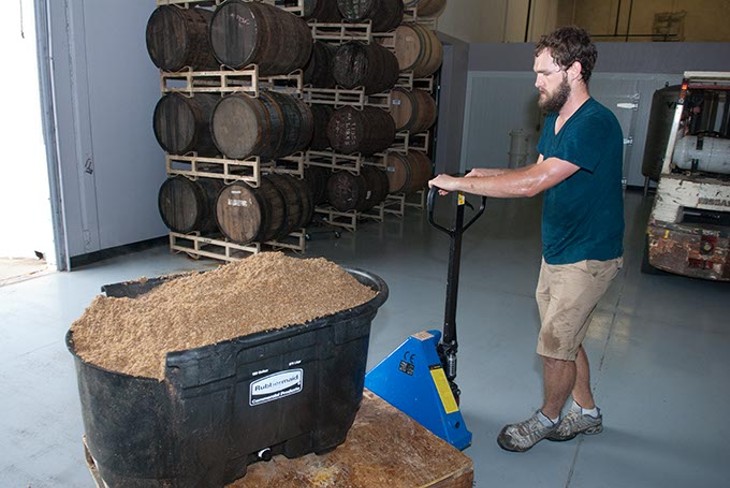 Inside the brewery, there are impressive foudres (pronounced “fooders”), oversized oak casks that look like King Kong-sized barrels. The brewery uses these primarily to age the sours, which can take up to two years to make from start to finish. Sour beers, in all their time-consuming glory, are a passion for Anthony. He’s also excited about combining new ingredients to come up with new taste nuances for his beers.

“The one that we’ve made recently, a saison, it’s with Earl Grey Tea,” he said. “It tastes nothing like the tea, of course, but there’s this completely other flavor in the beer.”

He has a deep affection for a good white beer and feels that most are overly hoppy or not spiced enough, that is not the case with Anthem’s Arjuna beer.

Anthony and brewing partner Will Perry frequently work on new, limited- edition beers to unleash on the public.

“Ultimately, we want to end up with six year-round beers and then keep coming up with one-offs. We come up with them pretty quickly. We’ll put out about one or two specialty beers a month,” Anthony said.

The brewery will soon begin giving tours, complete with samples. In the meantime, Anthem Brewing Company beers can be found on tap at about 50 locations across the state. Visit anthembrewing.com for the “tap finder” map.

Around 120 retail liquor stores also carry Anthem bottled beers. The trick is, once you get your hands on a limited edition you like, buy all you can, because you might not see it again.