Anti-abortion protests were met with bewilderment, resistance and tolerance

“Six thousand babies are murdered in Oklahoma every year!”

Members of the Abolitionist Society of Oklahoma, an anti-abortion group, concluded a week of demonstrations across Oklahoma City’s core.

In the Paseo, reactions were mixed.

“The most important test to anyone’s commitment to free speech is whether or not they would defend the speech rights of individuals or groups espousing messages that listeners find vile, reprehensible or disturbing,” said Ryan Kiesel, executive director of American Civil Liberties Union of Oklahoma (ACLU).

The ACLU, a nonprofit, nonpartisan organization, has offices in the district.

Some gallery owners and merchants feared the anti-abortion group’s presence might ruin the evening.

By night’s end, however, it was apparent that it didn’t.

Abolitionist Society of Oklahoma demonstrators manned each corner of the district’s central intersection at NW 29th and Paseo streets as they chanted and waved vivid photographic banners and signs. They handed out literature to passersby as they shouted, “Unborn babies have rights, too!” and “Abortion is murder!”

Some visitors shrugged it off or watched it as a form of street theater. Others avoided the intersection. Some also shouted back. The usually mellow, artsy social event’s mood became tense.

“[Even so,] I had an amazing sales evening,” said Betsy King, owner of a shoe shop she shares with clothier Marla Cook.

Her shop sits closest to the intersection where police lights flashed through the night.

“I was pleasantly surprised at how it did not affect my business,” King said.

She said they invited a police department representative to the district’s next merchants and gallery owners association meeting to advise them on what they could do regarding any future demonstrations.

Police explained legal conduct: Demonstrators cannot touch anyone, nor can they block anyone’s access to streets, sidewalks or shops.

King was philosophical about the possibility of any type of demonstration happening again in the district.

“I hope it doesn’t happen again, but if it does, we’ll roll with the punches,” she said. 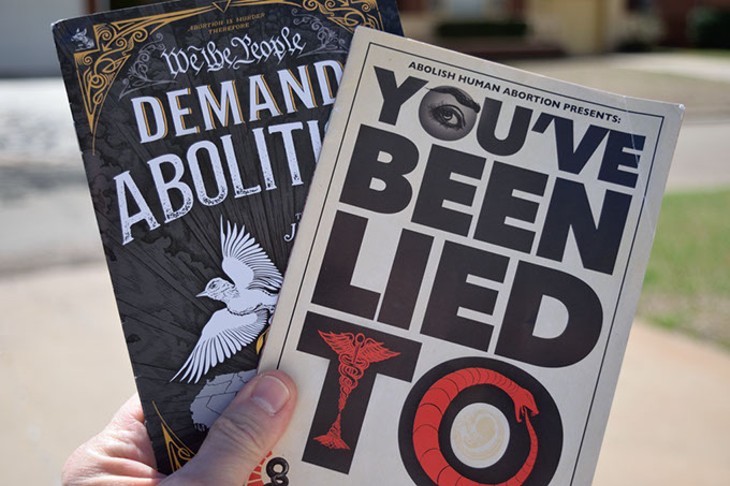 Perhaps the biggest question that Friday night was, “Who are those people?”

They are members of Abolitionist Society of Oklahoma, said Katherine Hunter, wife of co-founder T. Russell Hunter. The group is part of Abolish Human Abortion (AHA), a national network they helped found. Its membership has grown to include chapters in several states.

They were not there to be belligerent, Hunter said, but to “change minds and hearts.”

“We approach people here. We want people to talk to us,” Katherine Hunter said. “We want information in the hands of people.”

Later, Norman native T. Russell Hunter spoke to Oklahoma Gazette about AHA. The group uses the terms “abolition” and “abolitionism” because it believes their cause resembles the pre-Civil War movement to abolish slavery.

But few Paseo guests understood why the group was there beyond its obvious opposition to abortion. Russell Hunter said AHA was protesting ACLU of Oklahoma.

Earlier this year, AHA filed a petition initiative that, if successful, would have put to a public vote its proposal to amend the state constitution to outlaw abortion. The ACLU filed a legal challenge in the Oklahoma Supreme Court that said AHA’s proposal was unconstitutional because it would criminalize all abortions without exception.

“This court has explicitly and repeatedly held that an initiative whose enforcement would violate federal constitutional protections for reproductive liberty is invalid and cannot appear on the ballot,” the ACLU’s legal challenge asserted.

Kiesel told the Gazette the group’s petition should be invalid because the U.S. Supreme Court previously established that abortion was a legal medical right.

He also defended AHA’s right to protest, even if it protested Kiesel’s organization.

“So long as they are acting within their First Amendment rights, they have every right to be there,” he said.

But Russell Hunter said he sees an even bigger problem with the “incrementalism of our pro-life Legislature”: AHA equates abortion with murder.

“We push legislation that clearly says that abortion is wrong,” he added.

He said his group isn’t popular with what he called “pro-life” proponents, especially in the Legislature, which has “made too many compromises to allow some types of abortions.”

“We are for the complete abolition of abortion,” he said. “All incrementalism does is siphon off energy that is needed to end the practice of abortion.”

He said the pro-life legislative trend is pointless and lawmakers should clearly stand against all abortion instead of passing laws that make it harder for people to have the procedure.

Print Headline: Life mission, Abolitionist Society of Oklahoma protests were met with a combination of bewilderment, resistance and tolerance.