The Boston Tea Party — the first recognized act of organized rebellion and protest in the country — was a catalyst that spawned the American Revolution and establishment of an independent nation. With freedom and liberty as the underlying ideals of democracy, America’s history features a succession of social movements, including abolitionism, the women’s suffrage movement, civil rights marches, anti-war protests and the anti-abortion movement.

Although social movements can vastly differ from each other, they share the characteristic of responding to an injustice, just like the Boston colonists tossing chests of tea into the harbor in a protest against taxes.

Following a year of local and national demonstrations over police violence, oil and gas pipeline development, immigration reform and women’s rights, Oklahoma lawmakers are considering legislation to curb mass protests on private property. The two bills passed to the Senate in February include House Bill 1123, which seeks to protect critical state infrastructure by enhancing trespassing laws, and House Bill 2128, which would hold protesters and individuals or entities that financially aid them liable for any property damage.

While the words “protest” and “demonstration” aren’t used in the bills, both bill authors, when on the House floor, framed Oklahoma’s need for such legislation by citing protests against pipeline development near tribal lands in North Dakota.

“Across the country, we have seen time and time again these protests have turned violent, these protests have disrupted the infrastructures in those other states,” Chickasha Republican Rep. Scott Biggs said on the House floor when introducing HB 1123. “This is a preventative measure … to make sure that doesn’t happen here.”

While HB 1123 is pitched as a measure to deter people from destroying or tampering with infrastructure and HB 2128, authored by Moore Republican Rep. Mark McBride, is a tool for property owners to bring lawsuits against trespassers and their event organizers, social advocates see both measures as efforts to squash free speech.

“This violates the fundamental principals that America was founded on,” Sierra Club Oklahoma chapter director Johnson Bridgwater told Oklahoma Gazette. “For those of us who work with Oklahomans to practice democracy and for them to be treated or dealt this hand by practicing democracy is appalling.” 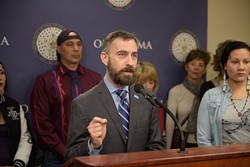 Lawmakers in more than a dozen states are considering measures similar to Oklahoma’s HB 1123 and HB 2128. The bills, which are described by their authors as improving and protecting infrastructure, public safety and order, have received backlash from political and social advocates, who view the legislation as anti-protest and intimidation meant to stifle First Amendment rights.

“It ups the penalties for people wanting to engage in nonviolent civil disobedience,” said Parr, who has represented environmental activists.

If HB 1123 were to become law, under the threat of liability, organizations would opt not to organize demonstrations, Parr warned. Such a law could encourage provocateurs looking to violate the law and thus hurt an organization.

“There is no other purpose of putting that provision in other than to intimidate and threaten an organization that might organize a nonviolent, nondisruptive political protest,” Parr said.

Speaking on the House floor, Biggs said, “The fines are so steep because this is a deterrent to make sure these people don’t destroy, don’t tamper with and don’t interfere with clean, fresh drinking water or from the lights coming on when you flip a switch.”

Biggs did not return a call from the Gazette requesting further comment.

Bridgwater argued Oklahoma’s HB 1123 proposal could create overlap between federal and state laws, as the U.S. Department of Homeland Security is responsible for protecting the nation’s power grid and other critical infrastructures. The Pipeline and Hazardous Materials Safety Administration monitors and enforces regulations surrounding pipelines.

“The first amendment protects our right to stand in the Capitol rotunda,” Kiesel said to Oklahoma Gazette as he stood inside the Capitol. “It also protects the rights of Oklahomans and Americans to engage in speech and activity, knowing that if they engage in civil disobedience, that the penalties they face should not be disproportionate. If we chill and keep people home, away from the cameras and away from the public they are trying to wake up on any number of issues, we are doing a real disservice to our democracy.”

“This bill does not stop ... protestors,” Biggs said. “This bill doesn’t say you cannot protest. All this bill says is you cannot trespass onto private property or damage critical infrastructure.”

Print headline: Debating speech, As Oklahomans take to demonstrating for and against everything from human rights to pipeline development, state lawmakers take a preemptive look at intensifying trespassing laws.

Last month, after nearly an hour of discussion on the floor, Oklahoma House members passed House Bill 1123 as an emergency measure by a vote of 68 to 25. Now headed to the Senate, the five-page bill calls for creating a new section of law to Oklahoma Statute Title 21 called Crimes and Punishment.

The legislation proposes punishments for those who enter the property of a critical infrastructure facility without permission. According to HB 1123, an individual who walks on to such a property would be considered, upon conviction, guilty of a misdemeanor punishable by a fine of not less than $1,000, by six months’ imprisonment in the county jail or both. If a court determines the individual intended to “willfully damage, destroy, vandalize, deface, tamper with equipment or impede or inhibit operations of the facility,” they will be guilty of a felony and punished by a fine not less than $10,000, one year imprisonment or both.

Additionally, individuals who willfully damage or tamper with equipment of critical infrastructure face felony charges punishable by a fine of $100,000, imprisonment of no more than 10 years or both. If an organization were “found to be a conspirator with persons who are found to have committed any of the crimes,” the organization would be fined 10 times the amount of individual fines. In the case of a felony tampering charge, an organization could face a $1 million fine.

House Bill 2128, which would create a new law under state civil statutes, would allow for a person “arrested or convicted of trespass” to be held liable for any damage to personal or real property. If another person or entity “compensates or remunerates a person for trespassing,” the person or entity could be held liable for damage to personal or real property. The House passed the bill 68-23.