Oklahoma City’s first food hall, The Collective Kitchens + Cocktails, is set to open at the end of June. 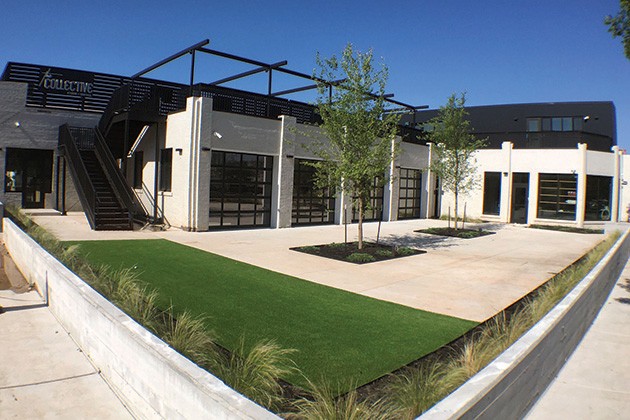 After months of construction and financing delays, The Collective is set to host a soft opening in late June with regular service set to begin soon afterward.

The two-story space is made out of three once-forgotten buildings at the corner of NW 10th Street and Harvey Avenue. It features two full-service bars, rooftop and courtyard patios and coffee service.

Unlike other food halls that charge restaurants up front to enter the space, Collective co-founder Truong Le wants it to serve as a restaurant incubator. The Collective offers its kitchens a turnkey operation and marketing in return for a portion of sales.

It is set to open with 10 kitchens, with another concept to open in the coming weeks and months. Here is a look at the restaurants that will open The Collective:

Chef Beth Ann Lyon has devised menus all over the city; now it is her turn to take center stage with her concept that debuted as a food truck last year. She opened Kitchen No. 324, wrote the original menu for The Press, Anchor Down and many others. Lyon, a Coach House graduate, is a proponent of what she calls intuitive eating.

“I want to nourish people through high-vibrational foods,” Lyon said in a promotional video for The Collective.

The farther food gets from its original source, the less nutrients it offers the consumer. This applies to food that must travel long distances or has been heavily processed or cooked in a way that robs it of most of its value.

Lyon eats mostly a plant-based diet, and that will be reflected on Black Cat’s menu, with an emphasis on using raw nuts, vegetables and fruits as often as possible, but the restaurant will also provide plenty of meat-based dishes that are sourced locally, organic and grass-fed at every possibility.

Oklahoma City is more than familiar with chef Vuong Nguyen after the Coach House program veteran became the original chef at Guernsey Park, developed the menu at Chae Modern Korean and served breakfast at Bonjour. He also now operates the re-vamped menu at Ur/Bun.

“I’m staying true to the flavors; I’m bringing bold Asian flavors and not masking anything,” Nguyen said. “The uniqueness of it is going to be my spin on it.”

Café de L’Asie goes around the world in one dish, like Nguyen’s version of pad thai, which takes fresh Italian-style pasta and finishes it with mango salsa and chicken. Thịt kho tàu is a staple in many Vietnamese homes, but Nguyen makes the braised pork belly that is then caramelized his own by combining pickled vegetables and a fried egg.

You’ve probably seen The Flying Pig BBQ’s bright orange food truck at events or driving around Oklahoma City for years, but now you do not have to track it down.

The Flying Pig offers pulled pork, chopped brisket, pork ribs, smoked chicken, sausage and bologna. Its namesake sandwich includes a hot link and smoked sausage wrapped in bacon that can be topped with macaroni and cheese for 50 cents extra. The B-52 takes all of these ingredients, including a bed of macaroni and cheese, and tops it with pulled pork.

It also offers loaded baked potato with its selection of smoked meats or, if you are looking to cut carbs, a loaded avocado with coleslaw and Sriracha mayonnaise.

Ruben and Kristal Pacheco operate Fried Taco in Edmond, last year’s nominee of for Best food truck in Oklahoma Gazette’s Best of OKC readers’ poll. Fans of its Puerto Rican and Caribbean fusion dishes now have a permanent place to find them.

As the name implies, Fried Taco’s signature item is fried tacos, but it is not just a crispy taco shell filled with ingredients. Different meat and plant-based fillings are loaded into the tortilla as it is fried, allowing the meat and cheese to fuse with the crispy shell for a unique bite.

In addition to tacos, it offers dishes from across the Caribbean, like mofongo, a Puerto Rican staple for which mashed plantains are combined with pork before being topped with a flavorful broth. Be sure to also try its drinks like mango coconut and coconut lavender lemonade.

“We don’t have any other food like this in the metro area, and we have a nice, relaxing vibe,” Ruben Pacheco said.

A farm-to-table restaurant does not have to involve an expensive meal eaten in a rustic-style restaurant. Chef Gary Arnold and team want to take Oklahoma products and deliver fine-dining quality food in a casual and quick setting.

“I like the idea of inspiring future generations of chefs to work not just in a fine dining atmosphere, but to be able to branch out and use your talents to feed people of all walks of life,” Arnold said.

Local-homa serves contemporary American dishes that will change with the seasons and seasonal availability. Its compressed watermelon salad with berries and mint impressed Collective judges and will be seen with other dishes like a local chicken breast topped with poulet sauce and served with sweet potato melange, spinach and oyster mushrooms.

Oklahoma City’s first standalone poke concept is making the move from the bottom floor of the old Guernsey Park building to The Collective. Poke is one of the fastest-growing food trends in the continental U.S., after it started to make its way from Hawaii in the last two decades.

The Hawaiian take on sushi allows fresh tuna or salmon to be quick-marinated in oil and vinegars, but customers can choose other options like cooked shrimp, crawfish, seared Spam (a Hawaiian staple) and tofu.

A variety of vegetables like edamame, cucumber and mango salsa with a dollop of guacamole make a poke bowl one of the most refreshing and nutritious meals in the food hall.

Customers can choose from pre-selected bowls or build their own with a base of rice, lettuce or a mixture of both. The concept in The Collective will also offer regular sushi and sushi burritos.

Oklahoma native Michael Spencer has been all over the country, working in some of the best kitchens at places like Beverly Center in Los Angeles, The Venetian in Las Vegas and more. He returned to Oklahoma City to help open The Cheesecake Factory and has found a new home serving Dutch babies, a German-style puffed pancake.

“We went with that name because that’s what I hear from people when I set them down in front of people most of the time,” Spencer said.

The Dutch baby, cooked in a cast iron skillet until the egg and butter-heavy batter begins to puff along the edges, is the perfect vehicle for breakfast or dinner. It can be topped with lemon curd, blueberries and whipped cream for breakfast or an after-dinner snack. Savory options include a take on lox with smoked salmon, capers, red onion and cream cheese and pulled pork with mango chutney and candied bacon.

You also wont have to wait for Oklahoma City Festival of the Arts to get a version of Strawberries Newport, as it will be on the menu at Oh Baby.

This concept from brothers Bryan and Caleb Lewis enters The Collective with a lot of momentum, after securing investment on the hit television show Shark Tank.

You might be used to normal waffles made from a quick-mix batter, but these waffles are made in the Liege style, with a 24-hour fermented yeast dough that has bursts of Belgian sugar.

“They are loaded up with pearls of Belgian sugar that melt down and give you a sweet crunch in every bite,” Bryan Lewis said.

Press Waffle Co. offers selection of sweet and savory options, like chicken and waffles or a Monte Cristo waffle sandwich with smoked turkey, ham, white American cheese and berry jam. The Southern Belle is lemon curd, blueberries and whipped cream. Customers can also build their own waffle with different sweet and savory toppings.

The Collective is the fourth food hall location for Press Waffle Co., after opening three locations in Texas.

Chef Patton Simpson builds on his background of living in Honolulu and experience cooking in Oklahoma City at places like Ding Asian Fusion and Musashi’s to bring his Hawaiian-inspired concept to the Collective.

The shaka sign is also known as the “hang loose” sign, and you’ll want to relax after trying Simpson’s take on Hawaiian chicken with grilled pineapple and ohana sea scallops with pineapple and mango chutney and macadamia nut crumble.  The powerhouse of the menu is a Hawaiian classic, the loco moco, which is white rice topped with a grilled hamburger patty, fried egg and gravy.

“It’s a lot of citrus taste that is very easy on the palate with some savory taste and a few spicy items, but it’s more soothing than anything,” Simpson said.

While most people think of brioche as a buttery piece or bread or roll for a sandwich, the dough can also be turned into a doughnut, but it is much easier said than done. Owners Ryan and Morgan Kennedy discovered the brioche doughnut while traveling overseas, and when they could not find the sweet treat upon returning to the States, decided to take matters into their own hands.

“When I came back home and thought about getting a doughnut treat, this is what I imagined,” Ryan Kennedy said. “They are not in Oklahoma City, so I was determined for how to make them for myself.”

The key to Theo’s unique doughnuts is the lengthy fermentation process. Each process hits the mixer 24 hours before it is eventually fried, for a huge, fluffy doughnut that is extra buttery.

Sweet doughnuts are served glazed or filled with freshly made crèmes and jelly, like vanilla bean, chocolate hazelnut and a seasonal jam. Theo’s also offers a rotating savory doughnut.