Chae Cafe & Eatery vastly improves on the food in its departure from the All About Cha chain. 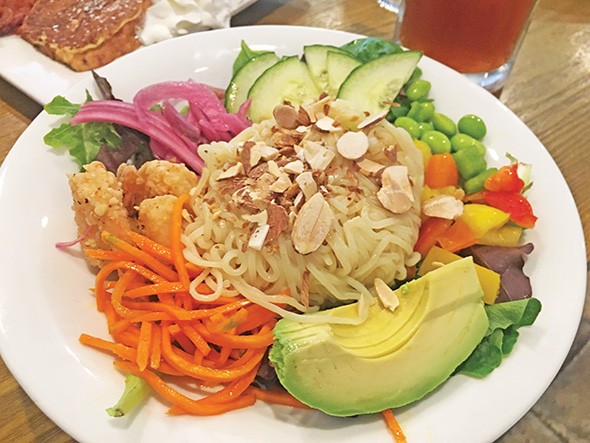 What works: The short rib Benedict and poke are distinct and delicious.
What needs work: The menu says multiple waffles, but only one came with the order.
Tip: Order extra dressing with the ramen salad

The proliferation of social media and millennials hitting their post-grad years with spending cash no doubt played a role in the second wave of brunch the past decade — from continental buffets and menus with clear dilatations between lunch and breakfast items to crossover Frankenfoods made with locally sourced ingredients designed to get Instagram likes.

If the elevation of brunch from a meal reserved only for holidays or a post-church outing represents the second wave of brunch, Chae Cafe & Eatery, 7300 N. Western Ave., is ushering in the third wave with the ability to get brunch seven days a week until 10 p.m.

Chae Cafe opened in the second half of 2018 when owner Daniel Chae took his franchise All About Cha location independent by bringing menu items from Chae Modern Korean that served its final meal earlier that year.

Chae’s footprint has consolidated as he sold his stake in Ur/Bun to chef Vuong Nguyen, who developed the menu at Chae Modern Korean, but the restaurant’s legacy continues at the cafe with dishes like short rib Benedict, a cheddar biscuit with kimchi pork belly gravy and DMZ Waffle, which tops a waffle with fried chicken and more of the pork belly gravy.

The interior at Chae Cafe is basically the same as it was as All About Cha with a fresh coat of blue paint, but the food is on an elevated level and the coffee and tea make a commitment to organic and local providers.

"Chae Cafe’s version of poke takes the popular dish that is a mash-up of Japanese and Hawaiian flavors and
adds a Korean twist." tweet this

I was excited to see it using KLLR Coffee, which is my favorite local coffee roaster. I am a fan of its Café con miel, which has nice notes of honey and cinnamon.

As Chae Cafe gets close to completing a year in business, it has already made some menu additions, like adding the ever-popular iron bibimbap from Chae Modern Korean (and briefly Ur/Bun) to its menu, which is great news for the many fans of the crispy rice dish with vegetables, egg and choice of protein. It was one of the most popular dishes at the former restaurant and earned many high remarks from Yelp reviews at Chae Cafe.

I really enjoy the accessibility of Chae Cafe. Whereas the previous restaurant required reservations on the weekend and had a higher price point, everything on the cafe’s menu is under $15, with most of the items around $10.

In-house baked brioche bread is showcased on French toast and sandwiches like California Roll, which has imitation crab, coleslaw, avocado and cucumber, and the BELT (bacon, egg, lettuce, tomato) as well as its fried chicken.

The heaviest dish on the menu outside of DMZ packs a huge punch in a small package. The potato cakes feature small kimchi potato cakes topped with cheese and bacon cream sauce. Order it to share with someone because it sticks to your ribs. 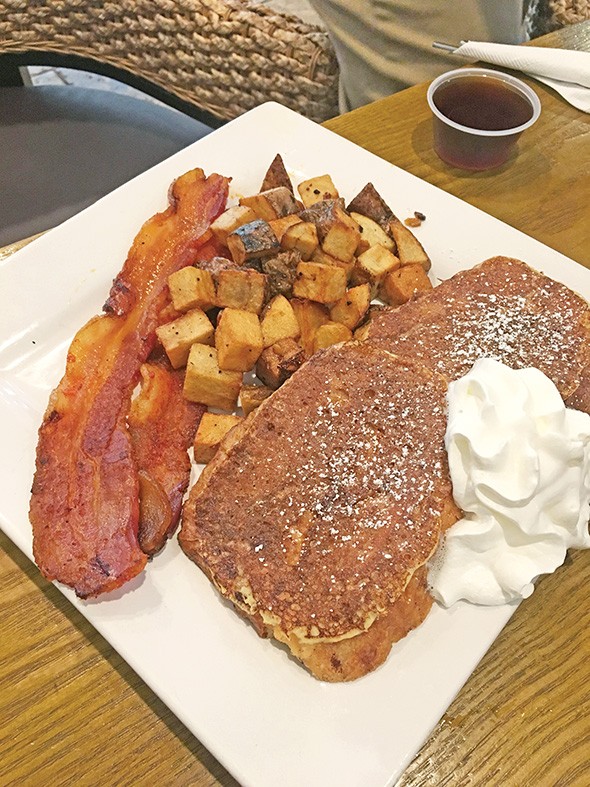 Chae Cafe’s version of poke takes the popular dish that is a mash-up of Japanese and Hawaiian flavors and adds a Korean twist. You can get marinated tuna or salmon, but Chae adds a twist by offering bulgogi (spicy marinated beef) or dakgalbi (spicy marinated chicken). The bowl of protein, rice and a healthy portion of vegetables is topped with Chae sauce, which is one of my favorites. The spicy and savory chili paste gochujang is mixed with other ingredients to temper the spice and bring out the savory aspects. It is one of my favorite interpretations of poke in the city.

A pair of recent visits to Chae Cafe highlighted its strengths and a few inconsistencies. The short rib Benedict has been a home run from opening until now, and the Benedict is also available with ham, avocado, tofu or shrimp.

My wife ordered a chicken Caesar wrap, but it was delivered without chicken. Of course, they rectified the matter, but it seems like the folks behind the front counter have a lot on their plate. Not only are they taking orders, they are baristas and serve as expediters from the kitchen, adding sauces and sides to plates before bringing them to your table.

I ordered the waffles — at least that what it says on the menu. It says waffles plural, but I only received one waffle with fruit. Social media photos show the order with multiple waffles. I do not know if this is a recent change or the kitchen came up short; I definitely left that meal a little hungry.

A subsequent trip went much smoother. I tried a new item on the menu: ramen salad. It features chilled ramen on top of lettuce with three fried shrimp, edamame, cucumber, carrots, pickled onion, sweet peppers and avocado. It was a fun dish that was a perfect lunch and not too heavy. My only tip is to ask for a side of its sesame dressing. The noodles were dressed, but I felt it needed a little extra after mixing everything together.

I also tried the brioche French toast, which was solid but not as crispy as I would have liked. Between waffle(s?), French toast and pancakes, I recommend the pancakes.

The atmosphere is relaxed with plenty of students studying and families enjoying a casual meal.

There are trips to Chae Cafe that would lead me to rank it as one of my favorite casual, counter-service restaurants in the city and other trips that are a little inconsistent. Even at its most inconsistent, it is still a vast improvement from the food from All About Cha, and I look forward to being a regular customer at Chae Cafe.