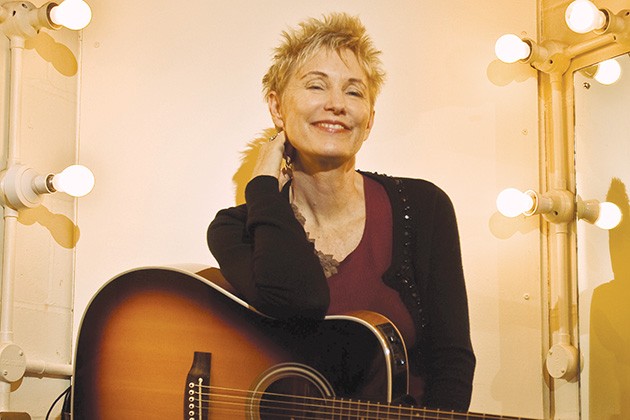 Eliza Gilkyson’s Secularia is the sound of her singing in full voice, something she once wanted to keep secret.

“Over the years, I’ve been sort of sneaking these spiritual questing kind of songs on my records,” Gilkyson said. “And I just thought, ‘Why not just come out and put them together as a collection and just see what happens?’ I’ve always been one of those people who’s looking for, What is that little thread of ministry that runs through everything? And how do you write about it without falling into religion or an ideology or new age or something? I just wanted to write about it without ever really naming what it was.”

Gilkyson — who plays 8 p.m. Aug. 21 at The Blue Door, 2805 N. McKinley Ave. with guitarist Jim Henry — said she has typically been more hesitant to explicitly explore the spiritual and existential themes she addresses directly on Secularia, released last year.

“I didn’t want to be labeled as some kind of a new-age person who had all the answers because, for me, it’s been more about asking the questions,” Gilkyson said. “The times that I thought I knew the answers, I was always resoundingly corrected by my life. So I think what I wanted to do is to come out as a person who was seeking the answers but never really landing on anything. Just the search itself, the questions alone, were enough of a journey.”

Fears of exploring the unknown and how others might perceive her searching have decreased with age.

“I’m at a point in my life where I’m not trying to posture myself or present myself in a certain light to try to court a market,” Gilkyson said. “I have more years behind me than I do ahead of me, and so I’m reflective. I think it’s partly just the stage of life that I’m in, but I do think right now, a lot of things are being done in the world in the name of religion. … I wanted to, in a way, reclaim the sense of wonder and the sense of mystery, the sense of gratitude. I wanted to reclaim it without having it fall under religious doctrine.”

“In the Name of the Lord” proclaims “We’re prisoners in a fairytale / A ship of fools all set to sail / We watch the Empire’s epic fail  / On shiny hand-held screens” and concludes “The lies we tell to fill the hole / Like coins dropped in a beggar’s bowl / They can’t redeem us when we go / Into the dimming day.”

Helping people confront reality and process the feelings that entails is one of art’s higher purposes, Gilkyson said, and an especially vital function now.

“In terms of what’s going on the world, I do think what’s happening is people are shutting down because they can’t handle it, and I do think that art does have a role there to maybe tap into a collective emotional field,” Gilkyson said. “It’s a way to sort of safely process emotions around things, and I’m very, very concerned that we don’t shut down right now because we have to care. We have to care about what’s happening to other people that are less fortunate than us. If we don’t care about them, if we don’t have the feeling of compassion or empathy or something, then I really do think we’re doomed. … I write so that I can keep myself open, and then I hope it’s tapping into something universal that will help others to feel safe enough to stay sentient.”

Organized religion does not have a monopoly on denying painful truths to the detriment of humanity, Gilkyson said.

“What disturbs me about the new-age movement is this sense of, ‘Everything’s going to be OK. All we have to do is love one another, and if we can just change our mindset to a loving, positive mindset, that will change the world.’ … There are systems and structures in place that keep people down, that keep people poor, that keep racial discrimination at the fore. … To just say, ‘Oh, if only those people could change their mindsets,’ that’s really dangerous because, in a way, that breeds complacency. It’s much more meditative, which is, I think, very healthy for one’s personal state of mind but doesn’t result in the action and real, thought-out productive plans we need to change systems of power that we’re living under.”

The album, produced by her son Cisco Ryder, features appearances by Shawn Colvin, Sam Butler, Tosca String Quartet and singer-songwriter and Woody Guthrie Folk Festival mainstay Jimmy LaFave, recorded shortly before his death in 2017. Lead track “Solitary Singer” was written by Gilkyson’s father and grandmother and served as the theme song for her father’s Armed Forces radio show in the 1950s. Gilkyson’s grandmother also shares writing credit for “Conservation,” a poem she wrote shortly before she died.

“I remember back then just thinking, ‘What a great poem,’” said Gilkyson, who set the poem to music. “It’s really burial instructions, and very pagan … for this woman in her 80s, it was pretty remarkable. And then we lost the poem. It disappeared. And when I was making the record, I remembered, somewhere back in there, that my grandmother written this poem … and I tried to find it, and I couldn’t find it anywhere. I didn’t have it; my dad was dead, and I had two old aunts, my dad’s younger sisters, both in their late 90s. I emailed them, and one of them went back through all her collection. She was a keeper of the poetry of her mother, and she found it about two months later and sent it to me. I was so excited. She died a few months later. It was really unfortunate. She never got to hear the song, but she did get that poem back to me. And I put a chorus on it and turned it into almost, like, an anti-gospel, non-Christian gospel song.”

After briefly describing ancient burial rituals, the song declares, “I have no god, no king or savior / No world beyond the setting sun / I’ll give my thanks for one more day here / And go to ground when my time has come.”

Though she describes her music as “rather contemplative and a little dark” with a “touch of apocalyptic,” Gilkyson said the atmosphere at her concerts is more like a revival than a funeral.

“Music is so joyful and in the moment, and my shows are so fun,” Gilkyson said. “They’re not dire at all. We laugh so hard at my shows. I tell stories, and I have a killer guitar player with me, so we just leap and land, and people do requests and we just go all over the place. The shows themselves are really fun and really spontaneous. I throw the contemplative stuff in, but it’s a journey, for sure.”