While the writers behind Jurassic World — the fourth installment in the Jurassic Park  franchise — were busy dreaming up new and creative ways to thrill audiences, paleontologists with the Sam Noble Oklahoma Museum of Natural History (SNOMNH), 2401 Chautauqua Ave., in Norman have been building a display so the public can experience a real and completely new dinosaur.

Although the fossil is a skull the size of a lemon, this diminutive creature has big implications for what we know about the horned-face dinosaurs called ceratopsia. The better-known members of this family include Triceratops and Pentaceratops. SNOMNH has one of the largest examples of Pentaceratops on permanent display.

The new specimen was formally named Aquilops americanus by Curator of Vertebrate Paleontology Richard Cifelli for SNOMNH, who, along with his team of researchers, discovered the fossil in the Cloverleaf formation outside of Billings, Montana. The name translates to American eagle face — Aqui is Latin for eagle, and ops is Greek for face.

The discovery has given us a better understanding of what we know of the beasts that once roamed the American West.

Cifelli led the team of paleontologists and researchers from Oklahoma and California. At the time of the discovery, the team had no idea they had unearthed anything remarkable, much less a fossil that changes our understanding of the ceratopsia lineage. The team that excavated the tiny, mostly intact skull was convinced it was the fossil of a small, plant-eating dinosaur that the Cloverleaf is rich with.

“It was a fist-sized piece of rock, and all we could see was a couple of teeth. We sent it back with Scott [Madsen, a paleontologist and fossil preparator] because it was a nice specimen,” Cifelli said. “It wasn’t until he’d had it a year or a year and a half  [that] it hit him with a force of a blinding ‘I know what that is!’”

Cifelli, who has worked with Madsen since the ’70s, explained that Madsen’s task as a preparator is meticulous and slow-going. Working with needles about the size of leather sewing needles, he removed about one to three grains of rock at a time to reveal the skull’s beak and a bone unique to ceratopsia called a rostral bone. These two characteristics distinguished it as a member of the same family that produced the giant Triceratops and Pentaceratops millions of years later.

American paleontologists have struggled with the lineage of horned dinosaurs, especially in North America, because of a lack of evidence in the fossil record. To be certain about the skull’s potential meaning in terms of the North American ceratopsia lineage, Cifelli called on Andrew Farke.

“[Farke] is not only a specialist on horned dinosaurs but has studied all the specimens in China,” Cifelli said.

China’s examples of fossil ceratopsia are far more complete. In some cases, they predate North American’s varieties by a few million years.

“[Paleontologists] all pretty much agree the group originated in Asia because the oldest and most primitive forms are there,” Cifelli said.

Aquilops’ age is the most compelling evidence that members of the horned-face family migrated to North America several times over the course of millions of years rather than in one single migration, most likely over the land bridge that once connected Alaska and Russia.

“There had been bits and pieces of the same era [as Aquilops] before, but nothing identifiable,” Cifelli said. “This [specimen] shows us that they are really basic, they don’t belong to the great groups we see later in North America.”

The fact that the skull is relatively intact is remarkable. Skulls are usually the first to crumble in the preservation process because of their hollow nature. For the first discovery of the dinosaur’s kind to be a skull is a rarity. This can also be problematic, as some characteristics in the skull appear to be juvenile, and juvenile remains sometimes exhibit characteristics that are not found in adults. When there’s only one, this can skew the evidence and the implications for a new species. Luckily, with Farke’s analytical help, the group was comfortable with the skull being an older juvenile. 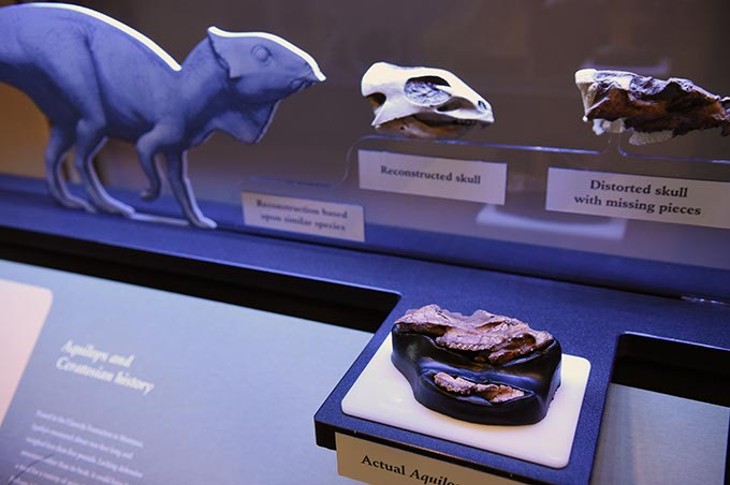 The team’s findings were first published in PLOS ONE, an open-access, peer-reviewed publication of research, resources and materials that is free to academics and the public. Farke and Cifelli, along with two others, published A Ceratopsian Dinosaur from the Lower Cretaceous of Western North America, and the Biogeography of Neoceratopsia in 2014. The article immediately gained attention in academic circles and popular science publications including National Geographic and Discover.

The fossil has captured academic and public imaginations alike, especially those interested in evolution. How could something develop from such a small creature to one of the largest dinosaurs to roam the continent? The contrast is especially striking when viewed at the museum. The Hall of Ancient Life, where the specimen is on display, is arranged chronologically. The museum staff highlighted Aquilops’ time period as well as its contrast in size to its formidable relative, Pentaceratops.

“It actually goes with the community where the raptors are in space and time, but it actually is a relative of the Pentaceratops. We’re going to stick this thing right in between, at opposite extremes,” Cifelli said. “So you have this teeny, tiny primitive one, which has got a beak but no frills to speak of, and then this kick-ass, gigantic descendant.”

The visitors will see three versions of the skull on display: the actual skull, a cast of the skull with restoration and repair and a 3-D, interactive model. The skull is part of the museum’s permanent collection and is now on display in the vertebrate paleontology collection.

Print headline: Eagle eyes,  is now on display at the Sam Noble Museum of Natural History.