Area mayors go all-in for a regional transit system; voters are next to get on board 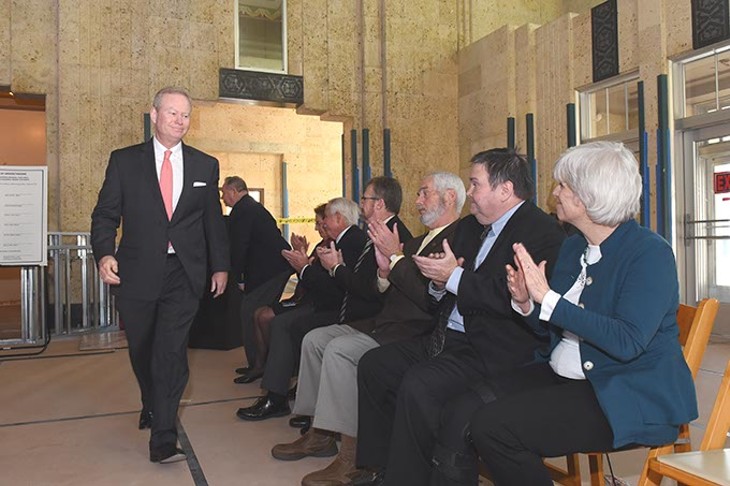 Formed to decide and select the future of regional mass transit for the Oklahoma City metro area, the task force’s work also centers on the project’s competition, which likely requires voter approval.

Elected officials and government leaders pledged their support over the past decade with backing studies calling for commuter rail, robust regional bus service and streetcar routes in the metro.

The Association of Central Oklahoma Governments (ACOG) will oversee the RTA, which will be comprised of representatives from all six cities.

“It has to be a strong investment with the individual citizens of central Oklahoma in mind,” Johnson told Oklahoma Gazette.

In many ways, past discussions revolved around the public. Elected officials refer to a regional mass transit system as a quality-of-life issue for residents of Oklahoma and Cleveland counties. Investing in public transit would fuel economic activity by attracting new businesses to the area and create new jobs. Additionally, alternative transit options cut pollution and improve air quality.

Once in place, a regional mass transit system’s impact would be visible on congested roadways, including Interstate 35. The area’s major interstate, which connects Edmond, OKC, Moore and Norman, is at capacity, said OKC Mayor Mick Cornett, who believes that’s a “wake-up call for the entire region.”

Alternative modes of transportation are vital but must be supported by the communities of central Oklahoma, Cornett said at the event, which featured mayors of Del City, Edmond, Midwest City, Moore and Norman.

“Ultimately, we want a system we can be proud of, a system that reflects the values of this community and brings thousands of jobs to central Oklahoma,” Cornett said at the Dec. 1 ceremony. “Today, we stand united with these goals in mind.”

How did we get here?

A decade ago, ACOG released the Regional Fixed Guideway Study, a plan for the future of transit in central Oklahoma. It called for commuter rail development, bus service improvements and placement of a streetcar system in downtown Oklahoma City.

It also paved the way for key transit discussions by area leaders and assisted with the downtown streetcar plan earning a spot among the eight projects of MAPS 3, which OKC voters approved in 2009.

That same year, the Regional Transit Dialogue began with government officials, the public and business and community leaders discussing future development of regional transit. Those conversations continued and bred the 18-month Commuter Corridors Study, called CentralOK!go, released in 2014. That study proposed a regional transit commuter rail system to connect Norman and Edmond with downtown OKC. Additionally, streetcars would take passengers from downtown to Midwest City and on to Tinker Air Force Base. Santa Fe Depot would serve as the regional transit hub. The station, utilized by Amtrak, is undergoing renovations via a combination of city and federal dollars.

The RTA is the next step in the Regional Transit Dialogue process, and Johnson said the task force’s first step involves reviewing the recent proposal.

“They can either follow that or determine something different,” he said.

“As we look at what’s happening around the country and where investment is going and where new growth and energy are going, it is in regions that work together,” Rosenthal said. “We have the opportunity to make central Oklahoma the most vibrant region in the country.”

How much will it cost?

The early December ceremony didn’t address mass transit system costs, though each of the city’s leaders committed $511,000 toward the RTA’s creation and federal funds add another $584,000.

While federal transportation grants are a possibility, the project needs taxpayer help. Johnson said recent legislation will help, as the RTA can draw tax boundaries by precincts closest to proposed rail lines.

Johnson foresees many questions from residents in those taxing boundaries.

“How is this going to improve my life? How will this impact my pocketbook? Is it useful for my lifestyle?” Johnson said. “If someone is going to come and tax me, what’s in it for me?”

A regional transit system is likely a decade away, but the decisions RTA makes over the next year will shape that system and the region’s future.

All six mayors pledged support for a regional transit system, but the last leader to voice favor shared the heart of the issue.

“Ultimately, voters will determine when they are ready to vote for it,” Cornett said.

"Print Headline"; Ride along, Area mayors go all-in for a regional transit system; voters are next to get on board.