Armed with compassion, locals are keeping watch over their immigrant neighbors

Promptly at noon, the voices of clergy, retirees and others concerned about a wide range of issues facing immigrants and refugees rang out the solemn verses of “We Shall Overcome” around the flagpole of an office building complex in northwest Oklahoma City on March 14. Prayer for immigrants, families, Dreamers, immigration officers and the national government followed the hymn. The Vigil for Immigration Justice was a 10-minute service; however, its impact goes much further than that.

The prayer vigils began in January, months after Mayflower Congressional United Church of Christ voted to join the New Sanctuary Movement, a national initiative to provide help to immigrants, including those undocumented, facing possible deportation. The weekly vigils bring together people from different congregations and faiths to pray for immigration justice and give attention to the plight of neighbors living without papers, said Rev. Lori Walke, Mayflower’s associate minister.

“I knew in theory that people were afraid,” said Walke in an interview with Oklahoma Gazette.

Mayflower’s congregation has spent the last year learning more about issues related to immigration — more specifically, how changes under the Trump administration affect the local immigrant communities, she said.

“I think that has been the real difference between a year ago and now. It’s no longer an issue,” Walke said. “These are people who are our neighbors, our friends and our co-workers.”

The prayer vigils show a commitment of support from members of the faith community to immigrants outside an unmarked U.S. Immigration and Customs Enforcement (ICE) office. The location was brought to the attention of Mayflower members after hearing of immigrant friends being asked to report to the NW 56th Street address by ICE. There are no signage or identification markers to confirm ICE’s presence in the large complex. After the first vigil, Mayflower leaders received their own confirmation when an ICE officer arrived at the church, inquiring about a protest. Mayflower leaders insisted the vigil was a religious service where community members unite in prayer and follow the Gospel’s call to welcome strangers. 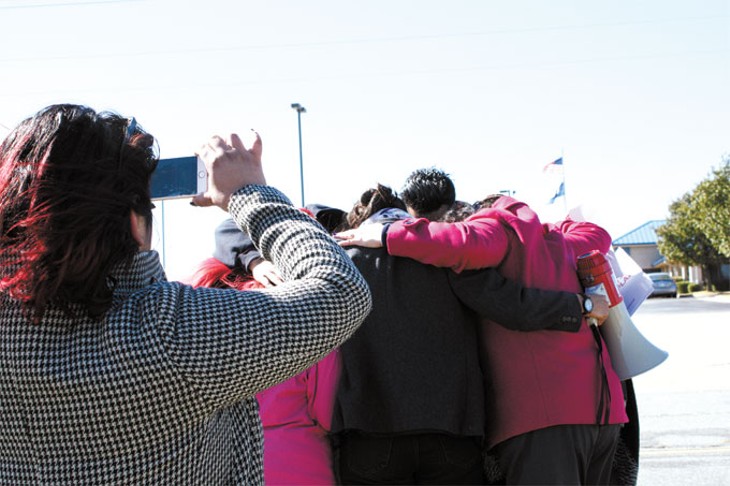 Days after taking office, President Donald J. Trump signed executive orders calling for tougher immigration policies and expanding the scope of deportation priorities to include those without a criminal record. Fourteen months later, the president has made significant progress in transforming the United States’ immigration system with a travel ban on eight mostly majority-Muslim countries, a reduction in refugee admissions, an uptick in immigration arrests and the termination of Deferred Action for Childhood Arrivals (DACA) and Temporary Protective Status (TPS) for nationals from El Salvador, Haiti and Nicaragua.

The changes have been felt in Oklahoma City’s immigrant communities, where everyone knows somebody who has heard of someone swept up in an ICE raid or where a routine traffic stop leads to ICE detainment. Locals’ reports of a heightened ICE presence have stoked fears.

“We are seeing practices that go not only against the norms of the last decade but beyond the memos and executive orders and against long-standing, court-defended laws and regulations of the United States,” Dream Act Oklahoma’s deportation defense director Serena Prammanasudh said.

Dream Act Oklahoma, a community-based organization, has chapters in OKC and Tulsa and aims to empower immigrant communities through education and advocacy.

“In addition to the traffic stop situations, people are being detained for complying with their check-ins with ICE, detained while they possess legal presence in the country due to a pending green card petition, and we have seen Oklahoma DACA recipients detained,” Prammanasudh said.

In 2017, ICE arrests went up across the board. The Dallas region, which includes north Texas and Oklahoma, made 16,520 arrests, which put it first out of the country’s 24 regions according to data released by the agency.

Immigrant communities are on high alert, especially after learning of the agency’s request to open a “forced detention and correction facility” at 1220 Sovereign Row in an industrial area of southwest OKC. ICE already offices in OKC at U.S. Citizen and Immigrant Services (USCIS), 4400 SW 44th St.

According to a City of Oklahoma City staff report, RP Oklahoma City, LLC applied for a special permit to operate administrative offices with a temporary daytime holding facility for ICE’s Office of Enforcement and Removal Operations. Oklahoma City Planning Commission had slated a hearing in early March; however, it was withdrawn from an agenda after it was discovered a special permit was not required.

Dream Act Oklahoma is “unapologetic and straightforward” on its stance on immigration enforcement, “whether it be more funding to hire additional officers, a wall, a detention facility or collaboration with ICE” as it “terrorizes families, especially children, and deeply harms communities, of which many members are historically marginalized peoples of color who continue to be disenfranchised and held back from contributing to society,” Prammanasudh said.

To fight against current deportation policies, Prammanasudh said, immigrants and their allies share their stories. Their voices are getting stronger with more individuals and groups reaching out to ask how they can help.

After hearing about the plight of a cancer-stricken 5-year-old — a U.S. citizen — whose mother was facing deportation, a small crowd congregated near OKC’s USCIS office to stand in solidarity with the mother and support her request for a stay of deportation. Walke, along with another clergy member and an attorney, accompanied the mother inside the office for her meeting with immigration officials on March 15.

Days later, Dream Act Oklahoma hosted its first Know Your Rights, Know Your Power clinic inside the Guatemalan government’s consulate in OKC. While the organization has hosted town halls and forums on the subject of immigrant rights, Prammanasudh said the clinics featured attorneys discussing how immigrants can exercise their constitutional rights in the event they come in contact with law enforcement.

Dream Act Oklahoma continues to explore innovative ways to help immigrant communities. There has been a discussion about hosting free vehicle inspections checking for working brake lights and signal devices. While the group pushes the MigraWatch Hotline, a national hotline for reporting ICE activity and raids, they’ve considered developing a local hotline that would send volunteers in real time to areas where ICE activity is reported.

“No human being is legal or illegal, and all human beings deserve justice and liberation,” Prammanasudh said. “When it feels like you have nothing else to lose, you risk it all. What stronger base can you have?”

Print headline: Citizens on ICE; In Oklahoma City, locals are keeping watch over their immigrant neighbors.