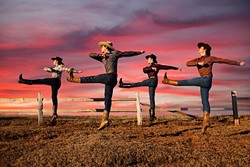 Ryan Malone, concert manager at Armstrong, said the collaboration started with conversations between the entities’ marketing directors. OKC Ballet is a resident of Civic Center Music Hall but performs elsewhere around the state outside its regular season.

Malone said while several ballet companies have taken the Armstrong stage in the past, the OKC company’s debut at the venue is long overdue.

“They’re an institution here almost a half-century old,” he said. “That’s really great to be associated with them and to have them perform what I call the quintessential cowboy ballet.”

Rodeo is perhaps most recognized for its grand and triumphant score by great American composer Aaron Copland. The music is most associated today with its use in the beef industry advertising campaign.

OKC Ballet debuted its production of Rodeo last year at the Civic Center in partnership with Oklahoma City Philharmonic. Robert Mills, the ballet’s artistic director, said all three of its previous performances were met with standing ovations from the crowd.

With dancers donning cowboy boots and other classic attire of the American West, Rodeo might be the perfect production for an Oklahoma-based ballet company.

“All of us, as Oklahomans, understand we’ve moved on from the old cow-town persona, but it is still a part of our heritage,” said Mills, who is originally from Chicago but has been artistic director of OKC Ballet the past nine years. “I think it’s important to acknowledge our history and where we’ve come from.”

The night’s performance of The Firebird features new choreography first developed by Mills for a production four years ago and has not been seen by audiences since.

OKC Ballet recently moved into a new facility at 6800 N. Classen Blvd. It opens its season Oct. 20 with Swan Lake, the first time it has performed the Pyotr Ilyich Tchaikovsky classic in four years.

Mills said OKC Ballet is excited both for its own coming season and for its debut in the auditorium, a smaller and more intimate setting than its regular Civic Center home.

“[The auditorium] is a beautiful theater to perform in, and it’s particularly nice for dance,” he said. “It has a large stage which allows the dancers to move freely and fully. It’s a smaller house, which can actually be good for noticing the intricacies of ballet.”

Armstrong’s season continues with a unique piano duet by Christopher O’Riley and Pablo Ziegler. O’Riley is the host of the child-prodigy-highlighting National Public Radio program From the Top. He pairs with Ziegler, an Argentinian composer and Latin Grammy winner known for his contributions to modern tango. The Armstrong Auditorium stop in their Two to Tango tour is scheduled for 7:30 p.m. Nov. 9.

Ray Chen, a 28-year-old Taiwanese-American violin virtuoso, performs 7:30 p.m. Nov. 28. Violinists are not usually known for their social media presence, but Chen has amassed a large following with more than 120,000 Facebook likes and 2 million followers on his Soundcloud account.

“He’s building a young fanbase, but he’s a classical violinist,” Malone said. “There’s no gimmick in the sense of what he’s doing. He certainly is breaking down barriers between classical music and popular culture, which I think it great.”

Béla Fleck, one of the world’s best-known banjo players, makes an Armstrong appearance Jan. 16 alongside string quartet Brooklyn Rider. Malone said this is likely the first time a banjo has been prominently featured in the performing arts series and certainly the first time in a classical or chamber context.

A regular favorite, Moscow Festival Ballet, returns for two shows Jan. 29-30. The Russian ballet company presents its Best of Russian Ballet Gala — a sort of “greatest hits” of Russian ballet including choreography from Marius Petipa, Michel Fokine and more — Jan. 29. It returns Jan. 30 for a presentation of Tchaikovsky’s ballet adaptation of Romeo and Juliet. The night will also feature a “best of” tribute to Tchaikovsky’s work.

Armstrong Auditorium has welcomed a Russian ballet company, either Moscow Festival Ballet or Russian National Ballet Theatre, every season since it opened its Edmond facility in 2010-11. Malone said the two dance companies are managed by a husband-wife duo and alternate U.S. tours each year.

“I feel like they’re the same family,” he said. “It might have a slightly different branding or terminology to it, but it’s basically the same Russian family that have been coming in since 2011.”

Dublin Irish Dance, a team of world-champion dancers with experience in Riverdance, Michael Flatley’s Lord of the Dance, and Celtic Woman, performs Feb. 20. Centuries-old German orchestra Staatskapelle Weimar makes a stop March 15 on its first North American tour. Glenn Miller Orchestra, the world’s most popular swing band, caps off the season with a performance May 10.

Malone struggles to put into words exactly what it is like to experience the eloquence of Armstrong Auditorium for the first time, though he said rookies are usually easy to spot.

The lobby features three gorgeous Swarovski crystal chandeliers that refract a literal rainbow of light throughout the interior.

“It’s not just like a bright light; it’s colorful lights just hanging above you,” he said. “The middle one is 12 feet in diameter, the other ones are 10 feet in diameter on either side — the reflection they create on the all-glass lobby windows, that just goes on and on and on. We see people come in, stop, stare. Their mouths are agape, and they’re just taking pictures of everything.”

Malone has been working with the Armstrong performing arts series since it began in 1998. He said awareness of the series has grown steadily each year with a large spike in interest following the 2010 opening of the auditorium.

Though an oil bust and general financial hardships have depressed arts attendance in the state, Malone said it is hard to say what, if any, effect an economic downturn had on Armstrong just because awareness of the series is still continuing to grow.

Armstrong’s mission is to champion Oklahoma as a world-class center for the performing arts, a mission it has stuck too since its inception.

“When we first started, it was very small,” Malone said. “It was just to create a cultural experience for concertgoers in the area — things we thought were culturally excellent but people don’t necessarily know about.”