Army of Frankenstiens release celebrated with screening, live riff at Will Rogers Theatre 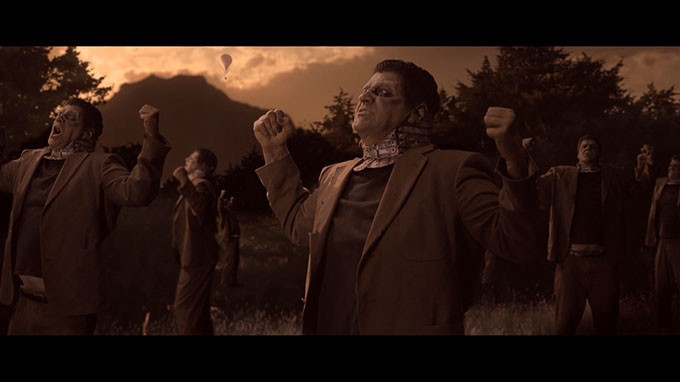 Several years ago, self-proclaimed movie nerd Ryan Bellgardt was listening to a director speak at deadCENTER Film Festival when inspiration struck him like a lightning bolt.

He wanted to make movies.

“After the deadCENTER realization, I started working with the equipment, working behind the camera,” he said. “The more comfortable I got, the more I thought, ‘I can do this.’”

In 2014, Bellgardt’s horror/sci-fi film, Army of Frankensteins, premiered at the festival.

He celebrates its digital, DVD and Blu-ray release with a special, comedy-infused riff screening 7 p.m. Tuesday at Will Rogers Theatre, 4322 N. Western Ave. Comedians Spencer Hicks, Lucas Ross, Joel Decker and Michael Corley join the film’s cast and crew as they lampoon the sci-fi/horror/comedy with freewheeling commentary in a style similar to RiffTrax and Mystery Science Theater 3000.

Bellgardt is creative director at Boiling Point Media and studied at the University of Central Oklahoma and American Broadcasting School. He even worked 10 years at KOMA with radio and television icon Danny Williams. By 2008, however, he and pal Lucas Ross created 2 Movie Guys, a locally produced blog, online comic series and weekly TV show for KAUT, Channel 43. Their 2 Movie Guys’ Intergalactic Holiday Showdown special, which aired on KFOR, won an Emmy in 2012.

But Bellgardt’s love of film and the science fiction genre goes back as far as he can remember.

“My dad was my earliest influence and my introduction to movies,” Bellgardt said. “He let me watch things he shouldn’t have when I was a kid: Halloween, Predator, Friday the 13th, things like that.”

Mainly, though, he loved to read. Isaac Asimov, Frank Herbert and Robert Heinlein, all writers from sci-fi’s golden age, were favorites.

These writers told stories that, once moved to a future context, allowed readers to confront modern issues without the tangle of current-day biases.

His move from imagination to writing, directing and producing a camp-filled horror/sci-fi movie was a natural one.

The flick tells the story of a youth (actor Jordan Farris of Choctaw) who travels back in time to find himself entrenched in the Civil War with a horde of Frankenstein’s monsters. It was filmed in Oklahoma.

Bellgardt said he came up with the concept as he talked with friends.

“We were talking about the scene from Twilight that has the army of vampires, and we noticed that nearly every popular monster had an army version: zombies, vampires, werewolves,” he said.

The idea of “green, lumbering Frankenstein monsters” took on a life of its own, so he wrote a film outline and then a script.

“I basically locked myself in a closet and wrote a screenplay in about a month,” he said. “My wife [Amy] and I got the funding going, and the company I worked for pitched in, too.”

Bellgardt admitted being afraid that choosing to be an independent filmmaker in a “less renowned” state like Oklahoma could land the project in its own world of escapist obscurity.

Then the teaser trailer changed everything.

During that time, he also created a Facebook page to chronicle every stage of his moviemaking process (facebook.com/AoFmovie). Sales and marketing agency Empress Road Pictures, which specializes in independent sci-fi and horror films, followed Bellgardt’s progress and reached out to him.

“Empress Road has been awesome,” Bellgardt said. “They got us picked up in China, the UK, Japan and Germany, in addition to the U.S. deal.”

Army of Frankensteins also was screened at 15 festivals and it earned Bellgardt a participant’s chair in a 2014 deadCENTER director’s talk.

He used that opportunity to thank everyone involved in the project.

“I think I said out loud, ‘Now that I’m here, I know it’s not just one guy. It took a hundred people to make that movie,’” Bellgardt said. “I’m so grateful for all the people that helped make it happen.”

Bellgardt acknowledged that good horror is difficult to create, but he’s ready to use his experience to make something even better.

“I’m going to do horror,” he said. “I enjoyed watching people laugh at Army of Frankensteins, but this time, I want to scare them.”

Army of Frankensteins provided enough revenue that Bellgardt already started financing his next project. He said he wants to fund as much as possible on his own and then seek investors beyond that.

In the meantime, he’s defining his own boundaries regarding the films he wants to make.

“The advice I get ... is to show the monster right away, but I want to go for psychological horror,” he said. “The root of good horror is putting ordinary people in extraordinary circumstances … a movie [with a] simple, scary premise, and it doesn’t rely on exotic locations, complicated sets or special effects.”