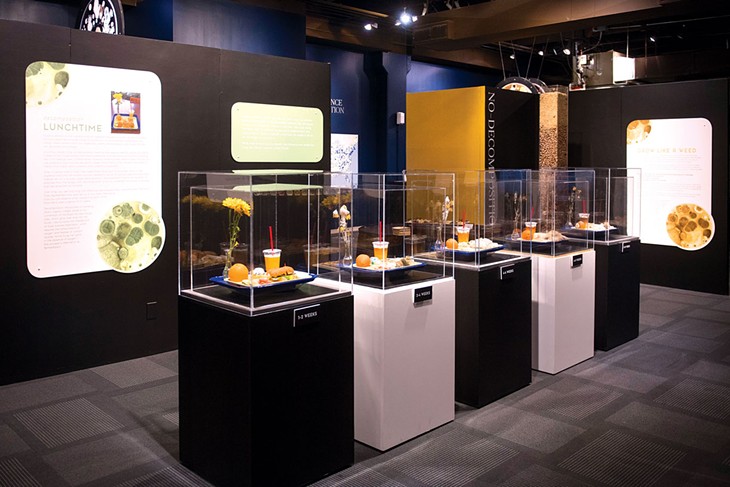 Successive lunch trays sit side by side in a row, nearly all of them overrun with mold, fungus and who knows what else. Most people prefer to consume their sandwiches, oranges, juice and other lunch treats before they can be devoured by nature itself, and even fewer would think to call their moldy meals art. But Science Museum Oklahoma believes the concept is one that will grow on its visitors.

Each of the trays sits under glass displays that often fog up with humidity thanks to moisture released from the fungal growths. The demonstration is one part of SMO’s smART Space gallery exhibition Decomposition: Discovering the Beauty and Magnificence of Fungi. The exhibit opened in late December and will remain at SMO through Aug. 12.

Art galleries have been a part of SMO since it began, but the space was rebranded smART Space in 2015. The intended purpose of the dual gallery showrooms — one short and one extended rotation — is to highlight the many ways in which science intersects with art and to make some science concepts more relatable to the museum’s young audience.

The Decomposition trays are moved down the line to show how fungus progresses over time, with the last tray showing growth from as long as 10 weeks. Some unfortunate soul is tasked with putting in a new tray of identical food and mustering the courage to toss out the spindly bed of gray fuzz and goop that the last tray became.

Henderson acts as smART Space’s main curator. He might work for a science museum now, but he has curated exhibitions in art galleries in the past and is an active artist himself. SMO, which is an Allied Arts affiliate, is strongly informed by art perspectives. Vice president Clint Stone is also a community artist.

Stone likes exhibits like Decomposition because they provide opportunities for youth and all guests to make their own connections. Trays of moldy food can quickly turn into objects of marvel.

“At first, they’re like, ‘Ew! That’s so gross!’ But then you can say to them, ‘Imagine if the food you left on your plate never went anywhere,’” Stone said. “‘We would be living in piles and piles of garbage. That the world works this way, it’s pretty awesome.’”

Other than Decomposition, the smART Space galleries have hosted popular exhibitions like Sole Expression: The Art of the Shoe and iconic stop-motion models and movie art in Ray Harryhausen — Mythical Menagerie. Its newest exhibit, Into the Fold: The Art and Science of Origami, opens March 9 and runs through January 2019. Access to the galleries is included with museum admission.

Stone hopes the smART Space galleries are an additional way in which SMO encourages its guests to learn and be curious.

“You come in for one experience and you leave with inspiration you never even imagined,” he said.

Art and science are viewed by some as polar opposites — stodgy, by-the-rules lab-coat wearers versus loose, whimsical creators in paint-stained smocks. But in reality, the two disciplines have fewer differences than they do similarities.

Stone said it is natural for a science museum to dedicate space to art.

“In some ways, I think it would be harder to explain the opposite,” he said. “With art, we’re always looking for creativity and problem solving. With science, we’re looking for the same thing: understanding how something works so that we can innovate and create something new.”

Science and art are so ubiquitous in life that of course the realms overlap. Everything everywhere has a scientific function or explanation, Stone said. Similarly, who can say what is and is not art? If a painting or sculpture can be art, why not a tree or a fungus? Especially when art takes so many cues from nature.

Many of history’s greatest artists also rank among the greats of science, and vice versa. For example, Leonardo da Vinci’s “Vitruvian Man” is cherished in both worlds. His contributions to mathematics and engineering are as valuable as his work on “The Last Supper” or “Mona Lisa.”

“Most scientists are artists, and most artists are scientists,” Henderson said.

Stone said he often merges the realms of science and art in his work. Recently, he has been using the biological and neurological ideas that people perceive colors differently from each other.

“Often when I’m working, I’m pushing those boundaries of candy-coated poppy and garish,” he said.

While science and art often overlap, they are not the same. Stone said they should be viewed as complementary forces. Their incessant push and pull constantly drives the culture further.

“The artist is good at connecting things,” Stone said, “while the scientist is going to want to understand those connections.”

There are many possibilities for shows that could come through SMO’s smART Space galleries, but Henderson said curating the child-friendly museum’s second-floor galleries is a lot different from bringing an installation to a fine art gallery.

“You have to think hard and build exhibits that are tough and can withstand all the touching, because they will get touched,” he said.

Henderson was in the process of installing Into the Fold while speaking with Oklahoma Gazette. In addition to showcased works from several origami artists, the exhibition includes interactive displays and tutorials that explain different kinds of folds.

Install time varies by exhibit but usually takes about two weeks. A lot of the work usually goes toward recovering a space from the exhibit that previously inhabited it.

“The hard part is when you take out an exhibit, there’s a lot of repair work that needs to be done,” Henderson said. “The planning is there, and you kind of know where everything is going to go. You just have to get everything to looking good.”

Henderson likes exhibits that introduce concepts but do not do a lot of the thinking for the viewer. When a guest checks out Decomposition, he wants them to come across revelations about the complex structure of fungi on their own. The museum’s job is just to nudge them in the right direction.

“I want to lead to that discovery,” he said. “Not explain everything, but hopefully they go home and try to figure it out. To learn from mistakes is how you have the ability to grow.”

The smART Space galleries — much like the rest of SMO — are all about opening doors to new ways of thought. What might start as a simple love for the art of folded paper has the potential to morph into something much more complex.

“It’s just creating that spark,” Henderson said. “You never know who will be the next physicist through their love of origami.”