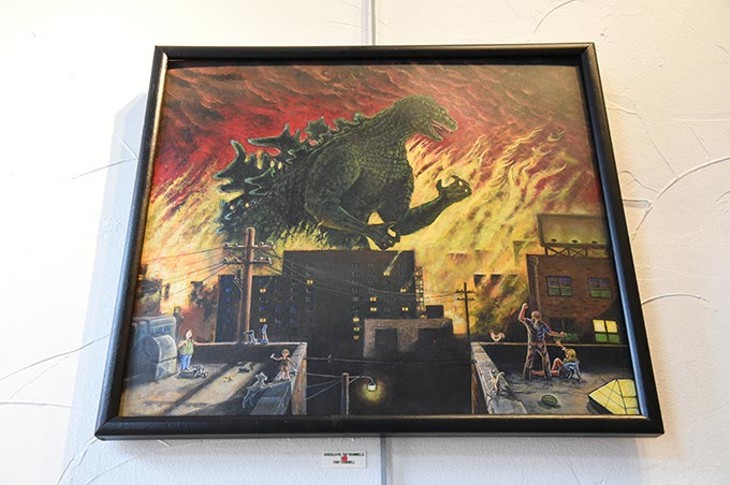 Oklahoma City is experiencing an art boom, and 2015 is shaping up to be a banner year for the local art community. From Tall Hill Creative’s planned art and music festival in March called Everything Is Not OK to Kasum Contemporary Fine Art’s upcoming exhibit of street artist Jeannette Herrera’s (aka Blue Face Killer) work, art followers have much to look forward to in the first quarter of 2015.

“We try to have the artists have some kind of concept,” Pauley said. “[Adams and I] both come from graphic design backgrounds, so we want our exhibits to flow and be consistent.”

“This place kind of serves as a launching pad in that aspect, because someone can come in here who has never had a giant wall to legally paint on to take their time with,” Adams said. “Artists can come in here and take their time and try things, and until the show, the doors are pretty much closed, so you don’t have to be worried about doing a bad job.”

Tall Hill is hosting a three-day music and art festival March 13-15. It will include more than 30 artists and dozens of bands.

“It’s my brainchild,” Adams said. “I’ve been involved in DIY punk actively for 20 years, playing in bands and doing art for them. A lot of my visual art was spawned from my activity in punk.”

Tony Morton, CEO and director of Kasum Contemporary Fine Art, 1706 NW 16th St., has lived in the Plaza District with his wife for five years. In that time, he has had the opportunity to witness and help shape the nascent creativity boom in Oklahoma City.

“To me, we’ll be in a renaissance when people stop using words like ‘weird’ to describe what’s happening and start saying things like ‘evolved’ and progressive,” he said.

“I ran Paseo Originals for some time,” he said. “I had ambitions towards eventually opening a gallery, and when Kay and Roy came to me and told me they wanted to retire, it was a bit of a surprise.”

Morton wanted to make sure he’d be able to do the gallery justice, minus a lot of financial risk.

So he found a spot closer to home on the Plaza, in a building whose owners were willing to work with a first-year business. Then came the name change.

“It’s my father’s last name,” Morton said. “It’s the name I was born with. As homage to my father, on Father’s Day, I got to share with him the name of the business, and that was pretty fantastic.”

Kasum kept many of the artists the previous gallery represented, and Morton said he has already brought several new artists in for 2015.

“Stephen St. Claire came on with the gallery whenever I moved over here, and I recently brought in work from his wife, Joy St. Claire, who does some pretty amazing small works,” he said. “Natalia Ferber is going to be an artist we show in the beginning of the year. Natalia is originally from Uruguay. She’s living in London now. It’s a big deal for me because it’s my first foray into photography.”

Other artists include Thomas Bautista and Jeannette Herrera, a Peruvian street artist.

“I think [her work] is going to shake up the art scene here in Oklahoma City, or at least make people scratch their heads a little bit,” Morton said.

Herrera’s work currently has the distinction of being part of Cheech Marin’s museum art tour Chicanitas: Small Paintings from the Cheech Marin Collection. Her work will be on display at Kasum Contemporary in March.

For more information about current exhibits, as well as a full list of artists, visit kasumcontemporary.com.

New artists looking for a place to show their work always have a shot at Paseo Art Space, 3022 Paseo St., in the Paseo Arts District. An offshoot of Paseo Art Association, Art Space is a multimedia art gallery, and anyone with a body of work can apply to show there.

“We don’t specialize in anything,” Executive Director Amanda Bleakley said. “We’re a great venue for new artists that may be looking for a place to show their work. Sometimes it’s hard to break into the art scene, and here, you can rent the space, which is unique for most places.”

The Art Space charges $350 for members to rent the space, and then it takes a 10 percent commission of the artist’s sales. Artists have to submit their work to a committee of their peers for approval.

“You can submit your work digitally via our website and choose which month you’re interested in, and if we feel like it’s a good fit, you can rent the space for a month,” Bleakley said. “We have a committee of two or three people. They’re local artists, and they decide whether a work is appropriate or not.” 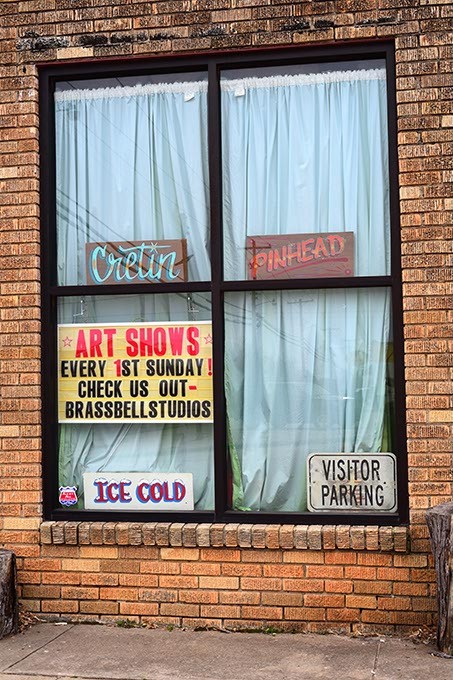 January’s guest artist is Sean Giboney from Tulsa. Giboney works mostly with abstract painting and portraiture. You can find out more about Art Space, including how to submit and when special gallery events are held, at thepaseo.org.

Since 2011, Brass Bell Studios, 2500 NW 33rd St., has showcased local art and provided a space for the studio’s co-owners, Ashley Smith and Tanner Frady, to work. They host art openings the first Sunday of every month from 5 to 9 p.m.

“BBS features local artists and is open to anyone wanting to participate in semi-annual group shows,” Smith said. “[It] also hosts a local Drink and Draw program every second Thursday of the month from 8 to 11 p.m.

During D&D, anyone is welcome to come and casually hang out, draw, doodle and/or communicate and network with other artists.”

Brass Bell’s next major event is Sunday, Feb. 1. It will feature Smith’s work as well as the work of Samantha Vigliaturo, Natalie Griffin and Jennifer FayLocke.

Find out more at facebook.com/BrassBellStudios.

Planet Dorshak — the home of Dorshak Bloch and Bombs Away Art Company, as well as the primary retailer of Literati Press comics and books — is planning a 2015 full of science fiction-tinged comic book art and other mixed media. According to studio owner Dustin Oswald — the artist and designer behind the pseudonymous Bloch — they will feature a different artist every other month.

“I’ll leave their stuff up for a couple of months,” Oswald said. “We had Tony Trammell’s stuff up in December as our featured artist, and I left his up for the new year.”

In March, Oswald will host the Marvel March Action Auction, a private showing featuring various artists’ takes of their favorite Marvel superhero or villain on 12x18-inch cradled birch panels. He will donate the proceeds from the show to the arts enrichment program at Cleveland Elementary School.

Tyler Wardlaw, an illustrative artist, will be the featured artist in April.

Later in the year, Planet Dorshak will have a book release party for Oswald’s second graphic novella, limited edition prints and t-shirts.

You can find out more about Dorshak’s upcoming events at facebook.com/planetdorshak.

print headline: OKC renaissance, There are many excellent art galleries to check out, and they have a lot planned for 2015.