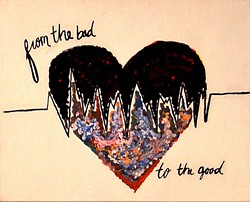 Paint on canvas tells tales of troubled young women. The words and images brushed and splattered onto the woven material vary as much as the colors from which they are composed. The works line the walls of Inasmuch Foundation Gallery at Oklahoma City Community College (OCCC).

Some of them speak of heartbreak, others of hope; in some, the two intertwine. They are all statements from women yearning for brighter futures, often with pained pasts.

The artists are 14 to 19 years old and receive gender-specific treatment at the Office of Juvenile Affairs’ (OJA) Secure Center in Norman. The unit is referred to as 4G, short for “For Girls.”

The grant-funded art program is a joint effort between the OJA and Girl Scouts Western Oklahoma (GSWO) to help patients develop coping and life skills and give them a voice. The partnership launched in 2008. Art was introduced into the program in 2014.

The theme of the show staged in the Inasmuch gallery is The Journey of a Survivor. The exhibit stopped at Mainsite Contemporary Art in Norman, the University of Oklahoma Anne and Henry Zarrow School of Social Work, Del City Library, Northwest Library and Ralph Ellison Library before its last showcase at OCCC, 7777 S. May Ave.

Though the setting is unconventional, the young women are a full-fledged Girl Scout troop, complete with a troop number.

“They have their uniform sash. They earn badges and patches just like they would in a traditional Girl Scout troop,” said Katelyn Gleason-Dockery, GSWO community programs specialist and 4G Girl Scout troop leader.

An instructor taught the scouts basic technique during the program’s first session.

For many, it was their first experience with art and they were encouraged to experiment with multiple mediums. The goals are to help women develop positive stress-coping mechanisms and express themselves.

“Each girl has her own canvas, so she really gets to make the decision on what she wants hers to be about and how to tell her story,” Gleason-Dockery said. “This is their voice for the world right now. … This is their way to get their story out.”

Often, those receiving treatment at 4G emerge from backgrounds marked with instability. As with any art, emotion inspires painting and drawing, which tends to spill onto the canvas.

“The girls are typically from poverty areas and also girls who have encountered abuse, neglect — all those type of things,” Gleason-Dockery said. “A lot of the girls share that in their artwork … when you get to see their canvases and wall scripts, you get to hear the story of what they have been through and some of the special problems that they face.”

One such student is 18-year-old Symone Henson. In treatment since age 15 for first-degree robbery, she arrived from an unstable home from which she was removed when she was 14 years old. She is now in her second year with the Girl Scout troop.

“I was thinking about how I grew up and the environment I came from,” said Henson, speaking of her art’s inspiration. “When I was first locked up, I viewed it as ‘This is horrible.’ I didn’t want to be there. But then, as I got older, I viewed it as a second chance because if I had been 18 at the time I did it, I could be in prison already.”

Her work features the sun, a tree and a horizon. Above the horizon, near an orange-and-black orb, the words “regret,” “pain” and “hurt,” among others, describe her early days at 4G. Below the horizon, near the tree, are “hope,” “courage” and “dream.” The words reflect her new outlook on life.

“When I get out of this program, I’m going to go take GED classes and get my GED,” Henson said. “Then I’m going to go to Mid-America [Christian University] to get my LPN license to become a nurse.”

The art often inspires those who view it, many of whom share their gratitude with the artists.

“We’ve also had people write letters and send them to me just expressing what the artwork meant to them,” Gleason-Dockery said. “That way, they know the effect it is making and how it is inspiring people and people are moved by it.”

The theme for another 2016 show will be Even Stars Cannot Shine Without Darkness. GSWO hopes to revisit many of the galleries with a final showcase at OCCC.

Gleason-Dockery said the public display of the works inspires viewers and artists.

“Whenever it is displayed somewhere, I take a picture and bring it into the building to show the girls, ‘This is what your artwork looks like hanging in this gallery,’” she said. “You can tell it really excites them; they feel really accomplished.”

The Journey of a Survivor is on display in Inasmuch Foundation Gallery at OCCC through Aug. 12.

The Journey of a Survivor