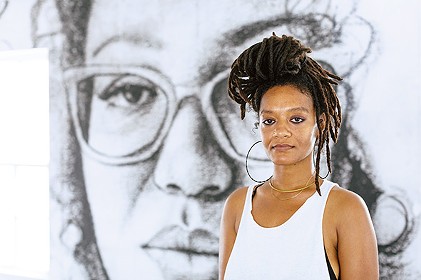 To view Tatyana Fazlalizadeh’s art is to be confronted. Intense gazes stare out from her oil paintings or wheatpaste posters, asserting space not only on a canvas or wall, but within the world, proclaiming their existence despite the hostility that might be directed at them.

She has described the Oklahoma Is Black exhibition as a love letter to Oklahoma City’s black communities, with a particular focus on the city’s northeast side, where she grew up. She visited with many individuals about their experiences and will incorporate these interviews as videos and quotes alongside her art.

“I’m just trying to express an existence here, a culture, a history and a very gentle sweetness that is my perception of black life in Oklahoma,” Fazlalizadeh said.

Fazlalizadeh recognized that Oklahoma’s black history is rich and the communities are diverse. The show is meant to amplify black voices and celebrate the lives of black Oklahoma City residents.

“This show isn’t necessarily just about race, not just about racism or sexism or these things,” she said. “It’s about what these different black people in Oklahoma, based on who they are and their different identities, have experienced as [Oklahomans].”

Ten days before the exhibition’s opening, the large space was still a blank canvas awaiting Fazlalizadeh’s work. She walked the room in preparation with Jennifer Scanlan, Oklahoma Contemporary’s curatorial and exhibitions director.

The exhibition is site-specific, meaning Fazlalizadeh is creating the artwork exclusively for the Oklahoma Contemporary space. That also means that this is the only time visitors will be able to experience this particular work.

Fazlalizadeh and Scanlan have been speaking for over a year about setting an exhibition in Oklahoma, and in that time, Fazlalizadeh’s ideas evolved as she considered what conversations she wanted to have with Oklahomans.

Fazlalizadeh said she wants black visitors to see themselves in the work and feel like they were heard. She acknowledged the complexity of black opinions and experiences and would like visitors to be confronted with that, as well.

“I just want this work to be very honest and very truthful,” she said. “And I think that’s the challenge that I’ve been working to come over. How do I make this as truthful and honest as I possibly can while understanding that I can only say so much or show so much or do so much?”

In a phone interview, Scanlan agreed that black communities don’t often see themselves and their neighbors represented in artistic spaces and said she hopes Fazlalizadeh’s work gives visitors a “better, richer understanding of what Oklahoma and Oklahoma City is.”

Scanlan expressed excitement for Fazlalizadeh’s work and the importance of having her return to her home state.

“She’s very much an artist who is ready to take the next step and really emerge, in addition to the street art that she’s done, with the installation work and oil paintings that have become an important part of her practice,” Scanlan said.

Fazlalizadeh opened an installation last year at Project Row Houses in Houston called The Personal as Political, which integrated portraits, quotes and video. She is pushing those concepts further in Oklahoma Is Black by including videos of her interviews as well as a separate video installation.

Fazlalizadeh said incorporating her subjects’ voices is an important component in making the artwork useful, especially to those who suffer oppression.

“Art can have an effect on their lives in that way,” she said, “an effect on changing how they are treated, an effect on how they are able to express themselves and navigate the world for themselves when they feel like they have a voice in another medium. And I’m just offering my medium as a space for that voice to be heard.”

Fazlalizadeh has seen a great deal of increased exposure in recent years. In 2015, she was featured on Forbes’ 30 Under 30 list. In 2018, she was named the NYC Commission on Human Rights’ first Public Artist in Residence (PAIR). She also provided artwork and inspiration for Spike Lee’s Netflix reboot of She’s Gotta Have It in 2017.

A lot of this attention sprang from a project Fazlalizadeh began in 2012, a street art series titled Stop Telling Women to Smile.

She said she wanted to provide a way for victims of street harassment to speak out through her pieces. The ongoing project began with portraits of women on wheatpaste posters with declarations underneath their steady gazes. “I am not here for you,” one says. Another reads, “Women do not owe you their time or conversation.”

Fazlalizadeh has experienced street harassment throughout her life, including when she was working outdoors as a muralist in Philadelphia. These incidents inspired the project.

Like much of her art, the Stop Telling Women to Smile pieces are works of activism she hopes will challenge viewers and change behavior. She said the art fits best on the street, where the harassment usually happens.

“That work, it really does work as this comfort for women,” she said. “You walk down the street, you come across this piece and you feel like someone is there in solidarity with you or speaking up for you or giving you a voice.”

One notable aspect of Stop Telling Women to Smile is the diversity of the women featured in the artwork. Women of color are predominant subjects, which is an intentional choice Fazlalizadeh made to expand the narrative of street harassment victims.

“I wanted to not just include black and brown women, but to prioritize them,” she said. “Because, yes, we get a lot more harassment in more extreme ways, a lot more violent harassment. So [I was] trying to think about who was the most vulnerable among us, including trans women, queer women.”

Fazlalizadeh is also currently writing a book about Stop Telling Women to Smile.

Oklahoma Is Black will be Oklahoma Contemporary’s final exhibition in its current location. Construction is underway at the art center’s new location at NW 11th Street and Broadway Avenue, which should open in the fall.