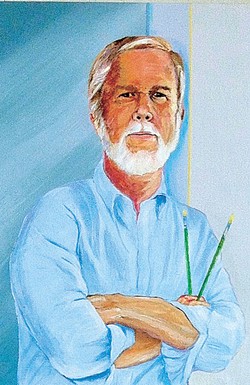 Retirement can be a good time for reflection and, sometimes, rebirth. The newest exhibit by Shawnee-based painter and recent Oklahoma Baptist University retiree Steve Hicks can be called an example of both.

Hicks taught art at OBU for 36 years before retiring early last year. His latest exhibit, As I See It, which has been open at Norman’s The Depot since Jan. 12, is one-half works from the last two decades of his career and one-half new pieces made within the last year.

The artist will be present during a free special reception 6-9 p.m. Feb. 9 at the former train station and exhibition space, 200 S. Jones Ave., in Norman. The reception coincides with the monthly 2nd Friday Norman Art Walk. As I See It remains on display at The Depot through Feb. 25.

Hicks said the exhibit is like a visual diary of his art career since the late 1990s.

“I went back and picked up some earlier things just to give people an idea of the range of my work,” he said.

His works are varied and range from abstracted versions of Oklahoma’s flat landscape to still lifes and even humorous parodies. A few pieces from Hicks’ series of Vincent van Gogh self-portrait spoofs are included in As I See It. “Bass Pro van Gogh” features the 19th-century post-impressionist wearing a Bass Pro Shops baseball cap. “Afro van Gogh” shows the artist with a Bob Ross bouffant.

Van Gogh had a particular fondness for self-portraits, painting more than 30 over the course of his short career.

Hicks said there are not a lot of deep hidden meanings within the parody series. Sometimes art can exist to merely make us laugh.

“[Van Gogh] was not one of my favorite painters or anything,” he said. “It’s just one of those things that sort of took off.”

The idea for the series stems from an elaborate inside joke within the family. Hicks was known for driving around an old van, and his children — who include daughter Erin and local comedian and OKC Comedy co-founder Spencer Hicks — would joke that he should get a custom license plate that read “VAN GO” or something close to it.

One day, Hicks actually went to check the availability of such a plate at a local tag agency but found that pretty much every variation of “VAN GO” was taken.

Even after his failed attempt, Hicks’ association with van Gogh did not end among his children. One day, Spencer joked that his dad should paint Vincent van Gogh as a tennis pro, spawning several other van Gogh rhyme spoofs.

Hicks did not think the joke suggestions sounded like such a bad idea. He painted several examples and has steadily added to the series over the years.

As Hicks was going through his collection of work to select which pieces to include in As I See It, he was struck by his progression through the years, both in style and subject.

“Although some of the pictures have a similarity to them, you can kind of see differences in them,” he said.

Steady progression has been a constant for Hicks, both in his art and his life. 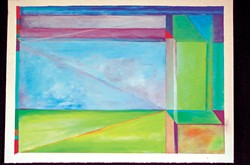 Though Hicks and his wife Cindy have now lived in Oklahoma for longer than they have lived anywhere else, both were born and raised in Kentucky.

Hicks said he has been drawing for as long as he can remember.

“My mom used to tell me that was the only way they could keep me quiet — with pencils,” he said.

In middle school and high school, Hicks would always get recruited to make posters for the various student groups and organizations. Art seems to have always been part of his reputation.

“I’ve always been fascinated with color and shape and paint application and how that affects people,” he said. “It’s always been a part of me.”

Hicks first enrolled in University of Kentucky as a history major but eventually switched his course of study.

“I realized soon that art is a lot more interesting to me,” he said.

After graduating with his art degree, Hicks was drafted into the U.S. Navy and did a tour of service in Vietnam. He spent many days and nights aboard an aircraft carrier, looking out at a blue horizon that seemingly stretched on forever. In a way, the sight contributed to his later fascination with painting Oklahoma’s skyline.

“It was kind of an interesting experience,” he said. “That might have something to do with those landscapes being so flat, because out at sea, that’s pretty flat, too.”

After completing his tour of duty, Hicks went on to earn a master’s degree in studio arts from Kentucky’s Murray State University. He then migrated west to earn his master of fine arts degree at University of Arkansas.

Hicks taught at schools in Arkansas and Louisiana before eventually getting a job offer at OBU. He liked the idea of working for a liberal arts school with a good reputation, and while he always thought he’d eventually move on to a larger university, his relative comfort kept him in Shawnee for more than 30 years.

“It’s been enjoyable,” he said. “I have no complaints.”

When he was earning his art degrees in college, Hicks did not picture himself as a career professor. But as graduation approached, one has to find a way to make a living. Several of Hicks’ instructors recommended teaching as a way for an artist to make money.

Teaching did take Hicks away from his own art a lot, but he does not regret the profession. Working with and assisting students was often invigorating.

“They have a fresher, younger perspective on things,” he said. “There’s a nice give-and-take with that.”

Hicks is proud of the fact that many of the students in OBU’s art program have gone on to get art-related careers. He said teaching was often as much a learning experience for him as it was for his students.

“I was never afraid to tell them, ‘I don’t know,’ if there was ever a situation that came up where I didn’t have any suggestions,” he said. “And sometimes they had comments and points about my work that I had to stop and consider and figure out.” 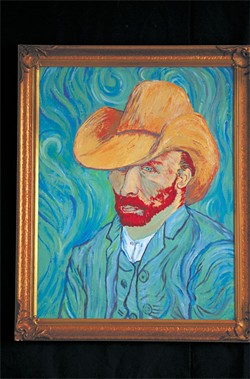 Hicks enjoys having more time to paint and work on his own art now that he is one year into retirement. Still, life isn’t all free time. Hicks has several grandkids, including Spencer’s children. Hicks and his wife spend a lot of their time acting as babysitters.

While his van Gogh series suggests a knack for humor, Hicks was not sure if he could take all the credit for his comedian son’s talent.

“I don’t know if I can claim all of that,” he said, laughing. “I think his mother has something to do with that, too.”

Hicks said the thing he enjoys most about retirement is the ability to focus all his time and energy on one particular project. There are no classes to lead, no papers to grade, no committee meetings to sit through — just one man and his canvas.

“It’s nice not to have those distractions,” he said.

As I See It reception

Note: The exhibit runs through Feb. 25.