Artist Christie Owen's work grew from a means of self-therapy 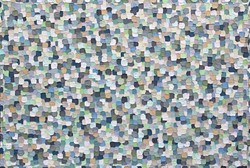 Five years ago, after spending most of her adult life working in graphic design, Christie Owen began to seriously devote her energy toward sculpture and painting, beginning with animal subjects and then moving into abstract work.

Owen brought her art to prominent shows like Oklahoma Visual Arts Coalition’s 12x12 Art Fundraiser, and her large-scale paintings were progressing nicely until a family health concern shifted her attention in a new and fascinating direction.

“About 2013, my brother had surgery and it was really scary,” said Owen, whose current show, Surroundings, is on display through Jan. 7 at Oklahoma Hall of Fame at Gaylord-Pickens Museum, 1400 Classen Drive. “I just had to get out of the hospital, and so I went down to my studio and I was just looking at the supplies that I had and I wanted to do something calm — not necessarily something expressive or action-oriented like I’d been doing, you know? This was just a calm way of just focusing.”

What transpired was the product of self-therapy. Owen grabbed a palette knife and applied a dab of acrylic paint and modeling paste to her canvas, and then another and another, building a mesmerizing grid of varying colors. She worked on the first one for three weeks, never knowing if it would amount to anything that would impact the art market.

“It was like a puzzle, like a game that I could build layers on,” she said. “It was completely different for me, but it was good, because I really needed to be present and focus on just one thing.”

Her first sale at auction confirmed that there was a market for her “Sugar Mountain” and “All in All” series, and after posting the works to her website, she received a commission. Then she was invited to show her work at ArtNow, Oklahoma Contemporary Art Center’s annual sale and benefit.

She went big, and her painting sold.

While Owen’s work includes functional art, sculptures and furniture, the “Sugar Mountain” and “All in All” series are her calling card at this point. Each of the large-scale paintings takes between 100 and 120 hours to create — Owen actually logs her hours using the TimeTracker app — and require a great deal of discipline to complete.

“That kind of work involves intention, as opposed to working in a kind of experimental, free way,” she said. “This definitely has parameters and boundaries. It’s almost like a game, and I’m the game master.”

So far, she’s winning. A “Sugar Mountain” painting measures 5 by 14 feet, and the work is building a similarly massive following. The sixth and seventh paintings in the serious sold at this year’s ArtNow event, and while Owen continues to work in other media, these distinctive pieces are resonating. While she said that there’s always the possibility that someone else is working in a parallel vein, her paintings came from a personal place: a stress-reduction strategy that resulted in artistic success.

“At the end of the day, if somebody’s making something similar, it’s still my mark, my fingerprint, my style,” she said.

Editor's note: The online version of this story was updated Nov. 22, 2016 to correct a typo in the story cutline that misidentified the venue.