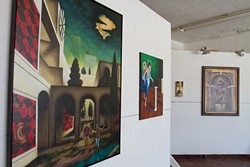 Dayton Clark began thinking about art as a career choice back in high school. But he wasn’t interested in painting landscapes or bowls of fruit. Instead, he chose to create art that toys with the neoclassical style, provokes the viewer to question his or her belief system and illustrates how the artist confronts death.

Clark’s exhibit, A Surreal Embrace of Absurdity and the Confrontation of Death, runs through Friday at Dope Chapel, 115 S. Crawford Ave., in Norman.

He said he hopes people who come to see his work will see the passages in his art where he really found his joy. The paintings are a reimagined neoclassical style with contemporary symbols that showcase the artist’s talent for juxtaposition and playing with modern society’s mythological entities.

“I hope they will pay attention to the intricate details,” he said. “If they can just stand in front of a piece for five minutes and take it all in, I think they will appreciate what it says to them.”

In Clark’s experience, older audiences aren’t as receptive as his peers.

“[Older audiences] tend to have many questions about what is going on, and I try to answer them as honestly as I can and explain what I was thinking,” he said.

Clark’s work, he said, resonates well with his peers, but despite the differing opinions, he is excited for everyone to check out his art and give feedback.

“I am excited about developing a relationship with my own audience, specifically that of the architect and the explorer,” he said.

When it comes to inspiration, Clark said he doesn’t really know where it comes from, but he keeps cranking out work and hopes something clicks.

One piece in his Dope Chapel exhibit came out of some insecurity he was dealing with, and it turned out to be one of his favorite pieces.

“I wish I knew what the common denominator was because I would be a better artist and would be coming up with more new pieces all the time,” Clark said. “In the near future, I hope to build up a good body of work, using tools I learned at [the University of Oklahoma].”

Clark has always drawn and enjoyed art as a pastime, but it was more than a hobby for him. He said it was an identifier, that it set him apart from the crowd.

“Toward the end of high school, when people begin thinking about what they want to do with their lives, that’s when I decided to follow my passion and study and pursue art,” he said.

Clark’s style evolved from what he calls a “gaming background” and reflects the mental architecture of an introverted intellectual. He grew up in Ada and Shawnee before relocating to Norman in 2007.

Last spring, he graduated from OU, and he’s continuing his education this summer by traveling to Italy. He will spend a month in Rome and Florence, using the experience to enhance his future as a budding artist.

“I was raised in the Catholic church, so seeing all those images at an early age led me to where I am today as an artist,” Clark said. “Initially, when I was younger, I was into fantasy art, but today, I have an interest in the Renaissance and Baroque style.”

A Surreal Embrace of Absurdity and the Confrontation of Death