Chances are you’ve seen Matt Goad’s work, even if you don’t realize it.

His whimsical, colorful style is distinctive and this year’s Keep It Local OK card features his art.

The card is exemplary of his work; the colors jump at you and the subject matter is one of Oklahoma’s beloved icons: the buffalo.

His varied portfolio includes album covers, public murals and private commissions. He was a member of Starlight Mints (he is currently in the band The Feel Spectres) and designed most of the Starlight Mints artwork, which illustrates Goad’s use of primary color and clean lines. In work like that, his design background is evident.

He’s called a modern abstractionist and a pop surrealist, but he's not especially hung up on labels. He doesn't care what you call it; he just wants you to see it.

Artist/designers like Charley Harper and Jim Flora are among his early influences. Harper is best known for bright, line-based portraits of wildlife. Flora made eye-popping covers for jazz and classical albums full of misshapen but discernible human and animal shapes. Goad’s work is fully his own, but both artists’ influence shine through.

“I’m lucky, in a way. I really wasn’t very good at anything other than art,” he said. “It was bleak looking at art careers, but I’ve been fortunate to have things fall into place and have fun doing what I do.”

His original plan was to study at Oklahoma Christian University, and while they had a great design program, he didn’t necessarily get along with the institution.

“I had long hair, and they kicked me out of school on the first day of enrollment. One of the reasons I didn’t get into computers is that class was full by the time I got a haircut,” he said.

It was an event that shaped both his process and his work.

His first job was with a now-defunct design firm in OKC. He got credit hours and pay, but it wasn’t even enough to cover the rent. He was, however, building a resume and getting valuable work experience.

The owner occasionally gave him freelance work like illustrating menus for local restaurants. He gradually figured out what he loved, and illustration topped the list.

Goad sometimes uses mid-century methods involving a drafting table, pencils and X-acto knives, tools that have been replaced by computers for most designers.

Goad got his degree in 1993 after spending two years at the University of Central Oklahoma, and he graduated with a respectable portfolio.

His first job after UCO was with Visual Imaging Marketing (now known as VI Marketing), a huge local design firm, where he continued to do things the conventional way.

He adapted to using computers, but he sees them as nothing more than another tool.

During his time at VI Marketing, he made photo-ready mock-ups with paper and tape. It’s also where he confirmed his love for advertising.

Goad’s personality shows in his work. He is completely comfortable with his life and art. His work is fun and is reflective of his mischievous nature. It makes a statement, one that you often miss on the first view. However, the exact statement it makes is up to the observer. 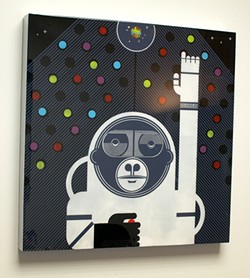 After years of building his craft and career, Goad is busier than ever. He works full-time as the creative director at Funnel Design Group.

The Keep It Local OK cards expose his art to a different demographic.

His goal is to get his art out to people who wouldn't normally see it, so he was excited when the people at Keep It Local OK approached him.

“Truthfully, I love my life, but I would love it to be bigger, to be on an international level,” he said.

The design on the Keep It Local card is on coffee mugs available at Shop Good, 3 NW Ninth St., for $15.

The thing he is most looking forward to is his shiny science fiction-themed show. Monkey Do opens Thursday, Jan. 29, with a reception from 5 to 7 p.m. in the Crystal Bridge Tropical Conservatory at Myriad Botanical Gardens. He will have new work on display as well as prints, T-shirts and whatever else he dreams up. What is certain is the show’s theme and timing are no accident. No matter what the future brings, Goad is ready for it.