Everywhere she goes, Holly Wilson searches the ground and pokes through underbrush in a quest for the oddly shaped branches and found objects that add dimension to her miniature, humanlike works of art.

She organizes them in drawers inside her Mustang studio, knowing it might take years before the right sculpture beckons them.

“I feel like a kid that didn’t grow up,” Wilson said. “You know how kids will pick up sticks and they’re like, ‘It’s a dragon’ or ‘It’s a gun’ or ‘It’s a bird’? I feel like I’m still doing that. I walk around constantly, picking things up and going, ‘I love the curve of this.’”

She expresses her connection with childhood in her life and work. In Wilson’s home, her 11-year-old son and 9-year-old daughter stage action figures throughout the house as they create elaborate narratives about armies and civilizations. Wilson constantly works on her art and alternates studio time with family time and renovating their home. 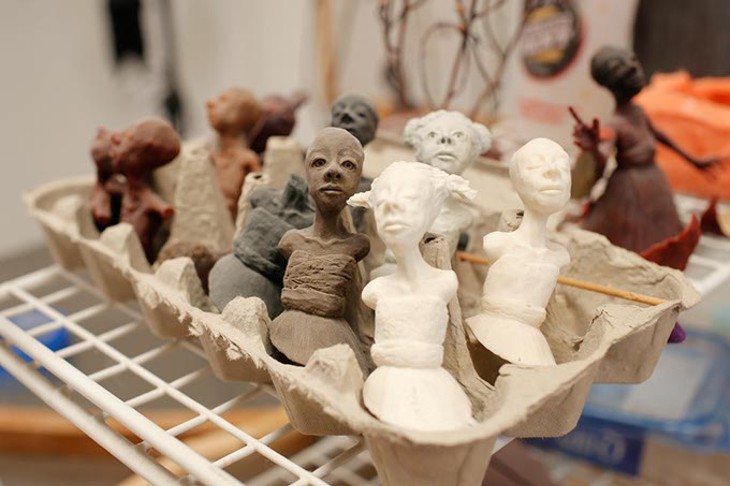 After completing her graduate studies at Stephen F. Austin State University in Nacogdoches, Texas, Wilson was introduced to a method of small-scale sculpture firing that ultimately determined the general size of her creations. The kiln space was about the size of a coffee can, so Wilson downsized her pieces accordingly — each between 4 and 8 inches tall — often using cigar butts to create the molds for their bodies. She also discovered that the miniature figures had big stories to tell.

“A multitude could become a mass,” Wilson said.

This is especially true of her Bloodline pieces, in which dozens of men, women and children walk in implied familial relationship along slabs of locust wood.

Bloodline is currently on display at the Bonner David Galleries in Scottsdale, Arizona, with an asking price of $120,000.

Wilson commands that price because her work is so singular — as individual as the faces on her tiny figures. She is a member of the Delaware Tribe of Indians and Cherokee Nation, and her artistic focus is to be a storyteller. This is borne out in several works in progress, including “I’m Still Here,” a mixed-media piece that captures the innocence of childhood, the history of Native American boarding schools and the difficulty of fighting cancer.

“It’s two little girls who are the same girl; it’s a commentary and a connection between cancer and the Indian boarding schools,” Wilson explained. “My sister had cancer, and she said the worst thing about it was that she was herself but nobody saw her anymore. Sometimes she felt like she was losing who she was — it was the combination of losing her hair and people wouldn’t make eye contact.”

She sculpts in wax and then casts the figures in bronze. Wilson said she plans to have the piece finished in time for the Santa Fe Indian Market in August.

“I was reading about how the children [at the schools] had their hair cut, they couldn’t speak their language and felt like they were losing their identities,” she said. “So the parallels between the disease and what happened at the schools is what the piece is about.”

Like the branches and found objects inside her studio’s drawers and cabinets, communities of diminutive sculptures with carefully detailed fingers and feet and unforgettably expressive faces reside in other drawers, huddle together on trays and silently sit along studio surfaces, sometimes for years, until their stories needs to be told.

“It takes a while for them to become something sometimes,” Wilson said. “Each one has its own soul or spirit.”