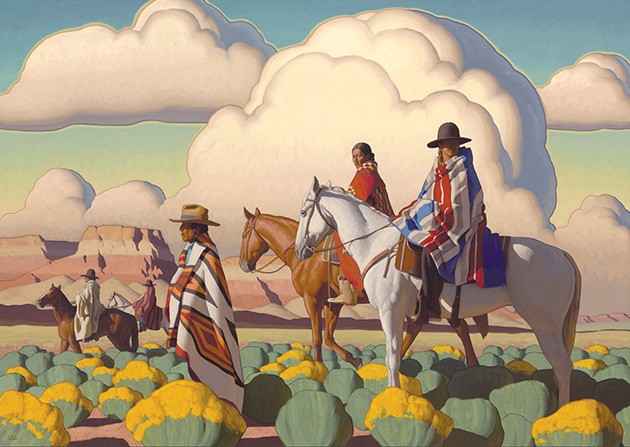 One of the residual effects of bringing nearly 100 of the country’s best Western artists into Oklahoma City for the annual Prix de West art sale and exhibition is the ripple effect and inspiration it creates in the artistic community.

The 47th edition kicks off with an opening weekend of seminars, demonstrations and awards June 7-8 at National Cowboy & Western Heritage Museum, 1700 NE 63rd St. The 296 works of art from 98 artists remain on display and available for purchase through Aug. 4.

Michigan-based artist Bonnie Marris presents this year at Prix de West for the third time and enters with momentum from previous years.

“It’s a huge honor to be in the show,” Marris said. “It’s easily one of, if not the best, in the country; it’s just a fantastic show. I was so amazed the first year that I went there because the museum staff and the collectors have an energy when you go into the show that I’ve never experienced elsewhere. There is an enthusiasm from everyone. It is almost shoulder-to-shoulder in the gallery. I came home absolutely fired up and hoping that they’d ask me again. It just about made my whole year. An artist gets their motivation from that kind of energy, and if you go to a show where there is a stillness, you come home if it was worth it to continue.”

Marris studied zoology and animal behavior at Michigan State University but left academics behind for field studies and artwork. She takes several field trips each year to photograph animals in the wild and then turns those photographs into huge paintings meant to convey the feeling of what it’s like to be that close to a wild animal.

Marris’ work at this year’s Prix de West includes paintings of a grizzly bear and an Arctic wolf she photographed while in Alaska. She found herself face-to-face with a grizzly and only a large creek separating them.

“When you’re that close to a bear, there is nothing you can do,” she said. “Your vision becomes so incredibly focused on the animal that you don’t see anything else. It is thrilling. Each time I’ve gotten close the bears, you can’t plan what you’re going to do because half the time, you’re above the tree line, and even if you aren’t, a grizzly can go up a tree faster than anyone. I wanted to show the intensity of the breath of the being that close.”

Marris said the chance to meet artists and collaborate, learn technique is an invaluable part of Prix de West.

“You bounce off of each other,” she said. “You see the greatest artists, and automatically, the standards for your art are raised so much higher. There’s no ego with artists at the whole show, and they’re so willing to share skills.”

Los Angeles-based landscape and portrait artist Logan Maxwell Hagege actually attended Prix de West a few times before he was invited to participate for the first time six years ago.

“[Prix de West] is such a major part of my world, and I just had to be part of it any way that I could,” Hagege said of his first experience. “It brings all of the artists together because most artists will do two to three museum shows per year, and it’s our one chance to connect with each other and people interested in buying our work.”

Hagege paints figures and landscapes of the Southwest, working with members of Apache, Taos and Navajo tribes to depict contemporary Native American life with a modern landscape.

He depicts his figures with landscapes that are both real and imagined. His piece “Sagebrush Wanderers” shows his subjects on horseback with real-life red cliffs of northern Arizona, while “The Sun Is Always Breeding” shows riders in a valley of imaginary green hills.

“The big sky, red cliffs and dotted sagebrush on the landscapes [of the American Southwest] really appeals to my aesthetic,” Hagege said. “I wanted the human element to come through and apply it to the people living in those regions.”

Matteson is a multifaceted artist working in film and writing in addition to sculpture work with wood, bronze and marble.

“Showing at the Prix De West and seeing the Cowboy & Western Heritage Museum evolve over the decades has been a real privilege,” Matteson said. “I feel like I’ve been a participant in that evolution. My work tends to push the boundaries of Western art.”

He has watched as the museum has expanded its narrative to include a broad fabric of history.

“Traditionally, that narrative is very narrow and European-American-centric,” he said. “Over the last 30 years, I’ve seen the narrative become more honest and relevant to the entire community of citizens to include indigenous, Asian and African perspectives.”

Each year, Cowboy & Western Heritage Museum selects a Purchase Award winner and buys a painting to add to its permanent collection.

Last year’s Purchase Award winner, Mian Situ, presents an artist talk 10 a.m. June 8. Situ’s piece “Clearing a Passageway for the Western End of the Transcon-tinental Railroad” depicts the work and sacrifice of Chinese immigrants to finish the project, which was a piece of history previous not explored at the museum, according to curator of special exhibits Susan Patterson.

At 9:15 a.m. June 7, Seth Hopkins, executive director of Booth Western Art Museum, gives a seminar that serves as a preview for a collaborative exhibit that showcases Andy Warhol’s love of the West, which arrives at Cowboy & Western Heritage Museum in late January 2020.

“Often, people don’t think of Andy Warhol and the West, but he was typically wearing cowboy boots and created a lot of imagery based on the West,” Patterson said.

Museumgoers can observe artists Charles Fritz, Oreland C. Joe Sr., Howard Post and Kyle Sims in action during demonstrations 1-2:30 p.m. June 8, and all seminars are free with admission to the museum. Art on sale at Prix de West ranges from $1,800 to $89,000, and the event serves as the museum’s largest annual fundraiser.

“Oklahoma City and the museum are incredibly hospitable, and I’ve made lifelong friends with other artists, collectors and staff at the event,” Matteson said.