Downtown Oklahoma City Initiatives revitalizes public interest in the city’s landscape and historical significance one installation artwork at a time.

Both artists and Downtown OKC Inc.’s Staci Sanger spoke with Oklahoma Gazette about the works-in-progress and public art’s impact on communities.

“The Artist Invitational is intended to showcase downtown through public art. It started as an invited call two years ago, and this year, we opened the proposals up to any central Oklahoma artist,” said Sanger, director of marketing and placemaking. “The program’s goals are to inspire conversation, whimsy and wonder through art.”

“The program is also meant to provide Oklahoma City artists an economic opportunity for creative expression,” she said. “We want to hear artists’ responses to the question, ‘How would you improve downtown through public art?’” 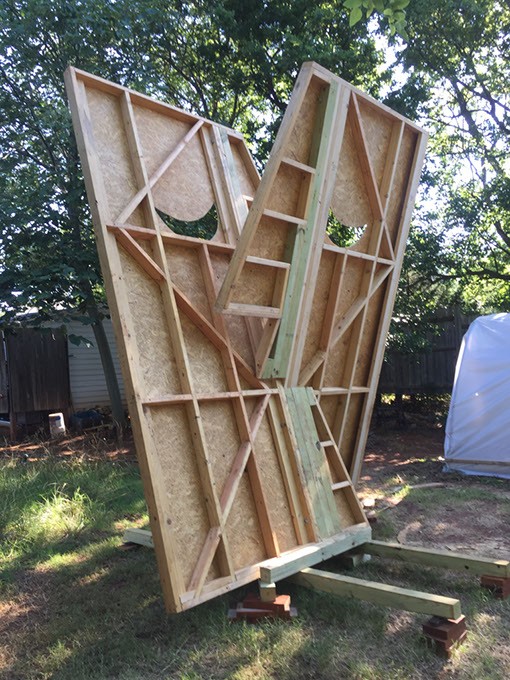 “Artistic sculptural seating is missing in the OKC area,” Mayorca said. “This project brings it to a small place, which will hopefully serve as an example to follow for other communities, parks and public spaces.”

“Our organization had already identified Hightower Park as a place in need of seating and activation,” Sanger said. “Beatriz’s sculptural seating not only solved the problem by adding places to physically rest, but also adding color to the visual landscape.”

“I’ve planned a system of public sculptural seating that encourages social activity and interaction in OKC,” Mayorca said. “All four chairlike benches are highlighted by the interaction of color, rhythms and repetition.”

Mayorca’s system combines vibrant colors with streamlined architecture. She  said her project’s location was a source of inspiration for her designs.

“It’s a dialogue between rigid and fluid, using colors to soften the rigidness of the straight architectural lines of the surrounding buildings,” she said.

A break in predictability can positively alter one’s mood and internal perception, and sets of aesthetically original, functional seating amid business buildings might just achieve that break.

Community connections can be engineered through art and design. Taking inspiration from architecture, physics and engineering, Schor’s in-progress sculpture “The Kiss” explores and deconstructs the idea of human connection.

“In short, this piece explores points of connection,” Schor said. “The piece originated from contemplating welding. Welding fuses two materials together, much like a kiss.”

“In Klint’s sculpture, the committee was struck by the potential of the sculpture to be an iconic image for Oklahoma City,” Sanger said. “It is a striking piece and could mean something different and special to each person who sees it.”

Although succinct in visuals, Schor’s project execution is anything but simple.

“I bridged two separate pieces with one single weld, thus creating a kind of tangent or ‘kiss’ connecting the two with a singular moment,” he said. “The concept is literal interpretation of a kiss, with the weld becoming the intimate connection point of two lovers.”

Similar to a yin-yang symbol, the figures are inverse and interlocking, sharing the same profile line.

“The figures are held into place by tension rather than an actual connection, reinforcing each figure’s individuality while relying on the other for its support,” Schor said.

Appearances are deceiving — the figures in Schor’s work are not fastened to one another.

“My hope is that people see themselves, despite race, gender or beliefs,” he said. “While that’s a lot to ask for of two hunks of steel, the idea of love hopefully creates a common thread.”

Sanger said the committee is still searching for a home for Schor’s sculpture.

“The ‘Kiss’ location has not been finalized but will likely land in the Central Business District,” she said. “We are currently working with the City of Oklahoma City to determine its home.”

No set date has been placed on the completion of each artist’s project. Sanger said the Initiative is hopeful to have both pieces installed before the end of the year.

The nonprofit organization plans to continue revitalizing and growing the community.

“It is the intention of Downtown OKC Initiatives to continue this program annually,” Sanger said. “Each previously selected project has had wonderful impact on the downtown community. We are hoping to see that impact grow and change each year.”