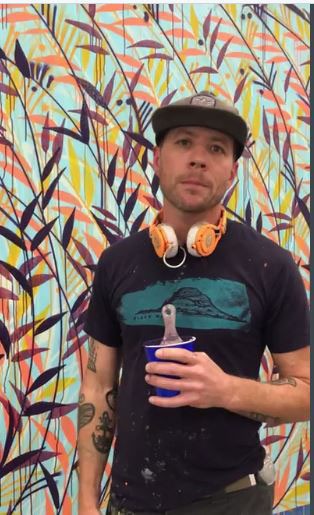 Oklahoma City muralist Jason Pawley is known for finding his subject matter within the natural world. One of Pawley’s earliest public murals is of a red-tailed hawk that made its home on the south wall of VZD’s Restaurant & Bar on Western Avenue.

Another one of Pawley’s public works, “Cultivation,” is inside the Santa Fe Railroad’s underpass at E.K. Gaylord Boulevard and Broadway Avenue, where a sea of leaves greets Bricktown area visitors.

“I’m trying to convey that it takes all of us working together to make a difference in helping other people’s lives,” Pawley said. “Some of us are more fortunate than others. Being able to give back and to help is a combination of all of us helping each other and getting together to help people who are less fortunate.”

The food bank approached Pawley to do the mural with the hope that he would give them a discount because they were a nonprofit, Pawley explained.

However, each party gained more than they intended.

When Pawley saw the activity and energy that surrounded Regional Food Bank of Oklahoma’s efforts, he gave more than a discount. Instead, he painted the mural for free.

“I had a bunch of good fortune this summer,” Pawley said about why he donated his time and resources. “There were a lot of paid murals; they weren’t just ‘exposure murals’ but actual paid murals. During the holidays, I started balancing my life out. If I’m doing well, I should be able to give back anything that I can, and that’s my time and talent.”

Pawley found inspiration in people working together to feed others in need.

There were no specific demographics among the volunteers other than being human.

“It takes every race, every gender, every class of people,” Pawley said. “It all has to feel and all has to work together to help other people. There’s a natural flow to that. I tried to convey some of that in the mural.”

Pawley’s training includes studies at Santa Fe University of Art and Design and a bachelor of fine arts degree in graphic design from the University of Central Oklahoma. Yet, he said, spending time in the outdoors hiking with his dog might be his best source of learning.

Whether it’s the Stinchcomb Wildlife Refuge or summer outdoor excursions to Colorado, New Mexico or Arkansas, nature is his best teacher as well as his spiritual center.

“It’s like my church,” Pawley said. “It’s where I go to think. It’s where I’m my happiest. I think more people miss getting out in the interior of nature and they don’t get to see it as much. They’re not as connected to it being in the cities. I like to bring what I enjoy and love back into the cities and back into these [mural] spaces. To me, that’s where I fill up.”

Pawley’s planned projects include a mural at Eugene Field Elementary at 1515 N. Klein Ave., completing commissioned works and participating in a mural expo this spring in Miami, Oklahoma.

Even when he’s not working on a mural or commissioned piece, he stays busy.

“I’m constantly creating or practicing on the walls of my studio,” Pawley said.

“Full Circle” will be seen by at least 42,000 volunteers annually, according to Regional Food Bank statistics, as the center distributes enough food for an average of 126,000 Oklahoma families on a weekly basis.

“I don’t think people realize the amount of children and the amount of people in Oklahoma who are going hungry every day,” Pawley said about the need for food bank volunteers. “Being able to volunteer there, you’re going to make quite a big impact in Oklahoma. That’s where to best spend your time to make the biggest effect in Oklahoma.”

Learn more about Regional Food Bank of Oklahoma at regionalfoodbank.org.