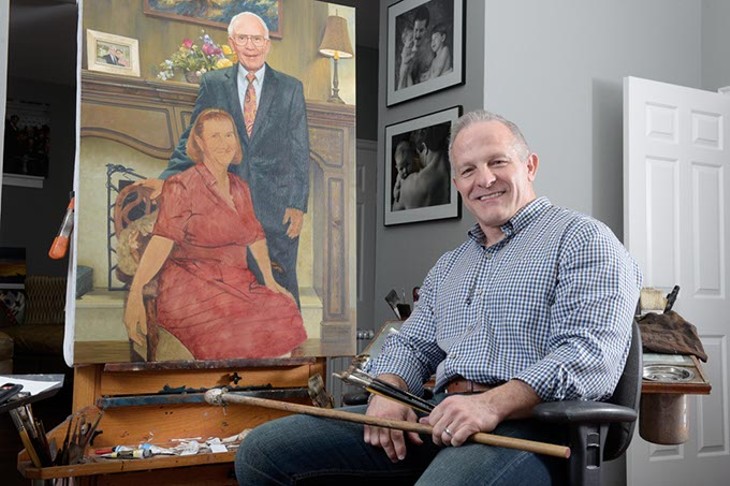 Mike Wimmer has impressive credentials. More than 40 of the Oklahoma artist’s paintings are on display at the state Capitol. He also has created some of the country’s most iconic pieces of commercial art, including Mr. Clean and the Brawny paper towel guy, and has designed book covers for some of the nation’s top publishers.

Wimmer recently added another prestigious credit to his resume as the newest artist-in-residence at The Skirvin Hilton Oklahoma City, 1 Park Ave.

The yearlong residency allows him to set up shop in the hotel, where he will work on his latest project.

“As a portrait artist, I am a natural observer of people and all of the differences that make us unique,” Wimmer told Oklahoma Gazette. “It is this diversity I want to portray. We have all observed the many people who feel their only way to make ends meet is by standing on street corners, holding cardboard signs saying ‘Will Work for Food.’ I was inspired to ask myself, and then later others, what they would work for. What inspires them as individuals to sacrifice their lives, their labor and their love enough that they will work for it?”

Wimmer said he will use the public window and the Skirvin’s centralized location as the base of operations for gathering his inspiration and research. He will also use the location to create and display his work.

“I want to help bring a visual display of answers to questions we are all asking, like ‘What gives life purpose?’” he said. “I want to contribute as much prominence to each model and each voice as I do to the corporate captains of industry, politicians and noted celebrities I have been commissioned to paint.”

One of his earliest inspirations for this project was a young man from California named Dwayne. Wimmer said he had hired him to do some carpentry work around his house when Wimmer was struck by his facial features.

“We talked a bit, and I learned Dwayne’s story as a former gang member in California,” Wimmer said. “He had moved to Oklahoma to make a new beginning and wanted to work to make a better life for himself and his family. So I showed him with his tool belt attached and holding a sign that says, ‘I will work to build a better life for my family.’ He is a perfect example of what I hope to document and capture in this project.”

The artist-in-residency program is sponsored through the Paseo Arts Association, and a different artist is selected each year.

Wimmer said the downtown location is perfect for his new project.

“The Skirvin is forward-thinking enough and involved in the arts, and they are supplying the studio that faces Broadway,” he said. “It has an open window to the world at street level.”

He’s expecting more interruptions but is looking forward to the interaction.

The diversity of the downtown workforce will make up the bulk of his work, Wimmer said. He hopes to capture all walks of life, from the business people who work in the office towers to blue-collar workers, local celebrities and politicians.

“I will set up a studio with my paints, palettes, canvases and easel so people walking by can observe the creation process,” he said. “And when I’m not there, they can see the paintings and sketches displayed as they are finished as well as some of the selected cardboard signs created during the process.”

When his residency is over, Wimmer said he plans to have an exhibition of the work he has created throughout the year. He might even consider producing a book to accompany the project.

“I have been a great admirer of humanity, with all its diversity, origins and destinations,” he said. “I have been an avid reader of biographies my whole life because of my curiosity. I have often wondered what makes someone a hero. What path did they take, what choice did they make that made them someone we celebrate as worthy of our attention? That is part of the origins of this project. I am very curious what people consider worthy enough, that they would sacrifice their time and labors toward that goal.”

Print headline: Inquisitive art, Artist Mike Wimmer uses his time as artist-in-residence at The Skirvin to study what drives people.