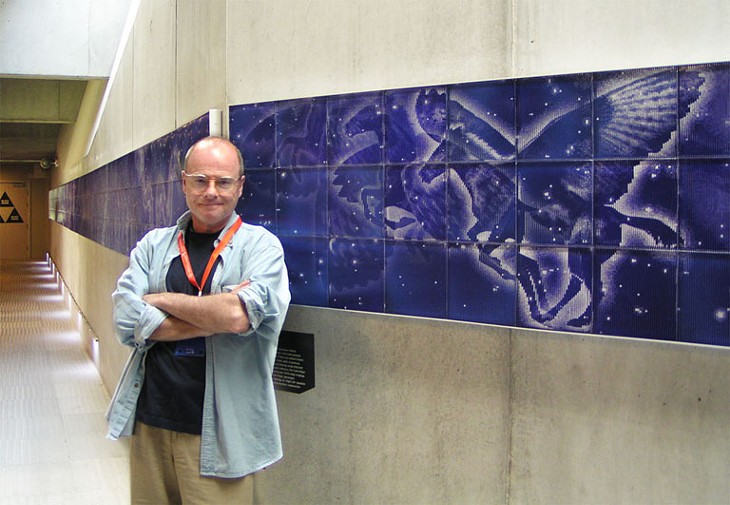 When Rufus Butler Seder was two, he got a toy in a Cracker Jack box. It was a little picture of a baseball player, and when you moved it, the picture moved. Like most young children presented with a neat optical trick, Seder was fascinated. Unlike most children, however, he turned that fascination into a career.

Seder is an artist and inventor who lives in Massachusetts and creates, among other things, murals that appear to move as the observer moves.

His art and inventions center around what happens between the eye and the brain, and that has been the focus of his life’s work.

His exhibition, Lifetiles, will be on display at Satellite Galleries at Science Museum Oklahoma.

Seder dived into the history of tricks and techniques for making objects appear to move. He studied magic when he was a child, and his father, a photographer, introduced him to different ways the eye can be fooled. When his interest in cinema led him to explore the history of motion pictures, he stumbled upon further inspiration for his craft.

“My favorite filmmaker is the French stage magician George Melies (A Trip to the Moon). His movies are astonishing,” Seder said. “I would have loved to work beside him in that magical studio of his in Paris.”

While he is demure about being a film historian, Seder is a confessed movie junkie. He has acquired an encyclopedic knowledge of moving pictures and the history of cinema, both before and after the advent of electricity. You can hear him speak about these influences and other tidbits of optical magic history during his presentation at the reception for the opening of Lifetiles.

In addition to his success as an installation artist, Seder has also created scanimation, books built on the principle of a flip book with the action all on one page. The medium uses an overlay pattern that, when moved, makes the image beneath appear to move. Several of his optically animated books, including Star Wars: A Scanimation Book, have become international best-sellers. Seder also has his own company, Eye Think, Inc., that creates all manner of gadgets that fool the eye.

Scott Henderson, who directs the Satellite Galleries, first heard of Seder from his Wizard of Oz Scanimation series. (Henderson’s daughter is a huge fan.)

“[Seder’s] work gets people asking questions,” Henderson said. “That’s what I want all of our guests to experience, because you never know what spark is left behind.”