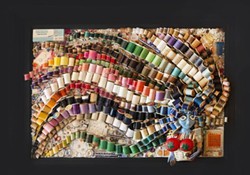 Shel Wagner, an Oklahoma artist who creates art from found objects, proves the maxim that one person’s trash is another’s treasure with her current show and art sale Cowboys and Caboodles. It runs through Dec. 23 at UMB Bank, 1217 S. Agnew Ave., in Stockyards City.

She describes herself as an assemblage artist. She incorporates found pieces she calls “tidbits” and “doodads” into her work.

“I’m all the time picking stuff up,” Wagner said. “And now, people bring me things.”

Before she pieces together those tidbits, Wagner paints a template. Many of the works in Cowboys and Caboodles also feature clay, and some are painted.

“I like for every inch to be covered,” she said. “Sometimes I’ll find something in a thrift store or in somebody’s trash that will inspire a piece.”

One such work, “Strummin’ Drummond,” came about after Wagner found a discarded guitar.

Wagner, who formerly worked on the Discover Oklahoma TV show, said her pieces all have a Sooner State slant to them.

“I just have a real passion for Oklahoma,” she said.

“The Oklahoma City art community is a really encouraging group of folks,” she said. “I feel like it’s a really close community.”

Cowboys and Caboodles is rooted entirely in Oklahoma, from form to content.

Wagner said the collection “started out cowboy-ish” but “migrated” to other symbols of Oklahoma, as in “Our Flag,” “Soaring Scissortail” and “Flirting with Redbuds.”

While the themes resonate with the state’s culture, so too does Wagner’s process.

“I make do,” she said. “I think it’s part of the Oklahoma experience to use what you have on hand.”

Cowboys and Caboodles also has a more personal connection to state history.

In the 1940s, Wagner’s paternal grandfather made sausage at the Armour meat company in Stockyards City.

“Being here with the show, I feel a sort of tie to him,” Wagner said.

She said her art is like a “different recipe but a similar process” to that of making sausage.

One piece in the show, “Clarita Amish Quilt Auction,” finds its parallel in another creative process. It resembles a fabric quilt not only in appearance, but also in its composite nature and time investment.

“The quilt occupied our dining room table for an entire summer,” Wagner said.

A close-up look reveals a mosaic of doodads and tidbits, but a long glance from farther back provides a complete perspective.

Wagner hopes viewers will consider pieces from both inches and feet away.

She said her work’s approachability might allow audiences to connect with it on multiple levels.

“As people are looking closely and they see an army man or an action figure they recognize … it engages them that way and then maybe a little bit of that social commentary seeps in while they’re just enjoying it,” Wagner said. “My work is a commentary on how much stuff we use in life and how much stuff we discard. Maybe somehow it would help us to throw away fewer things if they seem to have more value. We get to decide what’s pretty, desirable as an art supply.”

While it can be hard for some Oklahomans to access recycling programs or other sustainable options, Wagner’s art provides a useful outlet.

“People appreciate having a place to take their trash,” Wagner said.

Although the form and content of her work definitely have a social message, her underlying goal is “just that people feel joy.”

“Really the purpose is for someone to look at what you made and to feel something or to look at something in a different way,” she said.

Print headline: Trash, treasure, Shel Wagner’s new exhibit pulls inspiration from the past and the present.