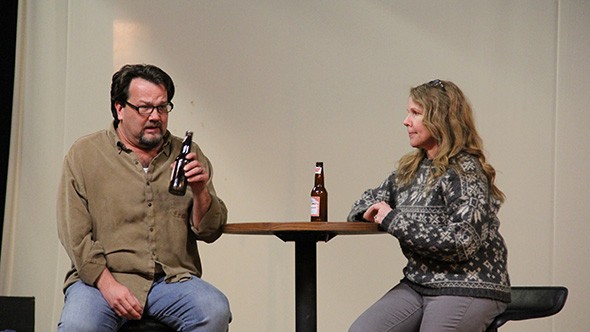 According to urban legend, “almost” only counts with horseshoes and hand grenades, but it also figures pretty largely in John Cariani’s 2004 play Almost, Maine, coming to Pollard Theatre, 120 W. Harrison Ave., in Guthrie Friday–March 2. Tickets are $15-$25.

Almost, Maine is composed of a series of several independent scenes about life in the titular town and what it means to live in a place called Almost. Situated almost in Canada and almost in the United States, the town clings to its tenuous existence, an ambiguous place marked by liminality, its in-betweenness.

Beyond a prologue and an epilogue, there are nine scenes in Almost, Maine. With evocative titles such as Her Heart, Getting It Back, They Fell, Where It Went, Story of Hope and Seeing the Thing, each mini-episode follows different residents of Almost as they fall in and out of love, according to director Matthew Alvin Brown.

Brown has been involved in theater for the majority of his life and began directing rock shows and musicals about seven years ago. While Brown has performed in several shows at the Pollard (including American Idiot, Passing Strange and Company) and collaborated with W. Jerome Stevenson on a production of Hedwig and the Angry Inch, he said Almost, Maine will be his directorial debut at the Pollard.

Initially, Brown said he wanted to direct Almost, Maine because if its fantastical qualities.

“I really resonate with the absurdist elements of this show,” Brown said. “It’s very funny and very sweet, sure … but the absurd magical realism just spoke to me.”

Brown wanted to emphasize the ways in which “almost” functions in the play, in terms of this magical realism that translates geographically and romantically throughout the show.

Although Almost, Maine follows several different character paths through and to love, the show’s cast is small, with just four actors. Consequently, Brown said finding the right actors was paramount since each has to play almost everyone, tapping into a character’s essence.

“They aren’t caricatures, and they don’t have time to hide behind wigs, etc.,” Brown said. “They have to find the subtle, honest nuance of each person, and quickly.”

Cast member Kris Schinske Wolf has worked as an actor in the Oklahoma City metro for two decades. Wolf is affiliated with Oklahoma City Repertory Theatre (CityRep) as well as the Actor’s Equity Candidacy program and has performed in three shows at the Pollard, most recently in  last December.

For Wolf, the biggest challenge that Almost, Maine poses is one of distinguishing different roles from each other, especially because all the characters are from the same town with similar backgrounds and ages.

“We want to honestly represent different people in the town without becoming caricatures,” Wolf said.

To prevent flattening out characters when playing multiple roles, Wolf said it’s helpful to develop histories and backstories for each.

“Each scene represents a glimpse into the lives of each of the characters and tells a complete story in and of itself,” Wolf said. “Although the characters know one another, we only see them interact with one or two others throughout the play.”

Wolf said part of the magic of performing in Almost, Maine is bringing to life a world “where the figurative becomes literal.”

“Because Almost, Maine is magical and wonderfully peculiar, we all want to honor that spirit, allowing the scenes to naturally be what the playwright intended without trying to make them ‘funny,’” Wolf said. “John Cariani is a smart and funny man. We can trust that and let his stories do the work.”

All the work behind the scenes comes in order to create situations that ring true and with which the audience can identify, Wolf said, noting that the play is about finding love but also losing it, too.

The play is family-friendly, but Wolf said it also makes a great date night, especially since it runs through Valentine’s Day.

Jared Blount, who has worked in theater professionally for the past decade and at the Pollard for the last six years, also described the challenges and rewards of playing multiple roles in Almost, Maine.

“I play five different characters,” Blount said, “but oddly enough, they have some pretty noticeable similarities. The greatest challenge so far has been bringing enough honesty to each character to make them relatable while finding the subtle differences that make them unique.”

Blount said each of the show’s romantic vignettes also has a “unique touch of Jiminy Cricket” and creates a quirky kind of magic that translated into a rewarding experience as an actor.

“Working with a director like Matt makes the job seem easier than it should be, and you leave every rehearsal thinking, ‘Was it supposed to be that fun?’ But then again, that’s pretty typical at the Pollard,” Blount said. “And I think that’s what audiences recognize more than anything at that place — how much fun the whole experience is.”