Cowboys and Indians might suggest childhood play, but the upcoming exhibit at the Oklahoma Hall of Fame at the Gaylord-Pickens Museum creates an artistic juxtaposition between two recent Hall of Fame inductees — artists Harold T. “H” Holden and Mike Larsen.

Bringing together the two friends — an actual team-roping cowboy sculptor/painter and one of the most respected artists to emerge from the Chickasaw Nation — gives the notion of cowboys and Indians new resonance.

The two artists also offer a unique study in stylistic contrasts. Holden is known for the remarkable realism of his sculptures, particularly his work depicting horses, while Larsen delivers strikingly expressionist depictions of his fellow Native Americans. Holden, who is known for public monuments such as “Boomer” at Enid’s Cherokee Strip Conference Center, works in a realistic style that projects movement and energy. He described Larsen as a vivid, expressionistic artist who captures the true essence of his subjects.

“The thing about Mike is that he’s got this style with the Indians that most people recognize — kind of a little abstract,” Holden said. “He can do realistic, too, but he’s got this style that he’s had that’s — I don’t know how you’d say it — they’re realistic, but they’re exaggerated. Great color and everything. He can do everything, but that’s what he’s known for.”

Larsen, who recently published his autobiography, Don’t Never Let Go of Your Horses: Looking Back, is known for his large-scale works in painting and sculpture. These include 2012’s sculpture “The Arrival” at the Chickasaw Cultural Center in Sulphur and his massive 1991 mural in the State Capitol rotunda, “Flight of Spirit,” which depicts the Oklahoma Native American ballerinas known as the Five Moons: Yvonne Chouteau, Rosella Hightower, Moscelyne Larkin, and Maria and Marjorie Tallchief. Larsen praised Holden’s work for its sharp-eyed realism. 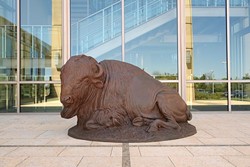 “My things are pretty stylized, for lack of a better word,” Larsen said. “I don’t know, quite frankly, of anybody else around who is painting like I do. ‘H,’ on the other hand, is very realistic and very good at what he does. I think it’s going to be a very good show just because of that. The differences between he and I are pretty obvious. I think you could call both of us very stylized — his style is very real, and mine is more expressive.”

Despite their differences, Larsen and Holden both spent their artistic careers capturing the spirit and history of their cultures. In recognition of those efforts, the Oklahoma Hall of Fame inducted Holden in 2014, followed by Larsen in 2015. With Holden’s induction into the National Cowboy & Western Heritage Museum’s Hall of Great Westerners, he becomes the first Oklahoma artist to be inducted and only the 10th artist overall since the awards began in 1955.

An opening reception is 5-7 p.m. April 20 at the Oklahoma Hall of Fame. An artist talk is 6 p.m. July 27. It provides an in-depth look at the artists and the people and events that inspire them.

For the exhibit, Raglin said she expects that pieces by both artists will be placed alongside each other, establishing a dialogue between Holden’s depictions of working cowboys and Larsen’s historic and modern works illustrating the Native American experience.

“I don’t think I’ve ever seen an exhibit of this caliber,” Raglin said. “I think we show that both of them have spent their time honing in on their skill sets, so they’re very similar in their dedication to their craft.”