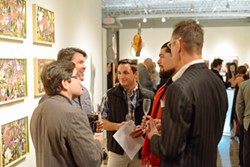 Anthony McDermid, one of the event’s co-chairs, said ArtNow will be the first big social party of the new year.

“You get about three weeks to get over your hangover,” McDermid said of those who might need awhile to recover from the holidays.

This is the fifth year of the event under the ArtNow format. Though there is a one-day buying event, art from the 25 participating local artists will be on exhibit at Oklahoma Contemporary from Jan. 11 to the event date, giving wise buyers a chance to scout out works they might be interested in purchasing.

General admission starts at $50, but those with $150 VIP tickets get first choice. McDermid playfully compared the rush to buy the art to the crazed Black Friday shoppers you see on the news.

Each artist on display at this year’s event is both an Oklahoman and entirely new to the ArtNow exhibit. All the art on display is original to the show.

McDermid said he was especially thankful for the curators of the exhibit, Kelsey Karper and Julia Kirt.

“These gals spent a lot of time touring, looking at artists’ work and putting together a huge variety of locally produced art,” he said.

Teresa Rose Crook, the event’s other co-chair, said one of Oklahoma Contemporary’s chief goals is to increase arts access in Oklahoma City. It is also the only dedicated exhibit space for contemporary artists in the city.

She said those who are able to take part in the arts are bound to appreciate it on a greater level. For a place dedicated to increasing arts access, ArtNow is the perfect fundraising event.

“It’s a non-intimidating place and way for people to get engaged in art,” Crook said. “If they haven’t really done a lot of art buying, they’re not quite sure if that’s the right piece or whatever, it’s a very friendly, fun atmosphere to start really getting into and learning about art and how much fun it is.”