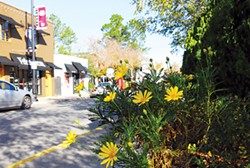 In the absence of Dustbowl Arts Market, Erin Patton sought a new art festival to bring to Norman. Arts on the Corner runs 9 a.m.-3 p.m. May 7 on Buchanan Avenue in Campus Corner.

Dustbowl Market gave vendors a spot in the university area’s commercial district. When its organizers moved away, the event fell by the wayside. Patton said when she was hired in 2015, one of her first goals was to bring a festival back to the district.

The corner buzzes with activity during University of Oklahoma home football games, but Patton said the area also has a lot to offer on the other days.

“We have such an awesome area that it really is a great backdrop for an arts festival,” she said.

Arts on the Corner also features musicians stationed across the festival area. And to foster family-friendly creativity, sidewalk chalk stations will encourage youths to draw and liven up streets, organizers said.

“Everyone’s really excited to have an arts festival coming back to Campus Corner,” Patton said.

Though the festival is a one-day event its inaugural year, over time, she hopes to grow it into something more.

“The goal is every year to add more time, eventually add another day and to add more aspects to it to make it a big community festival,” she said.

A portion of event proceeds will benefit a Norman Public Schools Art Foundation program that offers local teachers utility carts stocked with whatever they might need to teach their curriculum for that day. Patton said it takes between $800 and $900 to start one of the carts.

“We’re hoping to get at least three or four funded this year,” she said.

Many local vendors have been accepted to participate in the event, but a handful of spots are still left. Organizers are seeking artists, photographers and people who create their own unique and interesting things.

“Campus Corner is such a beautiful area to have something like this,” she said. “The trees will be nice and green, and hopefully … the weather will be perfect for walking around.”

Print headline: Cornering creatives, Arts on the Corner marks the return of an arts festival to a popular Norman retail district.

Arts on the Corner