[Artspace] at Untitled builds momentum with its Steamroller Print Festival 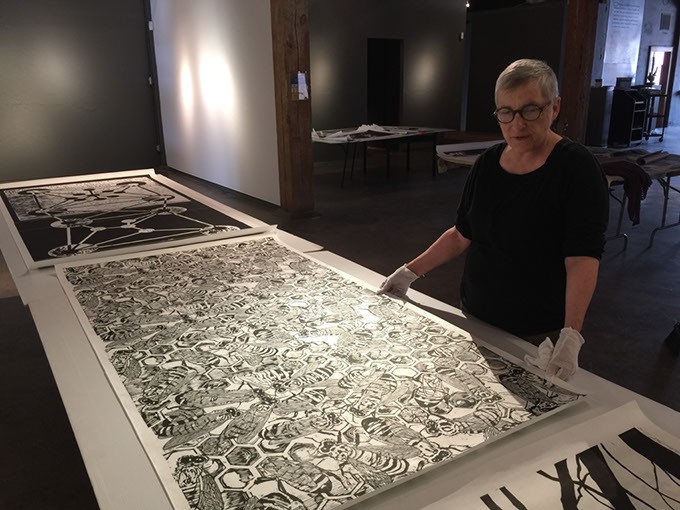 As workers frame out a new entrance on [Artspace] at Untitled’s north side, Laura Warriner sorts through dozens of Big Ink prints — elaborate, large-scale woodcuts that will serve as both focal and reference points for the second Steamroller Print Fest May 5-6 at the multipurpose art facility, 1 NE Third St., in Deep Deuce.

“These prints are part of their permanent collection,” said Warriner, [Artspace] at Untitled executive director. “I had them ship even more than we could hang, but we’ve got all the walls painted, and we’re going to start hanging.”

Big Ink, a Florence, Massachusetts, printmaking company, specializes in carving, printing and marketing massive woodcuts created by artists at Big Ink events throughout the country. The collection is shown around the world, including a recent stop at the Seoul Museum of Art in Seoul, South Korea.

The festival runs 6:30-10:30 p.m. May 5 with a Cinco de Mayo celebration featuring demonstrations by local artists, live music, drinks and a catered buffet. Admission to Friday’s event is $30, or $50 per couple.

May 6, Steamroller Print Fest earns its name 10 a.m.-6 p.m. when visitors, including [Artspace] at Untitled mentorship program students, can create their own woodcuts, which are then inked and sandwiched between housewrap and an industrial steamroller outside the facility.

“We have a wire across here so that when we finish a print, we can take the print and hang it to dry,” Warriner said. “Then, we’re going to wrap the building with the prints that we steamroll.”

The event also features a children’s printmaker tent, along with screen-printing demos, live music and food trucks. Printing ends at 6 p.m., with live music and viewings until 9 p.m.

Events like Steamroller Print Fest are part of Warriner’s ongoing mission to provide an open space for art and education. In 1995, long before many considered it a good real estate investment, Warriner purchased the long-abandoned warehouse at 1 NE Third St. A few months earlier, the two-story building on the western edge of the Deep Deuce District sustained damage from the terrorist bombing of the Alfred P. Murrah Federal Building.

But Warriner had a vision for the building, even if she didn’t have a name for it. For years, it was known as Untitled Gallery, eventually becoming [Artspace] at Untitled to reflect its use as a creative and event space.

Warriner said she hopes that events like the festival, as well as some of the major improvements she is making to the space, will make the 20,000-square-foot building a Deep Deuce hub as the historic district grows. Inside, Warriner has antique bookbinders, lead type printing presses and other implements once considered obsolete but now given new purpose as instruments of art.

All of this is being done to fulfill Warriner’s original plan to make [Artspace] at Untitled an everyday destination for creatives to find inspiration and act on it.

We’re trying to make a place where people can be exposed to the many ways in which art impacts their lives,” she said. “We want them to know that art is everywhere, and it can be everywhere in your life.”