As a 17-piece pop collective, more is more for The Polyphonic Spree 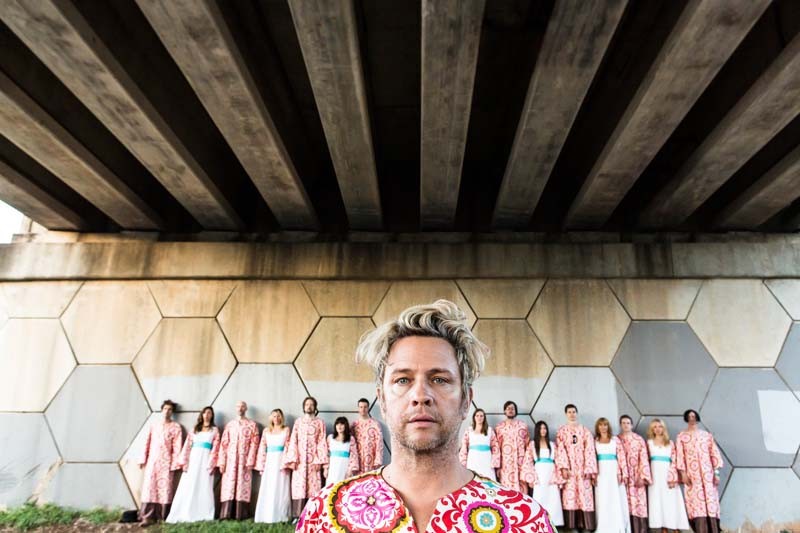 DeLaughter just needed to know what certain instruments sounded like blended together — and how 10 people singing instead of just one might change an arrangement. The forum for these ideas was a collection of musicians who shared DeLaughter’s curiosity and were eager to see where it went.

After the first show in 2000, DeLaughter’s friends brought very real concerns to his attention when they saw what he was tinkering with: an enormous musical troupe, which today lists 17 musicians on its roll, trying to make music and function as a viable entity. His friends meant to reality-check him back into a musical troupe that looked more like a traditional band and less like an army of fantastically robed spacemen.

“‘Man, this is really great,’” DeLaughter said, repeating the kinds of things people used to say to him, “‘but you really need to think about this. It’s not going to be something that’s easily toured. You’re going to have a difficult time.’”

DeLaughter had never thought about making this experiment into a band, but he decided to try to get another gig.

“It was just like, ‘Let’s get it moving and see where it takes us,’” he said. “We were asked to play [David] Bowie’s festival in London, and once we did that, we realized we could make that jump. And the band blew up over there. We spent the next three and a half years over there in Europe.”

The Polyphonic Spree has had to tighten its belt to make it work, but the Texas-based band has succeeded, even with its populous roster.

“This band tours easier than a five-piece band I was in. It’s a lot more expensive, but it’s actually pretty easy except for the expense of flying,” DeLaughter said, adding that it’s difficult, financially, for him and his family. “We’re paid as a four-piece band, but there’s four bands in this band, so the math never really works out. It’s exhausting for us, but we do what we gotta do.”

And if they’re an army, The Polyphonic Spree attacks on three aural fronts: symphonic, choral and psychedelic. The triune nature of the band’s sound has been its stamp since day one, when they began mingling symphonic and electric instruments.

“I think the elements of adventure came from Tripping Daisy — because Tripping Daisy was total power pop — but it became a more experimental kind of pop,” DeLaughter said of his former band, which disbanded in 1999. “I think the adventurousness of that band is what spawned The Polyphonic Spree in the first place.”

Back in his Tripping Daisy days, DeLaughter frequently found himself wishing he could include instruments that weren’t traditionally found in pop music. Since those instruments weren’t available, they would do their best to create the effect synthetically.

Much of their sonic tinkering is bankrolled by the unexpected popularity of a song from their debut album, The Beginning Stages of.... The soaring, supercharged “Light and Day/Reach for the Sun” has enjoyed enduring popularity since 2002, appearing in numerous movies and commercials.

“It was amazing because I almost didn’t put the song on the record,” DeLaughter admitted. “I didn’t feel like it fit with the rest of the record. But my wife insisted that it went on there, and thank God she did because it has basically kept the band going.”

“We’re definitely a lot more electronic on this record than we have been before, and there is a ballad side that we’ve never done before. It’s the most mature record we’ve made to date in regard to restraint and instrumentation,” DeLaughter said. “At the end of the day, it’s art. You have to be able to evolve and still make art. And part of that is coming into the understanding of what you’re about and who you are as a group. And I think we’ve always done it, but I think we’re getting really good at our craft.”