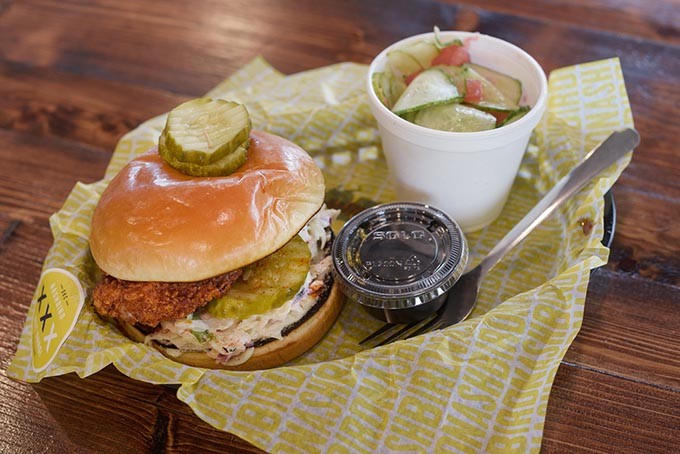 About five weeks after opening his second Automobile Alley restaurant, Marc Dunham is hoping the name of his newest eatery, Nashbird, isn’t too limiting.

The concept of Nashville spicy hot chicken has gone from cult regional status to the national zeitgeist now available as a “Spicy bird with a savory bun” at KFC.

“I struggled with the name because I love it, but at the same time, I want to do different flavor combinations,” said Dunham, who also owns Iguana Mexican Grill.

“There might be chipotle-lime or a Korean fried chicken with kimchi so that it’s not hyper-specific to Nashville. When people say Nashville, it’s kind of pigeonholing me in one regard, but I chose the name, so it is what it is.”

Dunham opened Nashbird at 1 NW Ninth Street in August, on the same block as Iguana, after his business partner and landlord Steve Mason let him know the location was available.

Dunham is a graduate of the prestigious Culinary Institute of America in New York and has experience in the fine dining kitchens of the Big Apple.

“How me and my chef friends eat when we’re not at work is totally different,” Dunham said. “I wanted counter service because trends nationally are pointing to people liking the friendliness and ease.”

Dunham moved to Oklahoma City in 2009 from Austin to be closer to his wife Jenny’s native home. After revitalizing Iguana, including overseeing its renovation this year, Dunham felt fried chicken was the perfect way to branch out.

“There aren’t very many people here concentrating on fried chicken outside of the big chains,” Dunham said. “I didn’t overthink it.”

Walk up the stairs to the entrance of the restaurant and you are greeted by a server ready to take your order behind the counter. Customers choose from four levels of spice ranging from chirp (mild) to crazy-hot.

Chicken brines for 24 hours in saltwater, which displaces liquid in the muscle of the chicken and makes it juicier. The salt in the brine and in the seasoning after frying almost acts as a natural preservative.

“You can buy this chicken, store it in the refrigerator for two days, and it will taste exactly the same,” Dunham said.

Cold fried chicken, which is behind only pizza in terms of popularity as an unheated leftover, is served to order by request and when they’ve got ahead on demand.

The chicken is served cold, in baskets of white, dark and mixed meat or in eight-piece buckets. Different from the spicy Buffalo version of fried chicken, the Nashville-style is oil-based instead of the vinegary hit of hot sauce.

Dunham provides nuanced flavor for the bird through the use of a secret blend of spices that have been bloomed in oil before being applied to the bird. After the bird comes out of the fryer, it is brushed with oil and spices for a kick that is spicy and complex.

“This spice mixture is different than the one used in Nashville. It’s got cayenne but other things that are not traditional,” Dunham said. “Better-quality spices and the younger they are from the ground to the grinder is going to make them more aromatic because spices have essential oils in them. The longer they sit out and get oxidized, the less fragrant they are.”

Spicy chicken breast serves as the star of the sandwich, available on a brioche bun or biscuit. The traditional sandwich is served with lemon coleslaw that Dunham said has received compliments from people who don’t normally like coleslaw because it is more vinegar- than mayonnaise-based. 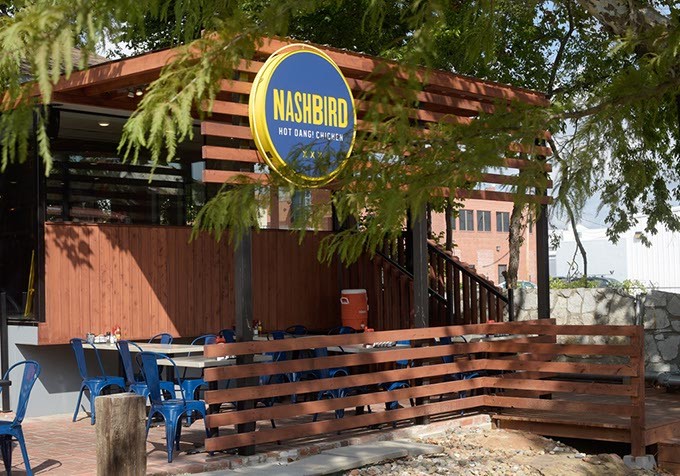 “From the heat seekers, I kept hearing that the chicken wasn’t hot enough,” Dunham said of the “crazy hot” version.  “I upped the amount of ghost pepper, tweaked the recipe and people are like ‘Holy shit! This is hot.’ Well, this is what you wanted.”

Dunham said that he only taste-tests the hottest version once a week to make sure the kitchen staff is preparing the mixture correctly. It’s only for those who are actively seeking the endorphin rush that comes after putting yourself through pain.

“The hotter you get, the less you can taste the rest,” he said.

Dunham said that Nashbird will begin to unveil new flavor combinations, such as a Korean style, in the coming weeks.

“It’s a lot of fun to know we can take the spices in a different direction,” he said.