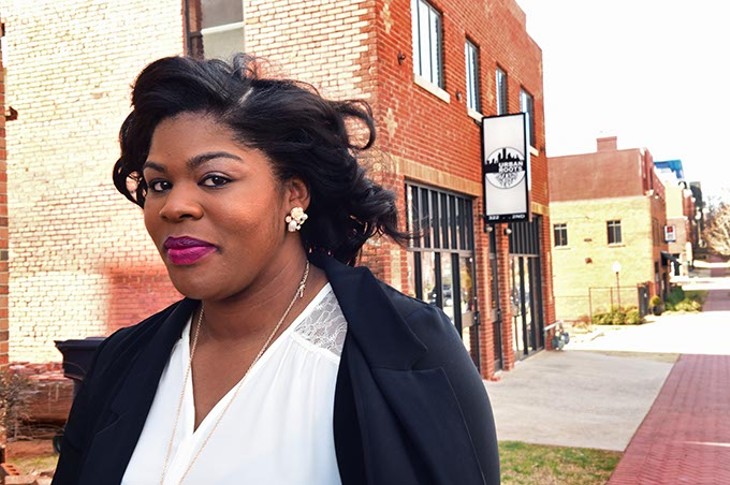 Transformative moments occur when our understanding of the world runs up against a different culture or experience and we are open enough to allow the new thing to change us. For Ashley Stevenson, it happened as a Girl Scout at age 16, while sitting in an African village, eating goat.

Stevenson founded and owns Foodie Foot Tours, a new company that organizes and leads food tours through historic neighborhoods for $40 per person per tour.

Foodie Foot Tours works with locally owned restaurants, and Stevenson insists that the tours cover areas that have interesting histories.

In November, she toured Deep Deuce with 14 guests and stopped at Deep Deuce Grill, The Wedge Pizzeria Deep Deuce and Urban Roots. As part of the package, she said restaurants provide a minimum of three samples from their menus, and Stevenson joked that many participants were full after their second stop.

Her longtime scout troop, formed when she was in kindergarten in Tulsa, eventually traveled to Africa with a missionary organization to offer needed services and items, including books, hygiene products, clothing and health education.

“During my two weeks there, I had to adjust to a different standard of living,” Stevenson said. “We couldn’t wear pants, couldn’t eat certain foods because of diseases and had to adapt to their foods.”

That is how she ended up eating goat, and the experience as whole transformed her. She played soccer on scholarship in college, and during graduate school, she worked for an airline. Because food played such a huge role in her emotional and intellectual development, she decided to experience the world via food.

She returned to Oklahoma in 2011, but a house fire destroyed everything in 2014. During her time away from work, she decided to pursue a career that made her happy. Blogging about food was a favorite pastime, so she created a way to bring the blog to life by means of foot tours through Oklahoma City’s culinary past and present.

She has tours set for March 14, 21 and 28 and will add more dates as necessary, including private tours for groups or corporate events. Adding neighborhoods is her immediate priority; she plans to add another by May, and Plaza District is a strong candidate. Visit foodiefoottours.com for more information.

Print headline: Edible adventures, After childhood travels to Africa and a house fire in 2014, Ashley Stevenson found happiness by creating her own company, Foodie Foot Tours.