At Grub, the best dishes are the simple ones

Del City is right there.

I’m not sure why it always feels a world away. Maybe because that’s where my dentist’s office was as a kid. Maybe because people don’t seem to talk about it much.

But it’s there. It’s 10 minutes away. Sometimes I can’t find parking downtown in 10 minutes. Bear in mind, I am not good at parallel parking. Or really any parking. I might need to talk to my ophthalmologist about depth perception.

Thankfully, my taste perception still seems pretty good. Even as the lights slowly dim and I find myself walking blindly through this world, I can tell you that the food at Grub, 5501 S. Main St., Suite 102, in Del City is good.

Grub bills itself as a scratch kitchen, which means it’s making what it serves. In a better world, that wouldn’t be a novelty. But in a better world, Oklahoma City wouldn’t have restaurants that sell chicken-fried steaks that come pre-breaded and frozen.

Not at Grub, though, which accounts for its simple, focused menu. And, believe me, that’s not a pejorative. More restaurants should have the confidence in their product to go small.

The base for many dishes is the roasted chicken ($9 for a half bird), which is tasty and simple. An enjoyable rub of seasonings, a little time spent in the oven and then it’s served to you. Well-seasoned and crisp chicken skin is a delicacy to itself, and more so when it comes attached to a tender, juicy bird.

(If you’re looking for something a little sweeter, Grub also does a version that’s basted with a honey barbecue glaze.)

Some chickens are destined to be carved up for salads, like my personal favorite The Farmers Market ($9). The chilled, thinly sliced breast is tossed with apple slices, Mandarin oranges, strawberries, almonds and fresh greens.

I loved the fruit, though for that price, I wish there was a bit more of that and a bit less lettuce. I also wish I’d gone for an oil-and-vinegar dressing instead of the Mandarin vinaigrette, which was a touch too sweet for my tastes. Even so, it was fresh, light and better than many salads. The chicken also goes into the chicken salad sandwich ($9), which shouldn’t be a surprise to anyone. Mixed with mayo, mustard and honey, it is definitely on the creamier side, but the crunch of the celery, onion and pecans gives it body and the flaky croissant adds a satisfying chew. 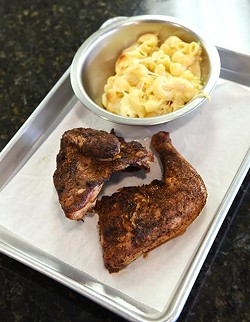 The sides were a real treat, though. The fresh green beans were as-advertised, and the home-style mac and cheese was a perfect blend of velvety and crunchy. Will I ever be mad at burned cheese? Of course not. Especially in this dish.

But the winner for me was the red potato salad loaded up with a flavorful dressing; chewy bacon; and big, tender chunks of potato.

Grub has a rotating cast of daily specials, but it’s always a good idea to get the meatball sub when it’s available.

I was less impressed with the Big Pig ($10), its pulled pork sandwich. The ciabatta bread was ill-suited to the task of holding in all that hearty meat. And the pork, while moist, mostly tasted like barbecue sauce.

Indeed, there’s nothing overtly fancy about Grub. The place looks clean, and its sense of style makes it clear it has its eyes on future restaurant expansion. But right now, Grub is focused on making its menu mouthwatering and making diners comfortable.

And for people who don’t think about going to Del City much, Grub isn’t too far away if you’re looking for a simple menu done well.

What works: The roasted chicken and the potato salad are tops. What needs work: The pork sandwich needs less grease and more flavor. Tip: If you’re getting it to-go, help yourself to the plasticware.