X Ambassadors aims for unique, interactive audio experiences in an effort to be more inclusive. 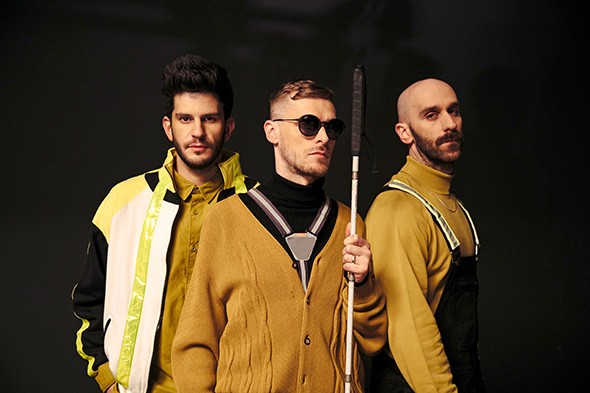 “We wrote some great songs,” said keyboardist Casey Harris of the New York three-piece’s first attempt at recording a follow-up to platinum-selling full-length debut VHS. “I love some of the material we came up with during that time, but we weren’t really able to come up with a cohesive body of work that we thought also would be, for lack of a better word, relevant enough to make a splash and for fans to actually listen to.”

X Ambassadors plays 6:30 p.m. Oct. 13 at The Jones Assembly, 901 W. Sheridan Ave. Though the band released singles “Joyful” and “Don’t Stay” from the unreleased album, Harris said X Ambassadors was only able to record a satisfactory second full-length — Orion, released in June — after taking a long-delayed break from the road and connecting with a new producer.

“After VHS, we were touring pretty heavily,” Harris said. “We toured for a solid three-plus years off that album, and so we were trying to record the next album kind of in between tours and a little bit on tour here and there. That’s how we did VHS, pretty much exclusively on tour. … It took us finally biting the bullet and saying, ‘Let’s get off the road for a while and actually focus on writing and recording.’ We were in lots of different studios and in people’s houses, but it was dedicated writing and recording time. We also started working with Ricky Reed toward the end of that process, and he really helped us figure out what the sound of that record was going to be, that it was going to be alternative-rock-leaning rather than the sort of soul-pop-leaning that we had done with ‘Joyful’ and ‘Don’t Stay,’ and I think that ended up being a really smart decision because I think as much as those were great songs and we’re able to write like that, I think it might have been a bit too strange of a departure for a lot of our fans and, I think, for us as well.”

X Ambassadors met Reed while working with Lizzo on Cuz I Love You. Harris and his bandmates — brother and frontman Sam Harris and drummer Adam Levin — are credited as cowriters and producers on “Jerome,” “Heaven Help Me” and the album’s title track, all of which Casey Harris said were recorded in three or four days in “kind of a whirlwind” after his brother asked their agent to connect them.

“Sam knew about her long before she started blowing up on the scene,” Casey Harris said. “He was a fan, and he played her music for us and we all became fans. … We were in the mode of writing with whoever we possibly could at that time, and we were lucky enough that she was one of the few people who said, ‘Yeah, I’d be willing to work with these guys even though I’ve never heard of them before.’ … She is such a powerhouse, man. She can sing and rap, writes so fast and then also is not only like a concert-level flautist, but she also has this deep knowledge of music. She was referencing some, I don’t even know, like a Tchaikovsky piece that I’d never even heard on ‘Cuz I Love You’; that little descending horn line on the very end, that was completely her idea. … I’d never even heard of this classical piece, so I had to go look it up.”

The band’s ability to effectively collaborate with artists ranging from Lizzo to Imagine Dragons to Eminem is indicative of its comfort level in multiple genres, which Casey Harris said is the band’s “greatest strength and weakness.”

“We can write and perform, not anything, but we have a wide range of musical styles we’re well versed in,” Casey Harris said. “We grew up listening to lots of different types of music. That was one of the things that Ricky helped us with, is that we love doing so many different styles, but it’s hard for us to pick one and stick with it.”

Training as a piano tuner, Casey Harris said he “fell in love with a wide range of sounds the instrument can make and how versatile it is and how many different types of music you can use it in.”

“Guitar is extremely versatile as well, but the piano, if you have no electricity on in your house but you have an acoustic piano, you can put on a full performance with no amplification. You don’t have to turn it on ever at all. You just sit down and play and it sounds rich and full. … Definitely being a tuner gave me a huge appreciation for just what a powerful instrument it is, especially in this day and age of everything being synthesized and amplified.”

Casey Harris, visually impaired since birth because of a rare genetic condition, sometimes has difficulty using modern software synthesizers and plug-ins due to their inaccessibility. 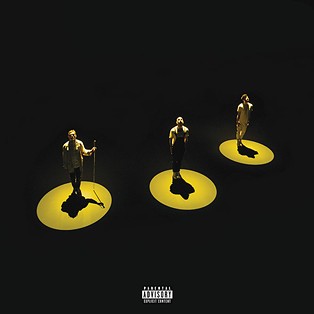 “I’ll pick one or two softsynths and just focus on painstakingly learning the controls for those,” Casey Harris said. “I’ll try to find the ones with the best presets on the greatest range of sounds, and then I’ll just take my time and learn those and make a lot of my own presets. … It is a shame though. I used to be really into synth programming back when I used hardware synths, and now I tend to just use whatever the presets are.”

The band collaborated with Microsoft to create an audio-only music video for the single “Boom.” Through field recordings and spatialized sound technology, an app available on Apple, Google and Microsoft mobile devices guides listeners on an interactive audio tour around the Harris brothers’ childhood home in Ithaca, New York, and the streets surrounding their former rehearsal studio in Bushwick, Brooklyn.

“VHS was an album about where we came from and what made us into who we are today, and this album is more about who we are now and who we’re looking to be,” Casey Harris said. “We were talking about what really represents where we’re going in life, and Sam was the one who actually suggested that John was one of the newest, most amazing things in our lives, so it fit. It made sense. … He loves music, man. It’s the funniest thing. Usually if he’s getting fussy or just a little over-antsy, we’ll have him settle down just for a second and play him music, definitely some of the tracks from the album. He’ll sit there mesmerized most of the time. A lot of times, he’ll take his little maracas and he’ll play along. He’s very musically gifted.”