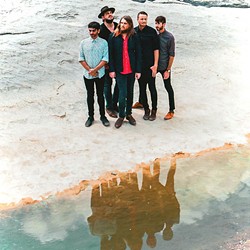 Nash performs 9:15 p.m. April 29 on Norman Music Festival’s (NMF) Bud Light Depot Stage. The fest features plenty of bright — even brilliant — performers every year, but a master’s degree in political science from the University of Missouri is a nice distinction.

“I was really just trying to bide time,” Nash said in a recent Oklahoma Gazette phone interview. “College was alright, so I just thought I could keep going to grad school and bide some more time. I always felt like when I got into the real world that I would just be stuck there.”

Though Nash has long held an interest in political philosophy and is a self-described news junkie, politics was always a distant second to music. The alternative country/indie rock artist in the vein of Neil Young put out his last solo record, encapsulating aural terrarium Israel Nash’s Silver Season, in 2015. Last year, he released Neighbors EP with fellow Austin weirdos The Bright Light Social Hour.

Nash said he occupies a similar music and social circle as the art rock band and an eventual collaboration always seemed more like a question of when than if.

“It’s less of a marketing ploy or something and more like, ‘Hey, look what we get to do for a living,’” he said.

The songwriter recently returned from a tour in Europe with popular southern rockers Band of Horses. Nash is signed to London’s Loose Music record label. His first two albums were picked up by a Dutch label and distributed widely throughout Europe.

Nash said his first major tours were across Europe, not the United States. He has always felt at home on the other side of the Atlantic Ocean. During his most recent tour, he particularly enjoyed trekking across icy Scandinavia.

“We hardly had snow at all in Texas this year, so it was actually my taste of winter,” he said.

Nash mostly pursued college under the insistence of his parents. He is proud of his graduate degree, but not as an elitist.

“A master’s degree, it’s somewhat impressive, but it’s not a law degree,” he said. “It’s like, ‘Oh, that’s fair enough; you have a master’s degree in political science. That’s a good conversation piece, but you’re not that smart, dude.’ It’s not like I’m a doctor.”

Heading into NMF, the Missouri-born musician said he has always felt a special kinship with Oklahoma, not just as a neighboring state but as a people with a similar temperament to those in his former home. Nash is also eager to play in a festival setting, where his layered and atmospheric tunes can truly shine.

“There’s something kind of spiritual and warm about a festival — just a bunch of people coming together and music outside,” he said. “There’s a simplicity to it, and it’s just a good time.”