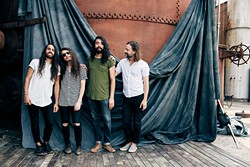 “I think it’s amazing that OKC has such a lively pride festival,” Bright Light bassist/vocalist Jack O’Brien told Oklahoma Gazette. “We were totally honored to be a part of it and do what we can to help spread the message of love and that love will always prevail.”

The band is excited to bring its eclectic style to OKC Pride Week, but this performance almost didn’t happen.

Guitarist/vocalist Curtis Roush was going to be out of town, and the concert is on O’Brien’s birthday, so he already had plans.

But because the band’s manager forgot to decline the invitation, the band members changed flights and plans so they could make it.

O’Brien said they’re happy they did.

“It’s a pretty cool way to spend my birthday,” he said.

This show is more than just a fun night for the band; O’Brien said it’s an important reflection on the value of love and their relationship with the city.

“We stand for love, ultimately, at the very core of what we do,” he said. “I think we identify with the struggle of any community, particularly the gay community. There’s not really anyone else that’s oppressed in a way that directly affects love.”

When he last visited Oklahoma City, O’Brien met and befriended a group of self-professed gay men. They had a fun night out, and he asked them about what it’s like to be gay here.

They admitted that it’s not an easy place for them to live and said they want to leave if things don’t get better.

This idea echoes in the band’s most recent album, Space Is Still the Place. It was inspired by the band’s interactions with disadvantaged individuals in the South while on tour.

The title comes from jazz musician Sun Ra’s movie Space Is the Place.

In the film, a prophet predicts that the human race will bring about its own destruction but all black people in the world would escape to another planet in order to survive.

“Basically, [they would] start a life free from all the oppression that they’ve experienced throughout history,” O’Brien said. “We just really liked that idea of oppressed people looking to space as a way to start fresh.”

O’Brien met Roush while attending Southwestern University, located near Austin, Texas. They discovered drummer Joseph Mirasole on Craigslist. He was working at a music shop with keyboardist Edward Braillif, who soon joined the band, too.

O’Brien said The Bright Light Social Hour’s name comes from Indian activist Arundhati Roy’s idea that activists are meant to cast a bright light on the dark parts of society.

“We really liked that concept,” O’Brien said. “It was kind of a mission statement for our band to use music to shine a light. The social hour part of it [was because the band] always felt like a very inclusive community.”

The bassist admitted that he and Roush were not particularly ambitious about the band at first, but they now have a distinct style.

“We take a lot of really disparate elements, mix them together, put them all in a pressure cooker and see what comes out,” O’Brien said.

Deep thinking and social awareness are nothing new for their band or their recent collaborator Israel Nash.

After putting together a local voting rally, the artists released the Neighbors EP. The collaboration was borne from the social and political awareness that both artists explore in their music.

Along with this release, the band wrote the theme song for the Amazon series Sneaky Pete, starring Giovanni Ribisi. They were happy that their song was chosen even though they aren’t necessarily fans of the show.

“I heard it’s really good, but I haven’t watched it yet,” O’Brien said.

The band is likely too busy to watch the show. The bandmates are currently in the early stages of writing their next album. Its most recent release is “Tear Down That Wall.”

Although this title can easily be connected to a certain situation, O’Brien described the album as a whole as, “more seductively political.”

He feels that many people turn away from music that is obviously or angrily political.

Instead, their observations and opinions will be expressed “in a more layered way.” The band doesn’t want to tell listeners what to think but simply wants to share different opinions.

“For me, it’s more interesting when the music itself is intriguing and that pulls you in,” O’Brien said. “Then you listen to the lyrics and you’re realizing, ‘Oh. This is about this situation.’ I think that’s actually a much more effective way of sharing ideas. It’s there if you want to look for it, but if you don’t, it’s not all up in your face.”

Although the band is focusing on its album, it plans to turn the free OKC Pride concert 8 p.m. Friday in 39th District, NW 39th Street from Pennsylvania Avenue to Youngs Boulevard, into one big party, and everyone’s invited.

“Life is too short not to celebrate love and to fight for love,” O’Brien said.