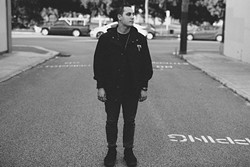 Australian electronic dance music (EDM) producer Zeke Beats has never been to Oklahoma, but he knows he already has fans here and in several other places he has yet to visit.

It is a surreal sensation.

“It’s such a thrill. Like, it doesn’t even seem real,” Zeke said in a recent interview with Oklahoma Gazette. “But I’m super thankful people actually know my stuff and make it out to these shows. It’s such a good feeling.”

The producer from Perth, Australia, released his latest Dispatch EP this spring. Some local EDM fans might know him as a protégé of Oregon-based DJ Eprom. Zeke’s 2016 Meltdown EP included a title-track single that made it to the second round of Grammy Award voting.

His Oklahoma debut is set for Aug. 4 during Bass Stampede — a collaborative EDM concert and dance party presented by Subsonix and Vibe Tribe — at Kamps Bar and Lounge, 1310 NW 25th St.

Before he ever started producing music, Zeke was perfecting his scratching skills as a competitive turntablist. He grew up the youngest of four brothers in rural Australian seaside town Geraldton.

When he was 13, his music teacher in school was from the United Kingdom and had a passion for house music. Using money from his classroom budget, the teacher bought a pair of turntables and a mixer for his students to use. Zeke, whose older brothers were already into electronic music, said he would frequently come in during lunch and recess to experiment.

A few years later, he finally got his own set of decks, getting into competitive scratching at around age 18. He excelled in the field, winning the Australasian International DJ Association (IDA) championship in 2009 and climbing as high as fourth in the world rankings.

Getting into championship form took practice, of course, but Zeke said it was never something he looked at as a chore — quite the opposite, in fact.

“From my perspective, I was having heaps of fun just fucking around,” he said.

After his IDA championship, Zeke began focusing on his music production skills. Still, he has not abandoned the turntable skills that earned him so much acclaim in the past. He regularly incorporates his scratching and pro-level turntable technique into his live sets.

“Having that prior DJ history definitely helps me now,” he said, “because when people come out to see me, a lot of times, they know me as a producer but they don’t know my DJ accolades from the past. It’s an amazing feeling to wow people with my production, but also my DJ skills.”

Zeke seems to excel at most of the music-related ventures he finds himself in. But the producer said it is not the success that motivates him.

“Even if I wasn’t doing well with my music, what’s important to me is that I do have a passion and I know what I enjoy,” he said. “I’m super thankful to have that and understand that.”

Zeke is not only eager to meet his Oklahoma followers for the first time, but make new impressions on those who come out to the show but have not heard his music yet.

“I can guarantee if they come out to the show, I will impress them,” he said. “I’m confident in that.”