“I was pleasantly surprised when I visited there, actually, that I wasn’t totally far off,” she said. “I didn’t end up changing anything.”

Before Brooklyn-based writer Rae Meadows visited the Oklahoma Panhandle last summer, she had already familiarized herself with the drought-ridden state of more than 80 years ago.

Meadows spoke to Oklahoma Gazette in advance of the Aug. 9 release of her third novel, I Will Send Rain, which depicts how members of the Bell family cope with remaining in Oklahoma during the Dust Bowl. Annie, the mother, finds herself drawn to the mayor, while her husband Samuel loses himself in evangelicalism and children Fred and Birdie hope for a better future.

Inspiration for I Will Send Rain came to Meadows in the form of a 1936 Dorothea Lange photograph of a mother and children migrating to California, positioned in the classic pietà pose. Meadows, who studied art history, appreciates Lange’s photography aesthetically, formally and for the “emotional core” it provided for her novel.

“To me, it was all about [the mother’s] face,” Meadows said. “Her face got to pierce me in a way that spoke to the roots she had left and also the hardship that she faced … being the one person who seems to be holding it together, who has to hold it together.”

This curiosity about the woman in the photograph bloomed into a larger examination of the interior lives of women in the 1930s.

“Women had a very specific role,” Meadows said. “The moms and the women had to step in in a way that was pretty extraordinary. That got me thinking in a narrative way about this woman and about what life was like that she left. How bad was it for her to leave?”

Although Meadows admitted she had limited knowledge of the Dust Bowl prior to writing I Will Send Rain, she extensively researched the era to lend authenticity to her work.

Writing historical fiction proved freeing for Meadows. She said she enjoyed writing in a world devoid of modern technology, where answers are less immediate.

“I loved immersing myself in the period of the ’30s,” she said. “It’s incredibly foreign … to read about and kind of understand how life worked then.”

However, she also knew she must carefully walk the line of historical fiction.

“I think too [many] period details can start to feel like a play set,” she said.

She had to strike a balance between the epic scope of the Dust Bowl and the focus of her novel, the Bell family.

“You can’t write about the ‘big things,’” she said. “You have to grasp onto the smallest part and the smallest details and hope that in telling that smaller story, you get at part of the larger story.” 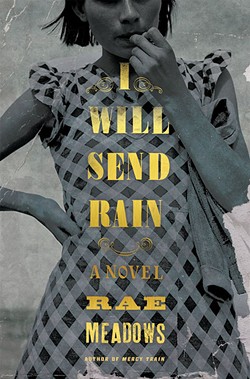 Meadows knew that the Oklahoma of I Will Send Rain would likely be different from the one she visited.

“I wanted to create this combination of research and of a fictionalized place in my head,” she explained. “That, to me, somehow makes it easier to write about a place, if I can kind of create this thing in my head that may be slightly different than the real place.”

After finishing the novel, Meadows finally traveled to Oklahoma.

“I was pleasantly surprised when I visited there, actually, that I wasn’t totally far off,” she said. “I didn’t end up changing anything.”

Her visit provided an answer one of the central questions in I Will Send Rain: Why did families stay, despite the harsh physical and emotional ramifications of the Dust Bowl?

“I found [that in] the people, even in the Panhandle, most of whom had been there, their families had been there, for generations, there’s a real feeling of place and a pride of place that I find quite moving,” she said.

Oklahoma’s physical landscape also left an impression on her.

“The biggest surprise for me was how beautiful it was,” she said. “It was really stunning. I could see why this was a place that held such a sway for families that had lived there for so long.”

Meadows said she thinks her next project might also take place in Oklahoma, in modern times.

“If something that I have written and have thought about and obsessed over can cause any kind of emotional reaction in someone else, I think it is a pretty incredible place to be,” she said.

Print headline: Rain maker, In her fourth novel, I Will Send Rain, author Rae Meadows forges a personal connection to Oklahoma’s resilient past.